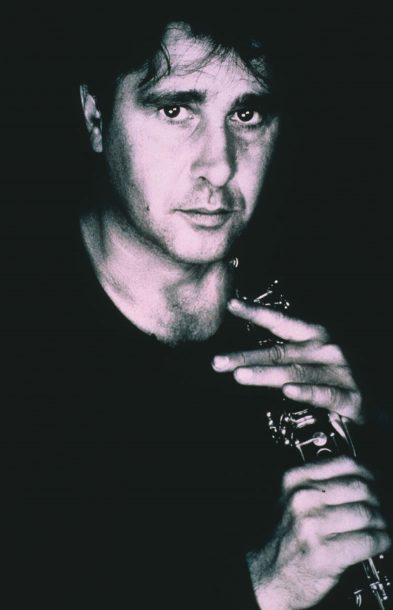 Outside films like ‘Round Midnight and Mo’ Better Blues, in which jazz musicians are central characters, it is rare that a jazz soloist/composer makes an impact upon a film like Sonny Rollins did on Alfie or Gato Barbieri did on Last Tango in Paris. Arguably, a film’s dialogue places constraints on its score, which works against the expansive tendencies of a jazz artist. French clarinetist/composer Louis Sclavis was unencumbered by that limitation, however, in creating the score for Dans le Nuit.

One of the last silent films made in France, this strangely alluring 1930 story of tragically betrayed love foreshadowed French filmmakers spanning Jean Renoir and Jean Cocteau. The only film directed by its male lead, Charles Vanel-who decades later would shadow Cary Grant in Hitchcock’s To Catch a Thief-Dans le Nuit employed bold camera movement and precious special effects. Its restoration and recirculation-a painstaking process championed by ‘Round Midnight director Bertrand Travernier, who engaged Sclavis to write and perform the score-is a major event in French cinema.

“It was a great responsibility,” Sclavis says of composing the score for clarinet, violin, cello, accordion and percussion, recently issued Stateside by ECM as Dans le Nuit. “The rhythms of the movie are very strict, and it’s not so easy to understand every part of the story. So, you have to write music that’s precise to the second, but doesn’t change or explain the movie. It’s much harder than writing for a regular movie.” Sclavis adds that despite consciously subordinating his personality to the demands of the film while composing the score, the recording and subsequent performances “allowed my personality and the other musicians’ to come back into the music, but not that much. It makes the music very direct, but it doesn’t take away from the movie.”

Far from being comprised of dangling fragments, Sclavis’ French-hued score is brimming with pieces that stand sturdily on their own, evoking vivid emotions spanning spine-tingling suspense and flush-faced romance. Throughout the score, Sclavis shows remarkable finesse in extracting contrasting emotions from his themes, his reworking of the main waltz to reflect wistfulness, despair and joyous redemption being the case in point. His choice of instrumentation is inspired, as the ensemble is capable of conveying both folkish charm and artful subtleties. In this regard, the performances of violinist Dominque Pifarély (a stalwart of previous Sclavis ensembles), cellist Vincent Courtois (a member of Sclavis’ new quintet) and accordionist Jean Louis Matinier are integral to Sclavis’ nuanced music. In short, this is an immensely satisfying recording, whether one ever sees the film or not.

Still, Dans le Nuit represents only one facet of Sclavis’ music. Other equally vital aspects are represented by another ECM album, 2001’s L’Affrontement des Pretendants, which features his new quintet. Sclavis’ improvisational gifts are much more out front on this recording; in addition to his sleek-lined, lustrous clarinet solos, Sclavis also hands in engaging solos on bass clarinet and soprano saxophone. His writing is far more expansive, particularly his 17-minute suite, “Hommage à Lounès Matoub,” which uses sinewy themes fueled by North African rhythms to create an ultimately triumphant portrait of the Algerian protest singer, whose 1998 assassination sparked riots in the terror-ravaged former French colony. Most importantly, the album documents Sclavis’ time-honed bandleader skills. In addition to introducing the exceptional Lyons-based trumpeter Jean Luc Capozzo to North Americans, it documents the quintet in its infancy, a stage when few leaders would venture a major recording. Yet Sclavis saw an opportunity to capture the moment when musicians and materials first come together to become an ensemble and a new batch of compositions becomes its book.

“All of my projects start with the musicians,” Sclavis explains. “I am as interested in who they are and what they think as what they play. I had been touring with my trio [with bassist Bruno Chevillon and drummer François Merville, who also rounds out the Dans la Nuit quintet] for almost two years. These are musicians I have worked with for 10 to 20 years. I think to have the music reach a level of sophistication, it’s important to have these types of relationships. But I wanted a group with these kinds of relationships and new ones. So I did trio concerts with guests. Both Vincent Courtois and Jean Luc Capozzo were guests at first. That’s how I decided on the players for the quintet. Even though this is my first group with a trumpet, I did not look for a trumpet player. I found Jean Luc Capozzo, who plays very straight things, but can play very crazy things, too. There are not many trumpet players who can do both. I think this process worked very well. We are now a quintet.”