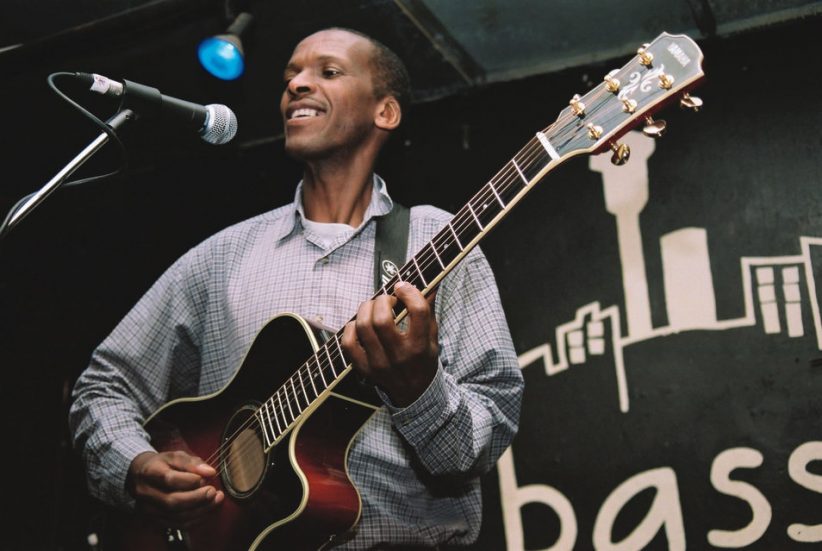 Guitarist Louis Mhlanga’s story might almost be the story of the instrument he plays. The lanky, soft-spoken player is a South African, but he was raised in Zimbabwe (“Listening to rock ‘n’ roll and Jimi Hendrix,” he says, “and a lot of Congolese music, too”), schooled in Botswana (“We had a smanje-manje band, copying Zulu pop music from South Africa”) and a regular visitor to cousins in Mozambique.

Studies in London exposed Mhlanga to West African music, which he followed up with a residency at King Sunny Ade’s Nigerian studio before returning to Zimbabwe and then settling in South Africa. He’s been a sideman for artists like Thomas Mapfumo, Miriam Makeba and Andy Narell and has collaborated with others as diverse as Malian singer Habib Koite and Dutch free jazzer Paul van Kemenade; he’s contributed music to film and ballet projects as well. Mhlanga’s just released his third album as leader, Tinganekwane (Sheer Sound), which means “once upon a time.”

A century and a half ago, it was the guitar that linked memories of home all across the continent. Migrants found themselves lodged together as contract workers in bleak mining dormitories or shantytowns. They came from many places, and their music borrowed freely from neighbors with different traditions (and, later, from the radio) to create innovative urban styles. Of course, it’s this history that gives Mhlanga his many-branched family tree and his music its diversity, from irrepressible Afro-rock through rhythmically complex echoes of Zimbabwean mbira music (the Zimbabwean thumb-piano is one of the wide range of southern African musical traditions he studies and teaches), to intricate modern jazz improvisation.

Mhlanga’s first album as leader, Mukai, presents songs constructed on folk and Afro-pop roots, while his second, Song for Nomsa, is a duo with Dutch jazz contrabass player Eric van der Westen that showcases improvisation. That partnership was born during an impromptu after-hours studio jam in 1998, when Mhlanga was visiting the Netherlands for an mbira project. One song, “Zvinoshamisa (It’s a Pity),” found its way around the world as the soundtrack for an Oxfam MTV child-rights video.

“In the beginning, Eric and I spent a lot of time trying to find each other and exploring the musical bridges across the space between us,” Mhlanga says. “Now, the minute we stand beside each other-it’s there.” The guitarist and bassist developed a fondness for and facility with odd, intricate rhythm patterns separately. Mhlanga learned those young: 7/4 is almost Zimbabwe’s national sound. Van der Westen caught up with them in the challenging environment of the European improvised music scene.

Mhlanga’s third album, Shamwari, was “my instrumental project,” he says. “A lot of the tunes were written at the same time as the music on Tinganekwane, but I wanted to foreground the guitar on Shamwari and have fun with extended solo breaks.”

Tinganekwane, by contrast, returns to vocal roots. “I’m not a singer, and in the beginning when I made Mukai, it was very experimental; I was trying to find a voice and a style,” Mhlanga says. “Finally, I think I understand how to make it work and I’ve come back to it.”

The songs draw from a pan-African real book. “Mari Hakuna” is Mhlanga’s riff on a kora theme first played by the Grand Rail Band of Mali. “I heard it and fell in love with it,” says the guitarist. “I think kora music-those roots-are very significant. All African-derived music rests on those kinds of scales.” “International Rumba” dates from the early 1990s, when Mhlanga was working with Zimbabwean super-group Musik Ye Afrika, with bassist Jimi Indi and legendary late drummer Jethro Shasha. “We were doing a soundcheck and my mind filled up with this tune. All the patterns came to my hands one after another, and Jethro, as a master of the drums, knew exactly how to fill them. I was looking for the feel of Congolese music in the days of Franco, before the sound got big and electric and busy.”

Many of Tinganekwane’s songs share social themes: poverty (“There are all these golden cities in Africa, but where has the money gone?”) and the need for free speech and cooperation. Does he have any particular regime in mind? “No. Those things go on everywhere. Music can tell leaders a lot, if they only listen.”

There are other projects on the horizon. Mhlanga’s just finished a tour with Madagascar accordionist Regis Gizavo, which he hopes will turn into an album. “It was challenging, trying to find the different kinds of spaces with Regis. We ended up playing bass lines for one another’s improvisations, which made a very interesting texture.”

In August he’ll release a second duo album with van der Westen: Keeping the Dream. The title track is about “working your ass off as a musician, traveling for days only to find an audience of 10 people; coming home to another pile of bills: all the stuff you have to do just to be able to keep on playing. It has a sort of melancholy country & western feel.”