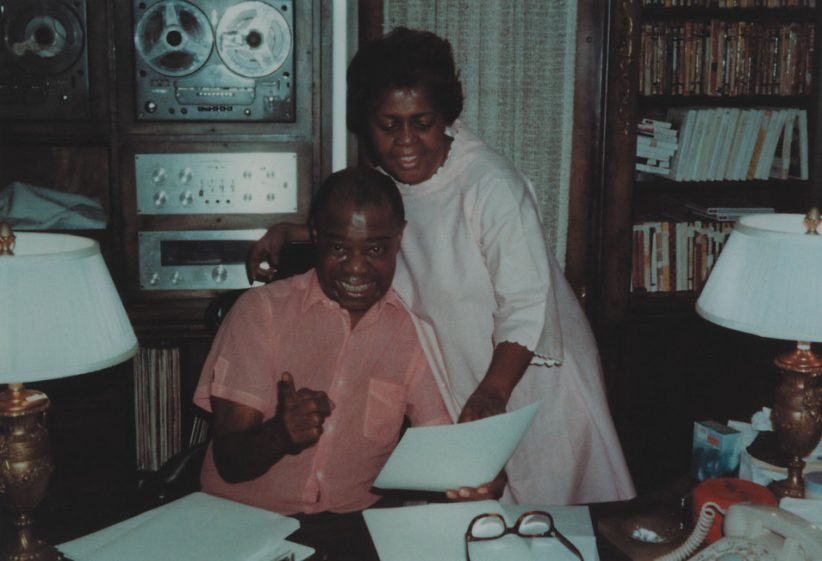 (Although he was perhaps the 20th century’s most prominent world traveler, Louis Armstrong resided with his wife, Lucille, for the last 28 years of his life in a two story house in Queens, where he quickly became a neighborhood fixture. After his death in 1971, Lucille kept the house as a shrine to Satchmo until she died in 1983. The house became a national landmark in 1977, and a New York City landmark in 1988. We obtained and excerpted the following writings from the Louis Armstrong House and Archives, Queens College. For more information about Armstrong and the Archives, visit www.satchmo.net.)

When my wife Lucille and I moved into this neighborhood there were mostly white people. A few Colored families. Just think-through the 20 years that we’ve been living in this house, we have seen just about 3 generations come up on this particular block-07 Street between 34th and 37th. They still come and visit Aunt Lucille and Uncle Louis. And when there’s (a) death in our block Lucille always bake a turkey, ham, etc. and put it in a big basket and take it over to the house. So people who come and sit up with the deceased will have sandwiches, coffee, etc. Recently 8 people has died since Louis Armstrong came out of the hospital. Even the new neighbors get to know us.

That’s why Lucille and Pops feel that we should not move. We don’t think that we could be more relaxed and have better neighbors any place else. So we stay put. After all-we have a very lovely home. The house may not be the nicest looking front. But when one visit the interior of the Armstrong’s home, they see a whole lot of comfort, happiness and the nicest things. Such as that wall-to-wall bed and a bathroom with mirrors everywhere since we are disciples to laxatives. A garage with a magic up and down gate to it. And of course our birthmark car, a Cadillac (Yea). The kids in our block just thrill when they see our garage gate go up and our fine Cadillac ooze on out.

At home where we live in Corona is so lively. We have two dogs. They are Schnauzers, male and female. And they are two very fine watch dogs. They not only bark when the door bell rings, but anybody who comes up our steps and they bark their (a)spirin off. The male dog is the older one and his name is Trumpet. The female, the baby, her name is Trinket. I gave Trumpet to Lucille and Mr. Joe Glazer gave us Trinket. And when the two of them start barking together, oh boy what a duet.

On my sixty-ninth birthday, all of the kids in Corona where I live came in front of my home and wished me a Happy Birthday, which thrilled ol’ Satch. Saying carry on until you’re a hundred years old.

Just want to say that music has no age. Most of your great composers and musicians are elderly people, way up there in age and they will live forever. There’s no such thing as on the way out. As long as you are still doing something interesting and good. You are in business as long as you are breathing. Yeah.

First professional music experience: Playing a tin horn to attract business for the junk wagon owned by the Karnoffsky family in New Orleans.

Favorite pastimes: Writing and recording his experiences and thoughts; watching Westerns on TV.

Approximate value of Armstrong’s estate at the time of his death: $530,775.

Approximate value of manager Joe Glaser’s estate at the time of his death: Over $3,000, 000