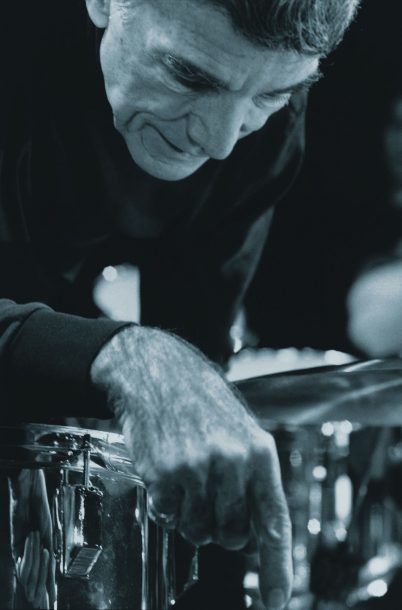 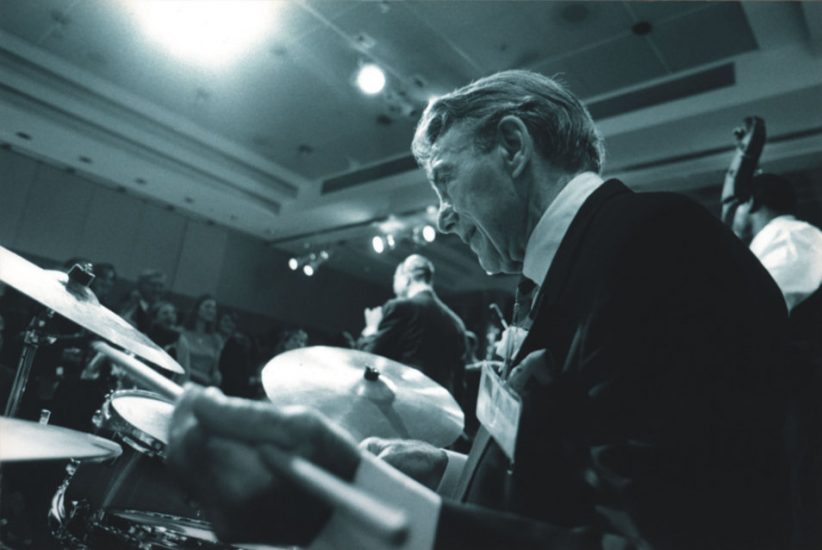 At age 75, rest assured that drummer Louie Bellson has not lost his touch. His gifts today remain as strong as ever, and he can still power a big band or groove with a small combo with his characteristic technique, style, and seeming ease. He is, in fact, a consummate musician, one whom Duke Ellington described as “not only the world’s greatest drummer, but also the world’s greatest musician.”

“Duke was being over-generous when he made that statement,” said Bellson from his home in California. “I’m embarrassed by it. Just to have Duke play something that I wrote is enough praise for me.”

And Bellson means what he says. Even though he has had a magical career marked with honors and awards for more than 60 years and has worked with bands headed by Basie, Benny Goodman, Tommy Dorsey, Harry James, Woody Herman, and others, Bellson still regards his greatest accomplishment as the day Duke asked him to bring in a couple of arrangements:

“That happened when I first joined the band in 1951; Duke had to ask me three times because I was scared to death. He and Billy Strayhorn were two of the greatest-I had to wonder what these guys wanted with me. But after the orchestra recorded “Hawk Talks” and “Skin Deep,” I realized what a great opportunity I had before me. Max Roach said that I was the only guy he knew who ever had Duke ask him for arrangements.”

On the occasion of Duke’s 100th anniversary year, the classic 1952 recording of Bellson’s Skin Deep has been re-released by Verve as a limited-edition CD, featuring both the Ellington orchestra and small-group arrangements.

The Ellington centennial also saw Bellson in Europe touring with his Ellington Reunion Band. The band brought together many surviving members of the original orchestra: “We had cats like Buster Cooper, Norris Turney, Art Barron, Jimmy Woode, Aaron Bell-all those wonderful guys,” he said. Bellson also recently completed a concert at Grace Cathedral in San Francisco, recreating Ellington’s Sacred Music Concert just as it was done 50 years ago.

He regards his time with Duke as the pinnacle of his career, while realizing at the same time that the other bands he played with were indeed legendary. “But Duke took everything a step ahead,” he said. “He not only played ballrooms and theaters, like everyone else in those days, but he also extended himself as the first big band to play sacred music at Grace Cathedral. He also bridged the gap with symphony orchestras.” Bellson recalls concerts with Toscanini’s NBC orchestra and several with the New York Philharmonic: “Duke was doing things way out front of everyone else.”

Bellson knew almost from birth that he was going to be a drummer. He picked up sticks as a three-year-old tot and never looked back. “What got me notoriety was when Gene Krupa-a dear friend and one of the greatest drummers of all time-had a contest in 1941, sponsored by Slingerland. About 40,000 drummers were involved and I won it, which earned me a lot of publicity in the jazz press. Right after that, I got a call to join the Ted Fiorito band, and while touring in California, Benny Goodman’s brother, Freddy, heard me play and said he liked my work.”

The Goodman band was in California at the time working on a motion picture. With brother Freddy’s endorsement, Benny called Bellson to audition, and young Mr. Bellson found himself in the movies: “When I got there, I heard Benny say, ‘Give that young drummer a tuxedo and send him to makeup.’ Playing in the movie was also my audition for the band-and I got the gig. Benny was a great musician and had a wonderful swing band.”

Bellson, of course, is well known for his pioneering of the double-bass drum set-up, which he conceived in 1938 while in high school and put into practice during his time with the Fiorito band-an idea that generated interest almost immediately.

“When I joined up with Duke in 1951, the double-bass setup really became big, mainly because the orchestra got a lot of exposure,” he said. “Duke loved the idea! He was not only a great musician, but also a showman who loved the theatrical aspect of performing. When I told him I had a revolving platform, he really flipped. At the push of a button in the middle of my solo, I would revolve around so that the audience could watch my feet move. I think Clark Terry was the guy who pushed the button and gave me a ride every night.”

When one has been playing for as long as Bellson, the list of inspirations grows proportionately. Benny Goodman, Harry James, Count Basie and the Duke were all singled out, with the list growing longer when Norman Granz asked Bellson to join Jazz at the Philharmonic. “I then had the chance to play with Oscar Peterson-who I think is one of the greatest of all time-with Ray Brown and Herb Ellis. I also worked with Ella, with a front line of Dizzy, Roy Eldridge, Clark Terry, Zoot Sims, Flip Phillips, J.J. Johnson and Lester Young. That was one marvelous experience, thanks to Norman.”

Bellson still loves to write, and he again looks back on the years with Ellington as inspiring: “I used to watch him every day. One time, we were on a train and Duke was concentrating on the click-clack of the wheels rolling on the rails. He told me that was how he wrote ‘Happy Go Lucky.’ Another train trip saw Duke take off his jacket and draw a staff with eight bars of music on his sleeve because he had no manuscript paper. Duke never let an inspiration go by.”

Bellson now has ten major works for orchestra under his belt at present and he is looking forward to a gig next year at the University of Southern California when he will debut his own sacred music concert, presented with a big band, choir, strings and woodwinds.

Being in a university setting is also appropriate for Bellson, who is passionate about passing on his knowledge to younger players. “Two of my teachers were Joe Jones and Big Sid Catlett,” he recalled. “They showed me tricks of the trade and told me to pass what I’ve learned on to others. So when I tell young drummers what Big Sid showed me about cymbals, or what Joe Jones said about brushes, they eat it up, because it’s coming from the guys who created it.”

Marriage, too, has been a blessing for Bellson, who looks back on his years with his late wife Pearl Bailey with great memories. “She was one of a kind,” he said, “and a singer who had perfect pitch. She started off as a dancer, but singing came so easy for her. After she passed, I felt I would just write music alone, but the Lord has blessed me again with another wonderful lady, Francine, who is an engineer and physicist. I have to look up and count my blessings every day.”

Current drummers who have captured Bellson’s ear are Steve Gadd, Dennis Chambers, Marvin “Smitty” Smith, Peter Erskine, Dave Weckl, and Vinnie Colaiuta-plus “many others who are gaining recognition. These guys can do anything.”

The Louie Bellson of 1999 is still excited by music and blessed with the ability to play to his full potential. “The hands and the feet are manipulating very well and my health is good,” he said. “I really feel that I can still do it. When I realize that I can’t do it anymore, then I’ll gracefully bow out, but, based on everything I’ve been doing this year, things have been wonderful. I just sit down at the drums and do my thing. The toughest part for me now is putting on my bow tie.”

For equipment, Louie has relied on Zildjian cymbals for 60 years and endorses Remo drum equipment, which is celebrating the drummer’s 75th birthday with a limited run of 1,000 snare drums; all with 14-karat gold hardware and each one personally autographed by Bellson. “I just finished autographing the last one,” he said. “I’d rather play a year of one-nighters than do that again.”

Louie’s listening pleasures are universal, with the basic being good classical, particularly Ravel, Stravinsky, and Bartok. “I also try to be up on the new things coming out; I’m listening to Explosion: Milt Jackson Meets the Milt Jackson-Clayton Hamilton Band, and I can’t wait to hear the new recording from tenor player Pete Christlieb, his first as a leader in about ten years, with some arrangements by Bill Holman and Johnny Mandel. Pete said it came out beautiful.”