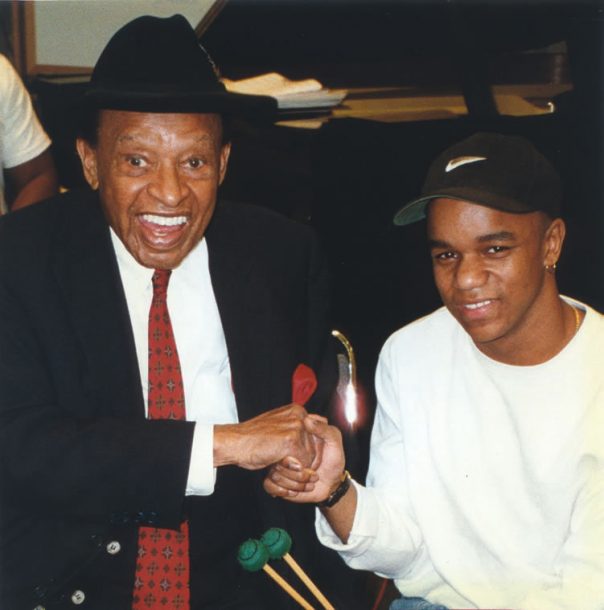 My first encounter with Lionel Hampton occurred 23 years ago. I was six years old, growing up in a single-parent household on the ninth floor of a housing project in Albany, N.Y.-just another kid looking at a world of possibilities, yet with very few opportunities. I remember seeing Lionel Hampton on television, bubbling over with enthusiasm. He was in his prime, full of life, smiling, dancing and apparently having a great deal of fun.

It was an infectious type of fun.

I jumped up and began to dance around pretending I was playing one of those giant spaceship-looking xylophones like the man on television. Then I remembered that I had a little Fisher-Price xylophone in the closet. I ran to get my xylophone; it wasn’t very big, so I brought it back in front of the TV. My instrument looked pretty cool, too; it had red wheels and a little string to pull it along. Each of the notes was a different color and they all had their own names (C, D, E, etc). Ding, ding, ping, ping, pow-I was off, jamming my first improvised solo with Lionel Hampton. I didn’t know his name at the time, but we jammed anyway. There was only one mallet, which was attached to the end of the instrument by a string. I remember pulling it off so that I could really “get down” like the man on TV. Of course, I got in trouble for that later on when I couldn’t find the mallet.

Lionel Hampton had permanently etched in my brain the idea that freedom and fun were a part of music. If I couldn’t have fun and feel free playing a piece of music, then I didn’t want to have anything to do with it! Hamp’s performance on television that day lit a fire in me, which would later burn down countless barriers standing before me, revealing lessons and opportunities extending far beyond the realm of music.

Seventeen years, two college degrees and several thousand frequent flyer miles later, I finally had the chance to see live in concert the man who had given me such purpose. I was in Wynton Marsalis’ band and we had just come off the stage at the New Orleans Jazz Festival. Anxiously, I awaited Lionel Hampton’s performance. His band fired up a tune and began to thump as Hamp was slowly escorted onto the stage. He wasn’t nearly as nimble as I remembered him on television all those years ago. I began to wonder, “How can he possibly play the vibes if he can barely walk?” Watching his approach to the instrument, I felt nervous.

Be-bop-do-ba-da-du-wa-“somewhere there’s music….” The first five notes he tapped out on his vibes were filled with such passion, joy and swing that the audience could barely contain itself. People, young and old, jumped to their feet and began to cheer. The love and enthusiasm Hamp generated from the stage that day washed over me like a cool breeze. To see him live was a completely different experience, and it set that fire in me again. I began practicing at a feverish pace-I needed to get closer to that level of expression.

It would be two years before I would have the chance to meet him in person. Jazz at Lincoln Center was giving a concert at Avery Fisher Hall in honor of Hamp’s life and music. I was assigned the formidable task of playing the vibraphone parts on some of his most well-known charts. For the big finale, Hamp and I would play a song together. The announcer introduced him: “Ladies and gentlemen, please welcome to the stage, Mr. Lionel Hampton!” I was already on stage in front of the vibes, so I stood there in awe and watched him make that familiar, slow and deliberate approach to the vibes. He shook my hand and said, “Do you know ‘Red Top’?” “Yes, sir,” I replied with a timid smile. “OK then, here we go.” Those were the last words I heard from him before he proceeded to swing me completely under the table. With every note he played both our smiles seemed to grow more and more broad. You couldn’t tell which one of us was more excited. Chorus after chorus we traded, with Hamp stepping it up a notch at every turn. What a lesson I got on stage that night in front of several thousand people! That night I learned that great music is largely made of great intentions, not just the right notes.

After the concert, Hamp greeted me with a smile and said, “Yeah, Gates”-he liked to call everyone else by his nickname-“You were swingin’ kid, yeah, you were swingin’!” Needless to say, I left Avery Fisher Hall that evening more determined than ever, and I entered a new phase in my development. For this lesson, I will always be grateful. If Lionel Hampton’s one goal was “to be remembered for spreading happiness and goodwill,” then I’m living proof of his success, because through his gift of music, he has given me a lifetime of happiness.