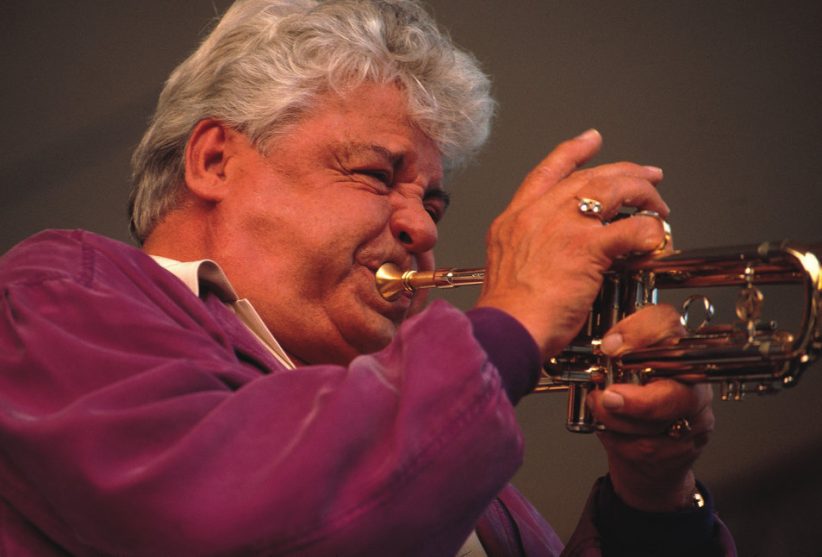 Print is most assuredly not dead. Nor is the oral history. If anything, the difficulties of bookstores have created a DIY submarket, in which projects heretofore viewed as commercial risks become unabashed labors of love, published via print-upon-demand or eBook or no-frills self-publishing. Case in point: the publishing of Maynard!, an collection of interviews about the colorful bandleader and trumpeter Maynard Ferguson, compiled and written by long-time jazz record producer Ralph Jungheim. The book really does have a no-frills look and feel to it, but the stories and testimony are hard to resist, whether you’re a fan of the pyrotechnic brassman or not.

Among the Maynard colleagues dishing out the love are Bud Shank, Mundell Lowe, Irene Kral, Peter Erskine, Lanny Morgan, Don Menza, Lew Tabackin, Shelly Manne and many more. Yes, some of those folks, like the subject, are no longer with us. Jungheim explained that he recorded the interviews back in 1978 around a performance by Maynard and his group in Santa Monica, California. After his wife transcribed the many hours of interviews, Jungheim had hopes of getting a book deal based on the interviews, but there were no takers from all the major publishing houses. “So I put it in a box and pretty much forgot about it,” said Jungheim. “Every once in awhile I’d take it out and read it, but then I’d forget about it.” It was Jungheim’s son who pushed him to do something with the box of material. “I had a bout with cancer about two and a half years ago, and my son suggested that I make it an eBook and finally get the thing out,” Jungheim recounted. He then did some serious editing and eventually pulled together the book as a print-on-demand project, and finally the book is now being sold at Ferguson’s fan site and Amaxon. Maynard! is also available from Jungheim’s Buster Ann Music. Take that, Simon & Schuster.

Interestingly, Jungheim used to review books for JT and back in 1997 he wrote a review of Bill Lee’s authorized biography of Ferguson. And you can read a heartfelt tribute to the bandleader from one of the group’s more prominent alums, Peter Erskine, who saluted Ferguson in the March 2007 as part of the Farewells section of that issue.

I told Jungheim that I was disappointed that the book didn’t contain my favorite Maynard story, which appears in Bill Crow’s seminal Jazz Anecdotes. Ferguson was touring somewhere in the Midwest and he’d hired a few Cessna airplanes to get from gig to gig. At one point, a storm was tossing around the small plane and its occupants. Whereby, Maynard stood up and announced, “I’m going to sleep, but if you see Glenn Miller, please wake me.” Jungheim laughed and said, “Yes, Maynard was a funny guy and very cool and composed.”