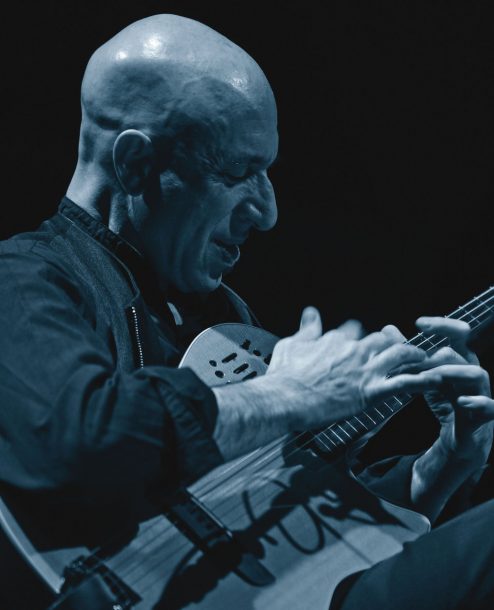 Lance Carter, who died Nov. 1, 2006 at age 51 from the very rare and incurable bone marrow disease primary amyloidosis, was a drummer of extraordinary power and intensity. Through the ’80s, ’90s and until the moment he became physically unable to play, Carter slammed with rare authority behind the kit, fueling several cutting edge ensembles on New York’s notorious Downtown improvising scene, most notably Sonny Sharrock’s band of the early ’90s and more recently Elliott Sharp’s Terraplane. Some of those groups and several of Carter’s comrades gathered at the Knitting Factory to celebrate his memory with music that was loud, throbbing with energy and occasionally over the top with sheer abandon … just the way Lance liked it.

Opening the concert in appropriately bombastic fashion was Robert Musso & Friends, a heavy metal free-jazz ensemble fronted by the guitarist-engineer and featuring fellow guitarist Raoul Björkenheim, drummer Sim Cain, bassist Dave Dreiwitz and the skronking Philly-based tenor saxophonist/flutist Elliott Levin, a frequent collaborator with avant-alto-sax icon Marshall Allen and a longstanding member of the Cecil Taylor big band. With Sims providing whirlwind intensity on the kit, Musso stomped on his distortion box for that Sharrock-ish crunch while Levin blew with furious abandon in the midst of the fray. In their more reflective moments, Levin turned to flute and Musso used his sustaining tones in a lyrical sense, and he also pulled out the slide on a couple of occasions to summon up the spirit of Sharrock’s “shards of splintered glass” effect. This kind of sonic mayhem is definitely not for everyone. But for those who grew up with the raw tumult of Hendrix and Cream, electric Miles and the Tony Williams Lifetime and later connected with the audacious onslaughts of Sharrock and the free-spirited skronking of John Zorn, Musso & Friends provided some searing, soul-satisfying highlights.

Sons of Sharrock carried on in that same cathartic vein. Powered by former Sharrock sidemen Pheeroan akLaff on drums and Melvin Gibbs on six-string electric bass, these Sons offered up some hellacious jams in the spirit of their namesake. Guitarist Ed Cherry, a longtime sideman with Dizzy Gillespie, played with uncharacteristic grunge, dancing on an array of effects pedals while summoning up some stratospheric, blues-drenched wailing on his ax. Erik Lawrence added strong tenor playing to the mix and David Snider supplied bristled comping on keyboards. Gibbs anchored the band with his thick, low-end grooves and also offered some wicked fuzz bass solos during their brief but explosive set, which closed on a frenzied note with a raucous rendition of Sharrock’s thrashing metal boogie, “Dick Dogs.”

Gibbs also appeared with Harriet Tubman, an outstanding power trio featuring drummer J.T. Lewis and the remarkably creative but unsung guitar hero Brandon Ross, who combines the linear facility and originality of Joyous Lake-era Pat Martino with the sheer decibels and cathartic abandon of Sharrock and the liquid whammy-bar articulations of Allan Holdsworth. Ross unleashed fuzz-inflected, wah-fueled licks and testified with overdriven bluetones during this searing set, which concluded with a frantic jam that reached a Bad Brains level of intensity.

Violinist Charles Burnham, a charter member of James Blood Ulmer’s Odyssey Band, performed a stirring solo set. Performing a cappella gospel-fervor vocals, accompanying himself on percussion, or playing blues-drenched, countrified violin, Burnham offered some much-needed breath after the electrified density of the first three bands. Burnham then joined with the members of Harriet Tubman to support vocalist Cassandra Wilson on two songs-a gospel number (with Ross on banjo) and a sultry rendition of Van Morrison’s “Tupelo Honey.” Carter played on Wilson’s 1993 breakthrough Blue Note album, Blue Light ‘Til Dawn. Fourteen years later, she returned (on crutches from a badly sprained ankle) to honor her fallen comrade at this moving memorial.

Percy Jones & Tunnels, the renegade fusion group featuring the extraordinary bassist and charter member of the British fusion band Brand X, perfectly straddled the jazz-rock divide with an energized set that put a premium on soloistic virtuosity (notably by MIDI vibist Marc Wagnon) and earthy grooves (courtesy of powerhouse drummer Walker Adams). With Jones alternately walking in blazing uptempo fashion and chording outrageously on signature pieces like “Barrio,” “Prisoners of the Knitting Factory Hallway” and “The Syzygy Incident,” Tunnels won over this audience with its freewheeling spirit and unabashed bombast (Carter appeared on the group’s live 2004 outing, The Art of Living Dangerously).

Live tracks from this all-star gathering will be available for download on Robert Musso’s Web site (mussomusic.com). This memorial concert also functioned as a benefit for the Jazz Foundation of America, with 100 percent of the proceeds going to this worthy organization that has been providing emergency help for jazz musicians in crisis since 1992.