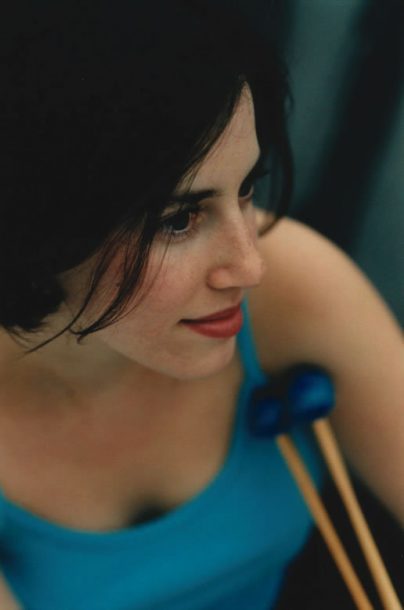 I interrupt Lalo, the vibraphonist who goes by one name, with a phone call while she’s listening to a late ’50s Sonny Stitt-Oscar Peterson Verve date and ask her what rock bands she likes best. After thinking for a minute, all she gives me is a story about how, as a kid growing up in Savannah, Ga., she found relief from the “bad country” that dominated local airwaves in the classic rock station. But then she says, “I didn’t really even listen to that very much.”

And that blows to smithereens my theory that progressive-rock royals like King Crimson and Yes were cornerstones in Lalo’s musical enlightenment.

There are loads of proggy vibe riffs in the bold and busy racket she raises with bassist Kermit Driscoll and drummer Todd Isler on her self-titled, self-released debut on her Kadooga label-but that’s just what I hear. According to Lalo, the highly melodic, stop-and-start runs that double back on themselves and evoke a toddler scrambling up and down a spiral staircase all derive from the sounds she’s had in her head since she wasn’t much more than a toddler herself, pecking out tunes on her family’s piano: “When I write I’ll hear something complex and I’ll try it on vibes and say, ‘Oh no, that doesn’t really work on vibes.’ But I never want to stop there. I’ll say, ‘OK, how do I make it work on vibes?’ And I end up writing a lot of things that I don’t think were maybe the most natural.” Her lines are cerebral, but despite the calculation, the CD Lalo escapes stiffness and exists as a playground made of sound, thanks in part to Driscoll and Isler, who somehow liquefy even Lalo’s most abrupt changes. It doesn’t swing, but you can dance to it.

Lalo (rhymes with “follow”) says she wants to test the vibraphone’s limits, push it into new places. “I’m not going to sound like Milt Jackson,” she says, adding that she loves Jackson and that Bags’ Groove was the first jazz she ever heard. “That’s not what comes naturally to me-and he killed it. I’m gonna spend how many years trying to do what he did?” To do her thing, Lalo, 24 and fresh outta Berklee, keeps a wide-open mind. She outfitted her vibes with pickups and sends the signal through distortion and delays, reinventing the instrument. She wants to use a sampling artist on her next album.

Before I let Lalo go back to her Peterson-Stitt and an afternoon of Brooklyn living, I admit to her that I thought she must be way into King Crimson. She’s silent, for a moment, but lucky for me, she’s not offended. “I’m always looking for new influences.”