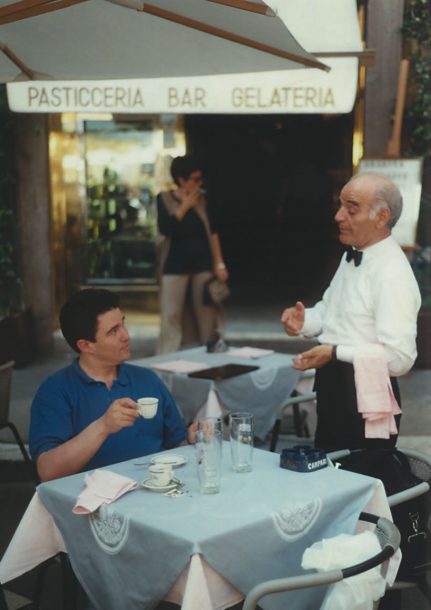 During his four-year tenure with Sphere Marketing, the distribution and promotional branch in North America for the Milan-based Black Saint and Soul Note labels, Frank Tafuri championed the cause of “creative music.” As the Stateside publicist for that adventurous Italian label founded by Giovanni Bonandrini, Tafuri regularly pitched the music of everyone from the World Saxophone Quartet, Andrew Cyrille, Cecil Taylor and Ran Blake to David Murray, Steve Lacy and The Herbie Nichols Project. His own personal passion for the music often persuaded writers to check out some new talent or consider covering some worthy recording that otherwise might have gotten lost in the shuffle. In that regard, Tafuri was always a champion of the music, well respected by both critics and musicians alike.

When Bonandrini finally decided to dissolve the American office in September of 1997, Tafuri parlayed his expertise in the business of marketing and promotion into a number of part-time consulting gigs for such labels as Malandro Records and GM Recordings.

Now the one-time publicist has emerged with his own adventurous label. As the head of his Brooklyn-based OmniTone Records, Tafuri takes a decidedly hands-on approach to being a record executive. Not only is he immersed in such things as scouting and signing artists, fixing budgets, hooking up distribution, plotting ad campaigns and properly promoting the music, he’s also engaged in writing all the liner notes and taking all the photos for each release.

“I never dreamed I would be doing this,” says the Cincinnati native. “But working with Black Saint/Soul Note I found out how much this job integrates a lot of different skills that I have developed over the years and things that I enjoy doing-communicating with people, understanding the music, doing photography and design work. As it turns out, I helped pay my way through college doing freelance photography and I had written a number of liner notes before I started with Black Saint/Soul Note. So I found that this job really put together a lot of stuff that I already knew.”

While all the artists on the OmniTone roster may fall outside the realms of mainstream jazz, Tafuri believes that there is a substantial audience for their kind of adventurous, challenging music. “I feel that saying my goal is to sell records is not a dirty thing to say. But it’s amazing how many guys that are out there doing ‘creative music’ believe that their music isn’t going to be worthwhile if all of a sudden it started selling a lot of copies. It’s a weird thing. They get into this mindset that ‘this music will only sell a thousand copies and we’ll be very happy with that. We’ll be martyrs.’ But that mentality is not treating the music with the right kind of respect. There are a lot of fans of this music out there. It’s just a matter of wading through the chaff to hook up with these people and make that connection.”

Prior to his experience with Black Saint/Soul Note, Tafuri worked in jazz radio for 13 years at a NPR affiliate, WVXU in Cincinnati. “I did a weekly show and founded a program there called ‘Bop Connection’ back in ’79. At that time a majority of music that was getting played at the station and a majority of stuff in the library was ’70s funk-fusion and ECM stuff. There wasn’t a lot of straightahead jazz so I was filling a niche there.”

Tafuri’s radio experience also includes two memorable years with the AM commercial station WNOP. “It was a small wattage AM station in Cincinnati that had a weird sunup to sundown license because they shared a frequency with a radio station in Canada that would come on at sundown. It was mainly a swing and bop-oriented station and what I introduced there was the more adventurous stuff, which they didn’t have a helluva lot of. I may have been the first person over there to play Ornette Coleman on the air. And on top of that, it was a floating radio station. It was really wild. It was a kind of barge that literally floated on the Kentucky side of the Ohio River. They had special tone arms on the turntables there so that when the weird craft that we were in would start rocking, the records wouldn’t skip. And then when the river froze over, which happened a couple times, people had to come up with inventive ways of relieving themselves.”

In the early ’80s, Tafuri also helped found a not-for-profit jazz support organization in Cincinnati called Stone Valley Jazz Fest Inc. “For 10 years we hosted an annual outdoor two-day jazz festival using a wealth of Cincinnati and area musicians while also bringing in artists from out of town.” It was during this period that he also began contributing record reviews to a publication called The Music Box.

An employment opportunity got him to New York in ’93. “I took a position working up here as a data base consultant specifically to try and find a gig in the music business, not knowing what I wanted to do exactly,” he explains.

It was during the summer of ’93 that he made his initial contact with Giovanni Bonandrini. “I was a great champion of Black Saint/Soul Note for years on WVXU,” he says. “I was the guy that was playing all that adventurous stuff at that station. And when I made my annual trip to Italy that year, I decided I wanted to meet Giovanni just to tell him how much I loved his label. I wrote him a letter in advance and he called me to arrange a meeting. When I got to Milan it turned out that Giovanni wasn’t there. His son Flavio apologized, explaining that he was tied up at the pressing plant. So Flavio and I had a great conversation, half in English, half in Italian. And by the end of the conversation he started pitching me on this publicity and promotion job that they had for their American company.”

Tafuri started with Sphere Marketing (which was based in a cargo area at JFK airport) at the end of ’93. “I worked for them for about a year and a half on a part-time basis just doing publicity and promotion,” he says. “And it became evident to me that it was really a full-time position. It took a while for them to make me an offer that was reasonable enough for me to quit my other job-and I took a big pay cut to go to work for them. But I was so knocked out with the thought of actually representing those labels here.”

Not only did he function in a publicity/promotion capacity, Tafuri also showed some A&R insight in bringing the critically acclaimed Herbie Nichols Project and vocalist Anita Gravine to the label. “I did pitch several things to them,” he says. “Some of them they took but there were several others that they weren’t interested in that I felt were very worthwhile. And I continued to have relationships with some of these people after leaving that job.”

Following his consultant work for GM and Malandro, and a brief stint as publicist for the Arkadia label, Tafuri began to lay the groundwork for his own label. “I got to the point where I felt there was a need to have a label that was going to put creative music out there and really support it and package it in the right way. And in some ways, OmniTone is a continuation of the work that was abruptly ended at Sphere. I had made a lot of strong relationships during my time there (Tom Varner and Frank Kimbrough, among others) and I wanted to use those strong relationships to try and launch a label. And now we’re trying to make a go of it.”

In addition to managing the label, Tafuri is also doing some online retailing on the OmniTone site (www.OmniTone.com) for hard-to-find labels and artist-produced CDs. “We feel like even in this age of Amazon.com and CDNow we’re filling a niche because it’s hard to get that product from those people. Even though they list it, it’s hard to get.”

Tafuri says he is hoping to add a tour support component to do bookings and line up tours for artists on the label. And he may introduce another imprint in the near future. “I’m kicking around the idea of starting a second label that might be more ‘out,’ he says. “But in general I really want to put music out there that’s listenable, that’s viable, that can support these artists that are out there working. I’m not interested in doing one-offs. I really want working musicians and I want people that are hustling as hard to get their music out there as I am.”