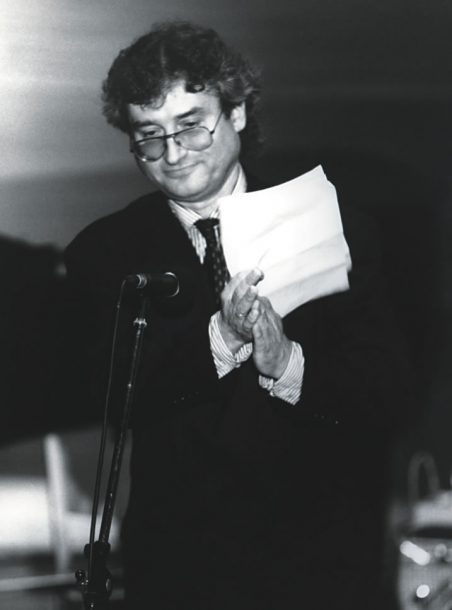 Like many other enterprises that just sort of come into being, Nagel-Heyer Records, of Hamburg, Germany, was never planned. The label’s gestation actually came about as a serendipitous byproduct of a commercial jazz radio station that had trouble making ends meet.

Its co-owner, Sabine Nagel-Heyer, was running the station-which played jazz 24 hours a day, featuring mainstream, good Dixieland, and, for the kids after school, two hours of modern jazz. Her duties evolved to include every aspect of station life, including programming, guests, marketing, paying bills, and whatever else needed to be done.

Being a commercial jazz radio station, however, made some of its shareholders wary of the growing amounts of red ink, with some dropping out after just nine months of programming.

But Nagel-Heyer was determined to persevere, and things began moving in a different direction after she and her husband, Hans, traveled to Bremen to hear a jazz group, featuring George Masso on trombone, clarinetist Kenny Davern, Randy Sandke on trumpet, Danny Moss on tenor, pianist Eddie Higgins, British bassist Len Skeat, and Jake Hanna on drums.

The promoter of the Bremen concert convinced the Nagel-Heyers to book this group at the Musikhalle in Hamburg, on George Gershwin’s birthday, September 26, 1992. Taking the suggestion of a friend, the concert, The Wonderful World of George Gershwin, was recorded solely as a souvenir of the occasion.

The concert, said Nagel-Heyer, was a wonderful success, and she proceeded to play that souvenir recording on her station, much to the delight of listeners, who called in surprising numbers asking where the CD could be purchased. That concert and subsequent recording proved to be the launch of the Nagel-Heyer label.

The final straw for the radio enterprise was when the German government threatened to revoke the station’s license. As a survival measure, the station’s format was changed to include jazz only one evening per week, and a new crop of owners came on the scene.

“This almost broke my heart” said Nagel-Heyer, “because the station was like a child to me. But now I was able to put all my energies into the new recording and concert projects.”

Live recordings of concerts in Hamburg continued in 1993 with seven releases, including those at a new stage, the Amerika Haus, and 1994 saw the label putting on a concert every month.

More than 70 titles have been released or are ready for release at this time, and the label’s mission is to present music much in the same vein as Nagel-Heyer’s radio station did-plenty of mainstream, swing, and very good Dixieland.

“We pride ourselves on both the music and audio fidelity of our recordings,” said Nagel-Heyer, “and some reviewers contend that our work, especially in the field of live recording, is on par with the best ever done. We record on 24 tracks, and the equipment is very expensive and heavy. It’s also expensive to buy the tapes, as are noise reduction systems and shipping costs. But we do it because we have a chance during the mixing process to correct anything we want.”

Nagel-Heyer has introduced a new line of recordings-Nagel-Heyer 2000 series-leading off with trombonist Wycliffe Gordon’s Slidin’ Home, which the label expects to become a top seller, and trumpeter Byron Stripling’s release, Stripling Now!, which is also getting strong radio promotion. The recording that currently holds the record for best sales is a 1993 release by the Harry Allen Quartet, Jazz at the Amerika Haus, with Allen on tenor, John Bunch on piano, Dennis Irwin on bass, and drummer Duffy Jackson.

Nagel-Heyer, distributed by Allegro in the U.S.A., enjoys good sales here, as well as in England and Japan. Hans and Sabine plan to establish their own distribution network in Germany to solve recurring headaches in their own country, and their son now operates a music publishing company.

No matter who the label records-whether young or old, novice or master-there has always been one overriding principle: the music has to swing. “It don’t mean a thing if ain’t got that swing,” said Nagel-Heyer with a smile. “That’s our constant demand.”