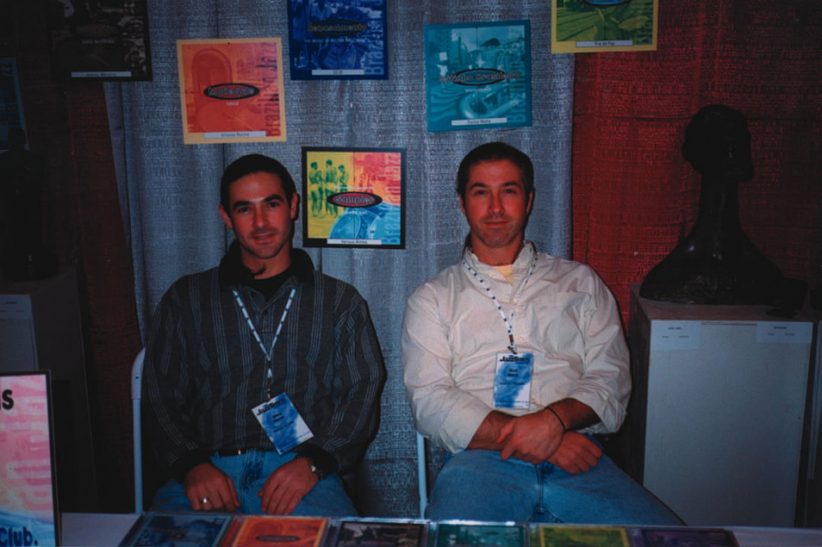 L to R: Mike and Rick Warm of Malandro Records

Malandro Records president Rick Warm has found a cozy niche in Brazilian jazz, the seeds of which began in 1990 while he was in Brazil doing a college internship in international business. During those nine months, Warm pursued Brazilian music in his leisure time and learned to fluently speak the Portuguese language.

“I met Rick [Udler, the first musician Warm recorded] and, although I liked the music before then I didn’t know much about it,” says Warm. “I started getting really heavily into the music and returned every subsequent year to hang out with friends and get my music fix for the year.”A pianist-guitarist enamored of Brazilian music and jazz since he was a teenager who first heard Milton Nascimento and other artists on Cincinnati radio stations, Warm was impressed by these gifted musicians who were struggling to get recorded in Brazil. Eventually, he consolidated his business expertise with his passion for music and started his own company.

“It took a dedicated leap of faith in a lot of ways,” says Warm. He had saved some money before he quit his regular job in 1996 to focus on Malandro Records and his umbrella company, World Bop, which encompasses educational and musician booking activities.

The label name comes from 1930s-1940s Brazilian folklore about the mythical “malandro.” A scurrilous shyster and a ladies man garbed in white silk suit and hat, he probably best compares to his American cousin, the gambler and womanizer, Sportin’ Life, a character from Gershwin’s folk opera, Porgy and Bess.

In 1996, Warm released his first recording project, Rhythm & Romance featuring guitarist Rick Udler and singer Maria Alvim. Warm initially used the CD as a calling card to attract other Brazilian musicians to his label, then re-released the album in April 1998. By then, Warm had weathered startup problems, developed a solid business plan, and designed a packaging concept that uses historic 1940s photos of Brazil made by Genevieve Naylor. He secured distribution by piggybacking with an established label.

Other 1998 releases feature guitarists Ulisses Rocha and Juarez Moreira, saxophonist Carlos Malta, and the modern groups Trio da Paz, and UZ 22. Four CDs are due out in the first quarter of 1999, including sessions by Paulinho Nogueira (cited by his contemporaries as one of the most important guitarists in Brazil but little known outside his country), and the straightahead group Terra Brasil, the chorinho band Aqua de Moringa, and the contemporary jazz group, Café Jam.

Although long influential in modern American music, Brazilian jazz seems to be enjoying a surge in popularity and, lumped into the world music category, has been attracting new listeners. Malandro Records is the only American label focusing on Brazilian jazz, from samba, bossa nova, and chorinho to MPB (Brazilian popular music). Once you hear the Malandro recordings, you’ll agree that Warm rides the crest of this wave with his growing stable of talented instrumentalists.

If Malandro Records can do for Brazilian jazz musicians what 1950s recordings did for Astrud Gilberto, Antonio Carlos Jobim, and others, Warm will have achieved success. He plans to annually release about 10-15 albums and to develop educational programs about Brazilian jazz. His dedication to cultivating fans is evident in fully informative liner notes by Mark Holston, Oscar Castro-Neves, Gene Lees, Charlie Byrd, Herbie Mann, Lee Jeske and others. For more information, visit Malandro Records at www.brazilianjazz.com.