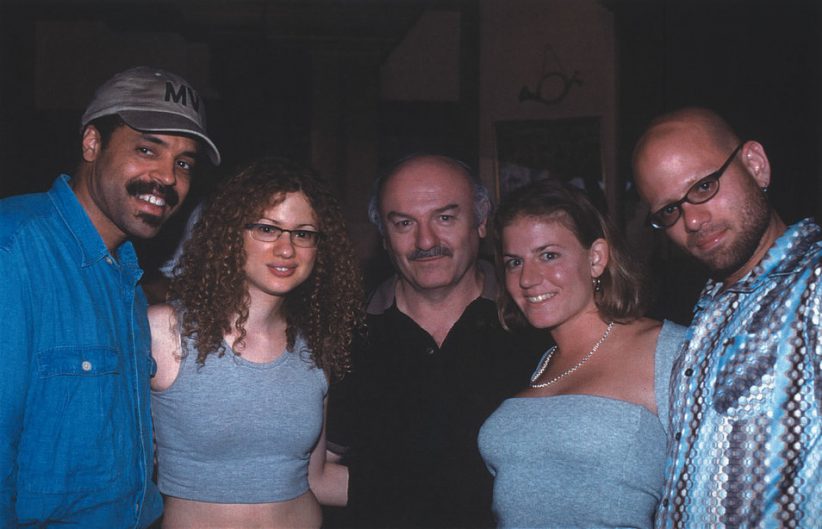 Visiting Martians, and/or other beings just becoming aware of the jazz world, might well become confused over the identities surrounding the phrase “blue note.”

In one corner, we have the esteemed and venerable Blue Note Records. In another corner, there is the Blue Note, the well-known and loved Manhattan jazz club which has franchised itself into “out of town” locations, with three clubs in Japan and with clubs slated to open in Las Vegas and San Francisco. Or catch them on the Internet (www.bluenote.net), where you can get info, order CDs, or hear live broadcasts on Mondays and Thursdays.

And, as of this year, there is the label known as Half Note, an in-house enterprise out of Blue Note (the club), with no affiliation with Blue Note, the label. Got it?

Other clubs have launched their own labels, i.e., the House of Blues, and Antone’s in Austin, Texas, with varying success, and with varying symbiosis with the host organism. In the case of Half Note, which has released its first batch of ten titles this year, the concept is very much woven into the fabric of the Blue Note (the club).

It hasn’t hurt that other high-profile live albums have been recorded here, including the epic sprawl of 6-CD sets by both Keith Jarrett and Chick Corea in the past few years. The live spirit, in a club small enough to be called intimate, is retained in many of the releases in the Live at the Blue Note series, which eschew fade-outs and celebrate the live ambiance. From a marketing standpoint, the very “you are there” aspect doubles back in support of the club itself-the “there” aspect.

The force behind getting the label rolling is general manager and record producer Jack Kreisberg, who took the reins after several earlier attempts at launching a club-linked label fizzled. Kreisberg, who has been involved with various labels, including Buddha, Arista and CTI over the past 30 years, proposed structuring a label around a pressing and distribution deal.

They settled with Platinum Entertainment, which also handles another club-oriented label, House of Blues. As Kreisberg comments, “One good thing about going with them is that they didn’t have a jazz label, so we became their jazz component.”

The decision was also made that recordings could be made without having to invest in a studio, using the built-in attributes of the room. “Rather than creating a studio,” he says, “we decided to find a good crew and bring them in as we need them, to do remote recordings.”

In terms of the A&R, much of it was negotiated through the machinery of the club itself, which the musicians could use as a workshop, a proving grounds, and, finally, a recording venue. Kreisberg explains that “we make one-off deals with these guys. I don’t want to interfere in their careers. We want to enhance their careers. If a major label does become interested in one of these guys, it will be beneficial to us, because, first of all, I don’t think any label would object to an artist having a good relationship with a club. Everybody’s dying to play in here, anyway. So that’s a plus for a young musician.

“We could have spent more money and made a big splash in coming out, instead of taking on a bunch of young musicians. But they’re very talented. When you listen to the music, it’s happening. We chose to document these guys. Years ago, when Fantasy and Riverside were making records, basically, Monk and Wes and Miles were just the guys. They went in, they did the dates, and they left. Forty years later, now they’re icons. But at that time, they were just the guys.

“It was history in the making, but to them, it was just, ‘Hey, I got a date. I got 75 bucks.’ Nobody was sitting around analyzing it. They didn’t go and lecture in the colleges about what he was thinking when he laid down a certain track. You have to keep that spirit alive. From that point of view, the majors, unfortunately, are looking to sell a lot of product-which I understand, because it is a business, after all.”

Being young and on the rise doesn’t negate the importance of quality: if anything, Kreisberg feels it necessary to be more highly selective in what the label records. “The music has to speak for itself. When I put these things together, although I’m not that much involved in picking out material, they understand that we’re trying to be ambassadors of jazz. I’m not trying to make a musical statement, to see how far we can push the envelope. We want to introduce jazz to people who can listen to it and enjoy it and not be irritated by guys who want to squeeze as many notes as possible into a framework.

“When we put those things together, I let them do their own thing, but we talk about it ahead of time. I say, ‘Listen, this is basically a straightahead room.'”

Smaller independent labels, which have been an important aspect of jazz’s development from the very beginning, continue to have an impact on the music. New indies tend to be fueled by idealistic visions, but face obvious hurdles, in the areas of distribution and also the lack of that other backbone of the jazz record industry-the vaults.

“The problem that the smaller labels have is that they don’t have the big bucks and they don’t have the back catalogue to finance advertising. With companies like Blue Note or Fantasy has a huge jazz catalogue, or even Concord for that matter, or Universal, with GRP and Verve put together, the bulk of their catalogue sales are the old classics and the standards.”

As Kreisberg reasons, “it would be nice to do all the superstars, to say, ‘OK, we’ve got Elvin Jones live here at the Blue Note,’ but, in a way, to me, the real heroes are the unsung heroes. They are the musicians who are in the business, doing the day in and day out performing, and keeping it all going. They’re in the trenches, no matter what. So it’s nice to document those guys.

“Our goal is basically to build a great catalogue. Hopefully, over the course of time, some of these guys will move over and become forces in jazz. Some of them will make their mark. Also, because the club is growing as well, it’s a natural progression.”