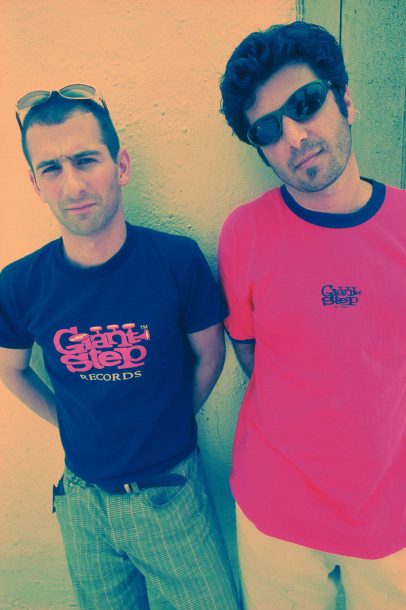 For better and for worse, we seem to be in the middle of a jazz boom. The better: a plethora of labels major and independent, a surplus of first-class, multi-disciplined musicians, expanding markets (cable/online). The worse: stylistic sameness, label conservatism, genre narrowness. With everybody goin’ for that niche demo, things just ain’t what they used to be like back in the Impulse-Atlantic-Prestige day.

Maurice Bernstein, head of N.Y.C.-based Giant Step records and his partner-in-vibe Jonathan Rudnick (he runs Groove Academy, the label’s club promotions/concert events wing) are students of the Old School-they’re about the music first. When the two expatriates (Bernstein is from the UK, Rudnick is from South Africa) joined forces in 1990, they were just music lovers who wanted to give something back to the creators. “Groove Academy was the mothership that started it all out to garner respect for funk and funk attitudes,” recalls Rudnick. “The stars of the ’70s, although they were highly sampled, were not getting the recognition, (they) weren’t being presented in a live forum. So, we started off with Maceo (Parker), Bootsy, George Clinton, the Ohio Players and that was the Groove Academy…the kind of school-of-the-streets idea. Out of that sprang the jazz-oriented street wing, Giant Step. Giant Step being a moveable club environment and then just sort of an environment in general wherever it lands. We wanted to create a like-minded network not just in America, but around the world.”

Over the next five years, Groove Academy’s efforts would spark the nationwide funk revival, but the Giant Step concept would rock the world. Giant Step’s revolutionary ambience of beats, jazz mixes, live MCs, jamming musicians and hip dancers soon became the epicenter, paradigm and catalyst for the nascent acid jazz culture that was emerging in the UK, Japan, Europe and major US cities. As Giant Step grew into a DJ/clubber’s paradise, it also became the laboratory for a new generation of jazzy babies that includes DJ Smash, Dana Bryant, Repercussions, Groove Collective, Brooklyn Funk Essentials, Digable Planets, Guru’s Jazzmatazz and Buckshot LeFonque. These artists and their overseas counterparts (Incognito, Galliano, U.F.O.) weren’t acid jazz-they were the New Thing, ’90s style.

As the scene began to blow up, Giant Step created a management wing. Signing on Dana Bryant, Repercussions and Groove Collective, Bernstein and Rudnick secured all three record deals with Warner Brothers. Unfortunately, all of the releases got lost in marketing black holes and internal politics. Sadder but wiser, the duo cut their losses and moved on. “Warners was a training ground,” says Bernstein. “We saw how a record gets done from A to B-how you make the record, market the record, promote the record, etc., etc., etc. We also saw that as management it’s really difficult to get things done unless you have a platinum act. Then Tommy (LiPuma) approached us and said, ‘Why don’t you set up a label within GRP?’ we said, OK-let’s do it.” The first release under the new imprint was the second Groove Collective album, ’96’s We The People.

In early ’97, Giant Step lived up to its name by undertaking its most ambitious gambit yet: the Nuyorican Soul project. The brainchild of legendary Latin house DJs/remixers “Little” Louie Vega and Kenny “Dope” Gonzales (Masters At Work), Nuyorican Soul is a throwback to all those ’70s Quincy Jones-esque allstar jazz ‘n groove pastiches. Boasting a posse that includes George Benson, Tito Puente, Roy Ayers, house diva Jocelyn Brown and new salsa queen India, Nuyorican Soul’s music is a masterful blend of clubland joi de vivre, jazzy chops and phat, phunky grooves. To date, three singles (“Runaway,” “You Can Do It (Baby)” and “I Am The Black Gold Of The Sun”) have made it to the top of the Billboard charts, the album has sold over 100,000 units. According to Bernstein, it’s still about “taking care of your fan base first. It’s very important to educate people about a project, create a buzz at retail-never ignore your sales base. Don’t overdo things, but really work at the heart of where it is, where people want to buy your record. From there you start working radio and the broader media, and you need to have juice at pop.” Future projects slated for next year include a Giant Steps Vol. II (remix album with tracks by Benson, Danilo Perez, Nuyorican Soul, as well as some drum ‘n bass), a new Groove Collective and Nuyorican Soul Vol. II.