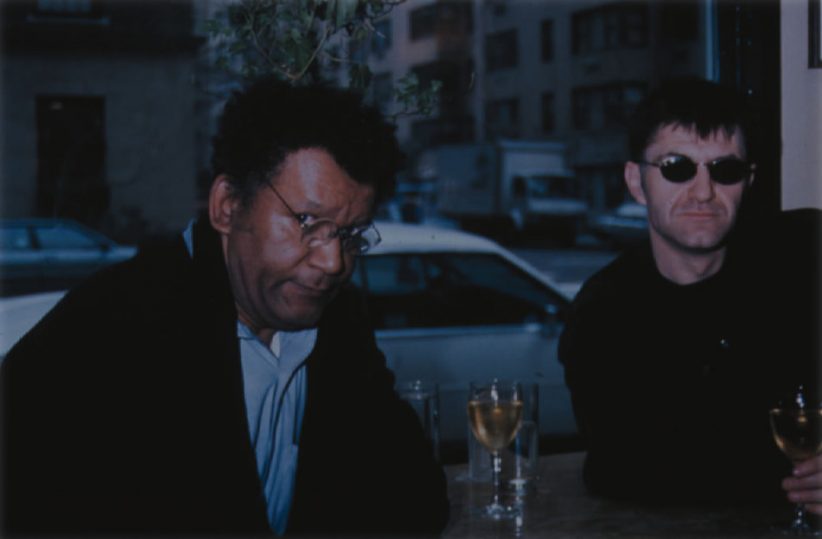 Anthony Braxton is one of the most prolifically recorded composer/improvisers of our time, annually adding upwards of a dozen titles to an already massive discography. In 1996 alone, discs of Braxton’s music were issued by seven different labels. Still, Braxton feels his far-ranging activities are being documented in a piece-meal fashion. For years, Braxton pursued a strategy by which the release of a solo or quartet album with a particular label would facilitate the release of notated works, or music for unusually configured ensembles.

Yet, the volume and rapidly growing scope of Braxton’s projects have outpaced the production schedules of even ardently supportive labels.

Paradoxically, as more facets of Braxton’s music become available on disc, there are widening gaps in his discography.

This prompted Braxton to recently form his own label, Braxton House, in association with Velibor Pedevsky. With typical damn-the-torpedoes Braxtonian zeal, the North Country-distributed label was inaugurated with not one, two, or even three new CDs, but four albums, including a double CD. In a single release, Braxton House has not only fleshed out the evolution of his orchestra music with a first recording of 1982’s Composition No.102 (For Orchestra and Puppet Theater) (BH-003), and updated his groundbreaking music for solo alto saxophone with Solo (Skopje) 1995 (BH-002), but has also issued the first examples of Braxton’s Ghost Trance Musics (GTM).

The two-disc Sextet (Istanbul) 1996 (BH-001) and Tentet (New York) 1996 (BH-004) comprise a compelling case in point for Braxton’s need to establish his own label. Generally, GTM compositions require CD-length performances for Braxton’s intricate dialectic between notated and improvised materials to run its course. The GTM also has enormous structural flexibility, as evidenced by the respective performances by Braxton’s Sextet (with violinist Jason Hwang, trombonist Roland Dahinden, accordionist Ted Reichman, bassist Joe Fonda and percussionist Kevin Norton) and the Tentet featured at last year’s What is Jazz? festival (the Sextet, sans Hwang, is featured on the latter disc, as are violinists Gwen Laster and Jacque Carrasco, and woodwind players J.D. Parran, Brandon Evans and Andre Vida). On the basis of these discs alone, it’s obvious that the GTM is a major, rapidly evolving aspect of Braxton’s work; parced out to various labels, it could easily take two years before even this initial batch of GTM works reach the market.

Compare that production schedule scenario to Braxton House’s plans for the remainder of 1997. By summer, three more volumes of GTM will be available: Quartet (Wesleyan) 1995 (BH-005); Octet (New York) 1995 (BH-006); and Ensemble (New York) 1995. Next in the pipeline is a ten-CD set recorded at the Ghost Trance Festival presented early this year at the Knitting Factory.

But even Braxton can’t do everything at once-it may be next year before last year’s Braxton-financed performance of the composer’s opera, Trillium R, is released.

In addition to vigorous catalog building, Braxton House is also committed to keeping its titles in print. For Braxton, an album going out of print is the ultimate loss of artistic control. This is an especially prickly issue for Braxton, given his long history of underwriting his most adventurous projects, beginning with the notorious Composition 82 for four orchestras. Issued almost 20 years ago as a three-LP Arista box set, Composition 82 was almost immediately consigned to oblivion, despite being critically hailed as an important nexus between post-Coleman jazz and post-serial composition. In large measure, Braxton House’s mission is to prevent a similar scenario with current and future works.

“My decision to create Braxton House stems from the approach of the third millennium and the lessons I’ve learned during the past 20 years with all the labels I’ve dealt with,” Braxton said in a recent phone conversation. “Unlike many artists who have become successful with major jazz companies, my career has been a most unique experience. I have had periods of real assistance, and allies who have helped my music to reach people. And I have had enemies. Braxton House is a solidification of these experiences.

“I have financially backed all of the recordings I have done in the last ten years or so, anyway. I am grateful to the people who helped me document my music, and I will always be grateful to them, but the solidification of Braxton House will give me a chance to build upon what Sun Ra understood, what Charles Mingus understood, what Scott Joplin understood-at some point you have to build your own platform.

“Opera is now an important part of my work, and it is an aspect of my work that I can only document with Braxton House. We have excellent master DATs of an excellent performance of Trillium R. Unlike Scott Joplin, who only heard a dress rehearsal of Treemonisha, and who eventually went crazy dealing with the debts and the stress of advancing his work, I am surviving the complex experience of Trillium R’s performance. Braxton House will be a company that will always value it. I went broke and put my family through six years of stress to document the piece for four orchestras-Composition 82-and now it’s totally unavailable for young students to ignore.” Laughing, Braxton adds, “Trillium R will be something that generations into the future will be able to ignore. If I’m going to lose money, then let me lose money on something I own.”

Pedevski’s management-oriented analysis of Braxton’s career is the basis of a contrasting, unabashedly optimistic financial forecast for Braxton House. “Many people have made money on Braxton’s music,” said Pedevski in a separate telephone conversation. “You don’t keep releasing records like he does if someone isn’t making money. Braxton House will make money, and I’m sure Braxton will use it to produce more projects. But the real challenge for Braxton House will not be selling CDs to the same people who buy every Braxton disc, but to reach a new, younger audience. They are looking for really meaningful music, the kind of profound statement Braxton makes with his music. We’ll do it, I’m sure.”