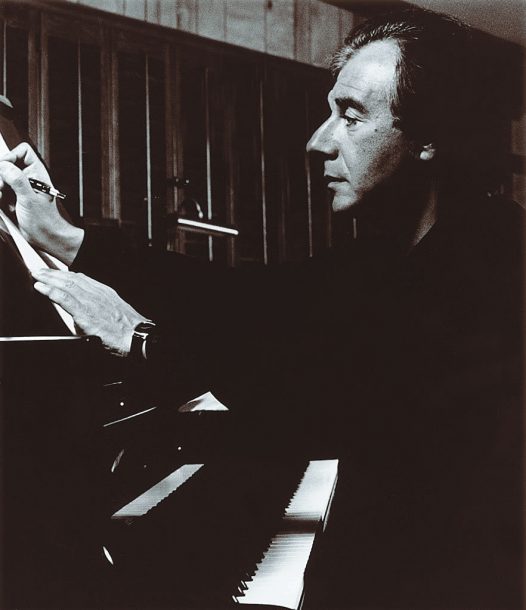 Artist-run record labels, an important footnote in jazz history, are a seductive, dangerous business, often destined to fly, fail, or both. The problems encountered usually revert back to the truism that musicians aren’t always business people by nature, and the fact that the record distribution machinery can be an ornery beast. But, in the late ’90s, there’s a new, hopeful aspect to the entrepreneurial equation: the internet. One artist who has plunged into this new, flexible realm of marketing is veteran pianist-composer Lalo Schifrin, who has launched Aleph Records, on the web (www.alephrecords.com). Schifrin, who started the label this year and already has several releases on the roster, asserted that “the technology has offered us an opportunity and we should take it.”

The label’s first releases trace Schifrin’s own legendary root systems. The big band suite called “Gillespiana,” recorded with the WDR big band in Cologne recently, was written in 1960, soon after Dizzy Gillespie first invited the Argentinian Schifrin to the United States. At the time, he was a young prodigy who had studied classical music in Paris, while simultaneously honing his considerable jazz chops. Another new release is called Film Classics, featuring Schifrin’s arrangements of classic film themes. Schifrin’s own extensive film and television scoring career includes the signature Mission: Impossible theme and Bullitt.

“The main reason for starting the label was that I have many different aspects to my musical activities. They can be divided into three main streams, let’s say. One is jazz, which is the reason I came to this country, like a Muslim coming to Mecca. The other is classical music, which I grew up with and studied. I got a scholarship when I was a teenager to the Paris Conservatory. I was living a double life then, going to the conservatory and playing jazz at night. And then, film and television music is the other thing I’ve done a lot of.

“There is no record company that can handle me. Maybe my versatility, which should be a blessing, is a curse, because they don’t know how to categorize me. Unfortunately, the corporations have to name things. If you don’t fit into their ideas, maybe you’re too eccentric.”

One planned release is Schifrin’s “Jazz Mass,” which won a Grammy in 1966, in a new recording with the WDR big band and Tom Scott as soloist. Schifrin will also put out the original soundtracks he wrote for the Dirty Harry films, Dirty Harry, Magnum Force, and Sudden Impact. From another cultural corner, he will also release an album of Jazz Meets the Symphony #4, with the London Symphony Orchestra, an extension of his older, Grammy-winning Jazz Meets the Symphony #3.

There will also be a new recording of a recent solo piano concert. “It was the first time I made such an attempt,” says Schifrin, who has been focusing more on his own music, outside of Hollywood, in recent years. “It was in a castle where they have people like Chick Corea and Keith Jarrett and Friedrich Gulda, the crossover pianists-and of course Oscar Peterson, who doesn’t really need an invitation. I tried it in secret and prepared a repertoire. It was recorded and it came out good. I’m sure we’re going to release that.”

For the moment, the label is almost strictly focused on Schifrin’s own diverse range of musical work. He is also conducting on a recording project with the young Puerto Rican tenor Cesar Hernandez-“I think he’s going to be one of the superstars in the near future. I did an album with him and the London Symphony of opera arias,” Schifrin said. “I’m not going to sign other artists yet, because I respect them. If I can, I will. But I don’t want to become a tycoon. I want to put out good music, to do a good job not only with recording, but also with marketing and distribution-that part is my wife’s job.”