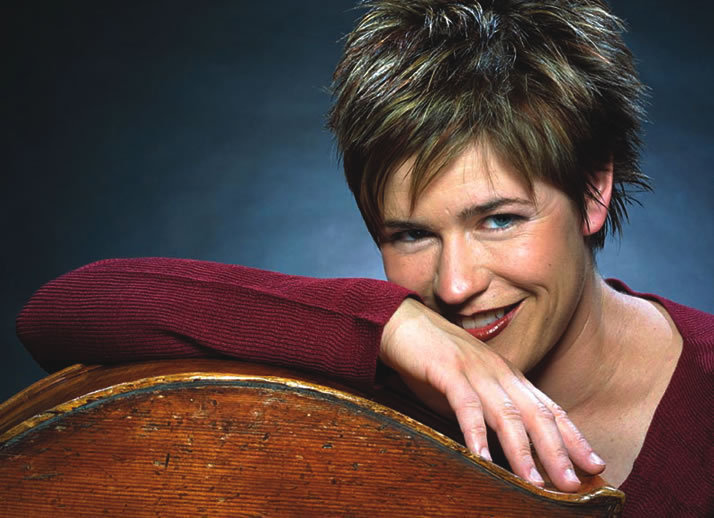 Sixteen bars into a rehearsal of Thad Jones’ “To You,” Kristin Korb stopped Central Washington University’s top jazz band and laid down a guideline that might serve as her credo: “Twice the intensity, half the volume.” The 21-piece band’s next try earned a smile that lingered as Korb counted off Joe LaBarbera’s “Message From Art.”

Later, she tells me that in her second year as CWU’s director of jazz studies she and the band are more comfortable with each other. “They were a little leery when the ‘chick singer’ took over,” she says. There is no mistaking her quotation marks around “chick singer.” In any conversation about her work, Korb makes it clear that her job description of choice is “bass player,” a claim supported by Where You’ll Find Me, her new CD on Double K Music. Her sidemen are pianist Mike Wofford and drummer Jeff Hamilton.

Among top-flight bassists who sing while they play, Korb is in an exclusive category with Jim Ferguson and Jay Leonhart. A protégé of Ray Brown, she sang but did not play on her 1996 debut CD on Telarc, Introducing Kristin Korb With the Ray Brown Trio. “With Ray Brown,” she asks, “what would any sane bassist do?” She followed up her master’s degree in bass performance from the University of California San Diego with lessons not only from Brown but also from John Clayton, Ron Carter and Rufus Reid. She polished her singing in studies with vocalist Sue Raney, the most sought-after jazz and popular singing coach in Los Angeles. Korb’s work reflects their teaching and examples-solid swing down the middle, informed note choices in time-keeping and in bass solos, clarity of intonation, flexibility of line and literate interpretation of lyrics in her singing.

On Where You’ll Find Me, she plays the melody of “The Man I Love” so perfectly in tune and unison with Wofford that they sound like one instrument. Her solos on that piece and her own “Mac” leave no doubt about her bass capabilities. In line with her credo, Korb’s singing has both intensity and subtlety. Among the highlights are her vocalese solo in unison with Wofford on “How About You,” her incisive and spirited delivery of seven choruses of her lyrics fitted to Jimmy Heath’s tenor sax solo on “My Gingerbread Boy” and a wistful “Darn That Dream.”

Versatility, musicianship and infectious enthusiasm for performing and teaching put Korb in position for a solid career.