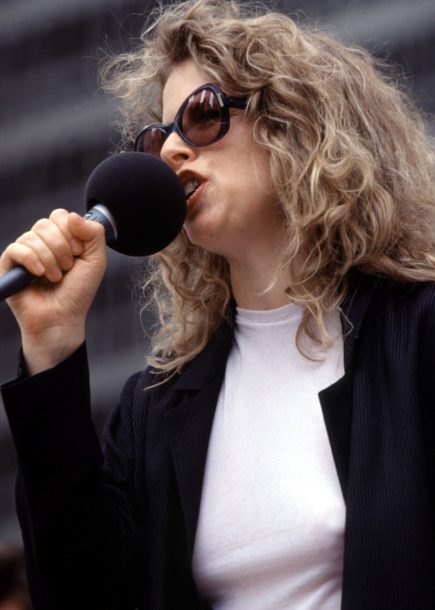 After spending the ’70s firmly entrenched in the avant garde before crossing over to the pop camp in the ’80s, vocalist-keyboardist-composer Kitty Brazelton has successfully melded the two aesthetics with Dadadah. On the group’s second recording, Love Not Love Lust Not Lust (Buzz), Brazelton delivers her highly personal lyrics in an affecting, cathartic style against the backdrop of some intriguing arrangements for nonet. The music speaks of craft and discipline while also integrating plenty of outre improvisation into the mix by the likes of cellist Matt Turner, guitarist Hui Cox, harpist Elizabeth Panzer, trombonist Chris Washburne, French hornist Lydia Van Dreel and saxophonist (and Microscopic Septet founder) Phillip Johnston.

“The thing about this band is that there’s no keyboard,” says Brazelton, who grew up on rock before investigating more heady musical pursuits. “It keeps it open. It’s like doing aerial acrobatics.”

On the group’s debut recording five years ago, Rise Up! (Accurate), Brazelton took a more urgently avant approach. “I had been doing straight ahead pop all through the ’80s and was really reacting to it all. I used my voice like a banshee, which I’ve done less of on this album. This time I wanted to not shut out the pop experience but rather let it be there. And in a way it falls more into the cracks. The avant garde people tend to go, ‘Oh, it’s pop,’ while the pop people don’t know how to deal with it.”

Most of the songs on Love Not Love Lust Not Lust deal with the general theme of man-woman relationships. “They’re about all the things you get drawn into…the seduction, the back and forth exchange of power between the two people, that whole game.” The ambitious 20-minute suite that closes the album, “From Her Story,” is closer to home. “It’s about my daughter Rosie,” says Kitty. “Both musically and lyrically I’m really interested in having things come to a resolution, that there’s a happy ending. And with both records with Dadadah, Rosie is the happy ending.”