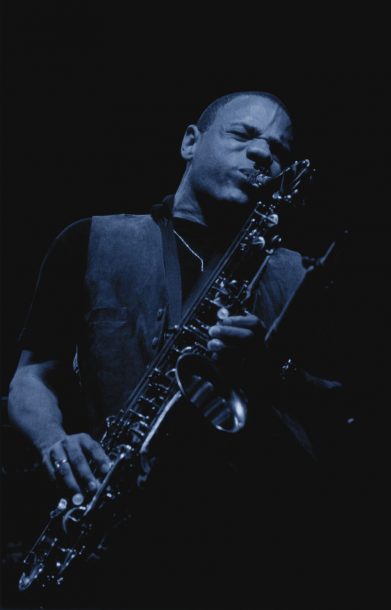 “The music industry represents a template of what should happen in society,” says the 39-year-old saxophonist-composer.

“Diversity is built into our industry. We operate and interact and intermarry as a natural course of events.”

“In a culture where the more exclusive the better, my album, Colors, celebrates the spirit of inclusivity and mutual respect. This project stands as a testimonial to the spirit of diversity and collective creative synergy,” he says.

Colors, Whalum’s sixth solo album and his first for Warner Bros., is a mixture of musical styles and influences. The ten tracks range from soulful gospel and romantic instrumentals to funk, pop, R&B, world music and smooth jazz.

“We celebrate the beauty of diversity through the artists and their cultures,” Whalum says, noting that Philippe Saisse is French, Justo Almario is from Colombia, Paul Jackson is from South-central L.A. and Abraham Laboriel is from Mexico.

“It was not contrived-each was chosen for musical ability, absolutely. But I took notice of it, and thought it would be great to shine a big spotlight on something that is wonderful and positive in our industry, that the world and specifically this country, could take a look at.”

The album’s title comes from a poem written last year by Whalum’s son, Kyle, when he was 12. It refers to people as “different colors of paint on the canvas of time,” and expresses the hope of erasing racial differences.

“We have had so many things that have moved us backwards,” says Whalum, “what with Rodney King and O.J. I’m hoping that this can be one of many things that will celebrate the good, not portray all the darkness that we live with every day, that’s blown up on gangsta rap music videos.

“I would rather celebrate the good part of life through music, and not get too heavy-handed or preachy. It’s important to just play the music and let it be the thing that prepares a person’s heart to be more open,” Whalum says of his desire to encourage reconciliation that goes beyond tolerance to genuine acceptance of racial, ethnic and national differences.

During the past decade, Whalum’s saxophones have sparked concerts and recordings by vocal luminaries such as Al Jarreau, Michael Franks, Take 6, Luther Vandross, Kevin Mahogany and Whitney Houston (that’s his sax solo on the megahit “I Will Always Love You”). He also worked with Quincy Jones, recorded with Bob James, including a Grammy-nominated duo album with James for Warner Bros., plus five solo albums for Columbia Records.

Whalum started performing as a boy, playing “Amazing Grace” with his father’s church choir. Growing up in Memphis, he heard gospel, blues and R&B. Early on, he knew he wanted to be a professional musician, forming his own R&B band in junior high and winning the school’s talent contest with a rendition of Cannonball Adderley’s “Mercy, Mercy, Mercy.”

He attended Texas Southern University on a music scholarship, also excelling in his minor, French. That earned him another scholarship for his sophomore year, paying the cost of living with a French family in Paris.

“I played in Paris as a street musician and got arrested once because I didn’t have a permit. The police took me to the station and looked through my case for drugs. There weren’t any, so they told me ‘Pas de trompette-No more trumpet.’ And I said, ‘Fine, I won’t play any more trumpet.’ Then I went someplace else to play.”

During his Paris sojourn, Whalum further honed his chops by performing regularly with a Brazilian band called Novos Tempos.

Returning to college, he organized a band that played original compositions around the Texas club circuit. After opening for Bob James in Houston one night, the pianist invited him to New York to be part of his album 12.

A contract with Columbia Records followed, bringing five solo albums, three produced by James. Last year, Whalum and James garnered a Grammy nomination for their 1996 duo album for Warner Bros., Joined at the Hip, leading to his own contract with the label.

“The Grammy nomination was such a surprise,” says Whalum. “There’s lots of things in life that light my fire, things I consider to be what I want to remember and brag about when I’m old, you know. A Grammy has never been something that was on the list. But I really did appreciate that nomination, the recognition.

“The day before yesterday, I spoke and played at a prison in Franklin, Tenn. That’s the kind of thing on the list.”

On the new album, Whalum wrote two compositions, collaborated on four with pianist-composer Saisse and on two others with keyboardist-producer Oji Pierce.

Whalum co-wrote the gospel-infused “All I Need” with Saisse, “a classical musician who has funk and gospel sensibilities. He was able to get into the gospel idiom and modernize it in a way that doesn’t bastardize it. In Europe, gospel and blues are art forms that they take seriously.”

Kirk and Philippe also co-wrote “Cannonesque” in the style of Cannonball Adderley, a spirit-filled “Open My Eyes” and the peaceful “Natchez” featuring guitarist Marc Antoine.

Says Whalum, “The beautiful trail that leads from Natchez, Mississippi, to Nashville literally dumps out less than a mile from my house. It’s the road I take when I’m not in a hurry. Chipmunks, deer and Tennessee’s own brand of scenery always bring a sense of perspective and peace to my mind when things get a little crazy.”

“Escolhido (Chosen)” is the album’s nod to Whalum’s love of Brazilian music. “I believe that heaven will be a place where all cultures and particularly all types of music will be celebrated and enjoyed. But if I could choose one genre of music for my mansion there, it would be Brazilian-hands down!”

Whalum says his favorite track probably is the closing one, “The Back Porch,” featuring guest vocalists Alison Krauss and Michael McDonald-humming, only humming.

The song was written by Tommy Simms, composer of the 1997 Song of the Year, “If I Could Change the World.” While Simms was working out the melody, he hummed it and played acoustic guitar, planning for it to be a vocal with sax segments.

“But I never could get his humming out of my head, so I finally convinced Tommy to let me try it with Alison and Michael humming along with me. It turned out to be what I consider one of the most unique, profoundly simple pieces I’ve ever heard,” Whalum says.

“Strength in You” was co-written by Whalum with Oji and saxophonist-bassist Gerald Albright, who guests on the track along with Whalum’s singing son, Kevin. “Gerald and I go way back and have many things in common besides the sax and stints with Whitney Houston-we both met our wives at age 15.” Whalum and his wife, Ruby, have been married 17 years and have four children.