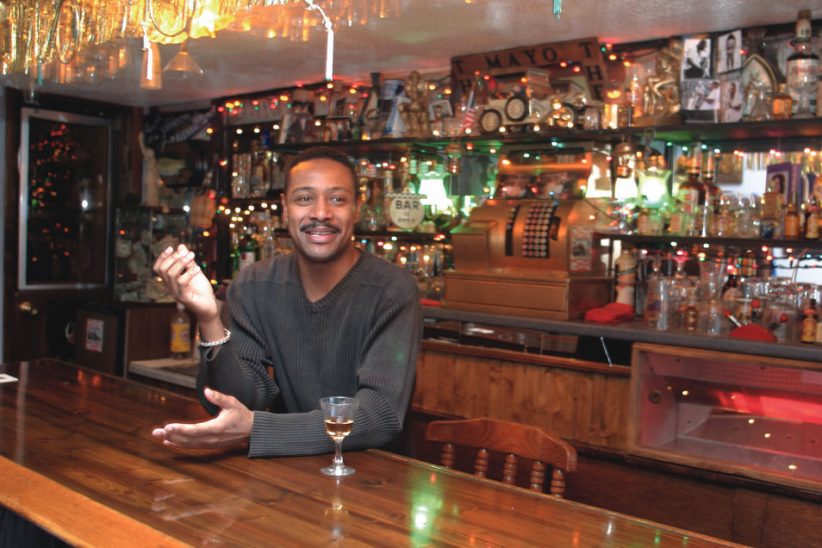 Kim Waters may look and sound like a city-slick loverman, but deep down he’s a country boy. Born in the small Maryland town of Havre de Grace, the saxophonist currently lives five minutes from there in the quaint town of Aberdeen with his wife, Penny, and his twin 13-year-old daughters, Kimberly and Kayla. As a child, Waters spent much of his life in the neighboring community of Churchfield with his parents, five brothers and two sisters. “Everyone is still in the area,” says the soft-spoken Waters. “Usually on Sundays, when everybody’s in town, we all get together.”

We’re sitting in Waters’ family room, which looks like a local watering hole, well-stocked with liquor and snacks, an elevated television, a slot machine and a jukebox. Adjacent to the tinsel and holiday-lights trimmed bar hang a few velveteen erotic paintings that wouldn’t look out of place in the 1973 blaxploitation flick The Mack. “This was actually a garage,” Waters says, surveying the room. “My father-in-law is a carpenter, and he suggested that we expand this space; so we knocked out the wall and built this bar. Everybody has a good time here, but the bar is strictly for family and friends.”

Given that Waters’ living quarters feature a full basketball court, a wood shop and a deck that holds 20 people, it comes to no surprise that this is where the family congregates for holidays. “This is actually the house my wife grew up in,” Waters says. “Once we moved in, we just kind of rearranged everything.”

All that space provides ample room for the Waters family to engage in some impromptu jam sessions. In addition to Kim’s brother James, who holds down the bass spot in his band, another brother, Eric, plays drums. With so much music running in their blood, it’s easy to assume that the kids inherited it directly from mom and dad. “My mother sang in the gospel choir at church, but she never took it seriously,” Waters says. “My father loved jazz and Barry White.” Along with the maestro of bedroom music, the Waters brothers really got heavily into David Sanborn and Grover Washington Jr., and they eventually formed their own band, Phase.

Waters initially started out on violin but later switched to, in his words, the “more manly” saxophone. An all-star basketball point guard at C. Milton Wright High School, Waters had several offers from major colleges to pursue sports, but he chose music instead. Before attending Hartford Community College, he studied with saxophonist Mickey Fields, who used to sneak a 16-year-old Kim into all the Baltimore-area jazz clubs. After only about a year and half of college, Waters went on the road with R&B saxophonist Byrd Pressley. “It was like a show band,” Waters says. “We were doing cabarets and casinos. We didn’t get a chance to do a lot of jazz.” Pressley’s band also featured Waters’ brothers and their childhood buddy, Cyrus Chestnut. “Cyrus played with us for about three years, before his first big gig with Jon Hendricks,” Waters says.

After playing with Pressley for a number of years, Waters retreated to his home and worked on a demo. With only a four-track recorder, a couple of keyboards and a microphone for the saxophone, he recorded four songs and sent out tapes to five record companies. Warlock (now N-Coded) dug the music, and the label re-leased his hugely successful 1989 debut, Sweet and Saxy. Channeling the sultry R&B and pop-jazz he heard during his youth, the disc established Waters as a suave melodist. Since then, he’s solidified his position as one of smooth jazz’s top players, and after a nine-year run at Warlock he joined up with Shanachie for a stream of popular discs including his newest effort, In the Name of Love.

When asked if he’ll ever leave the quiet countryside of Aberdeen for the big city lights of New York City or Los Angeles, Waters says he’s too laidback for city life. “If anything, I’ll buy a beach house out somewhere in Florida,” he says. “But this here is me–country.”

“The only time I’m into clothes is when I’m on stage. In the summertime, I’m usually in T-shirts and jeans.”

“I can’t say that I go to movies a lot, because DVDs come out so quickly. I try to buy all the DVDs that I can so that my daughters will have a stock when they get older. The most recent DVD I bought was Biggie and Tupac.”

“Dave Chappelle’s show. That guy’s a riot. Man, if he doesn’t win an award, then somebody’s crazy.”

“Basketball, this year, is a toss-up. It’s definitely not the L.A. Lakers. Sacramento and Dallas look good, but my team is always the Chicago Bulls.”

“I got the Macintosh G4 in my studio, which runs my whole recording system.”

“The last book I read was the Quincy Jones autobiography.”