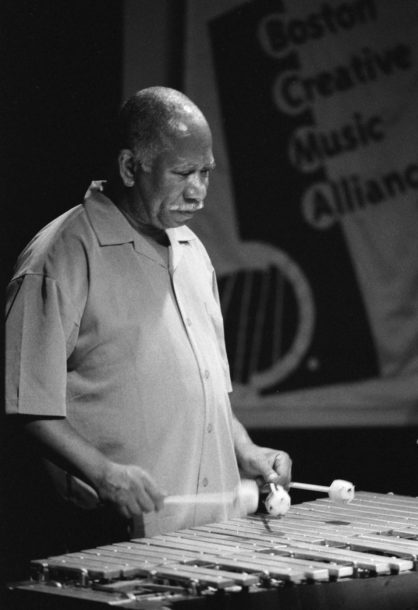 “A lot of times a guy will bring a piece and say, ‘Let’s play this Latin.’ And I’ll say, ‘Sorry, I’m not Latino, I’m African,'” says vibraphonist Khan Jamal. “‘So I’ll play it African for you.'”

That simple statement says so much about the 56-year-old, Philly-based Jamal. First of all, it says that even those who want to collaborate with the underappreciated player do not understand his style. More importantly, it clarifies the difference between Jamal and other vibraphonists; Jamal seeks to utilize the vibraphone based on its African origin, rather than its South American cooptation, the marimba. His polyrhythmic sound features a dark, intense vibrato that belies the cheerful tone commonly associated with vibes.

For more than 30 years, Jamal has been one of the most important and inventive purveyors of the vibraphone, lending his unique style to the music of Sunny Murray, Jemeel Moondoc, Ronald Shannon Jackson and Billy Bang, as well as playing with Philadelphia musicians such as guitarist Monnette Sudler and saxophonists Byard Lancaster and Odean Pope. While Jamal loves the music of Duke Ellington, Lionel Hampton and Jackie McLean, he first started earning recognition in the heady days of the New York City loft era. He began recording albums as a leader in the early ’80s with LPs on the Vintage, Steeplechase, Stash, Storyville and Gazell labels.

After staying under the radar for most of the ’90s, Jamal has upped his profile in the past few years: he’s performing more often; has released two discs on his own Jambrio label; and has recorded on albums lead by trumpeter Roy Campbell, saxophonist Moondoc, pianist Matthew Shipp and experimental hip-hop group Antipop Consortium.

During his relative quiet on the 1990s jazz scene, Jamal worked on furthering his style and adding another instrument to his arsenal: the balafon. Although Jamal had been aware of the African instrument for decades, it wasn’t until he attended a lecture and workshop at the University of Pennsylvania Museum of Archaeology and Anthropology that his interest was piqued. “When I first dug it, I said, ‘This is from home. This is the real deal,'” Jamal says. “The balafon is really the father of the vibraphone.”

Since then Jamal has studied the use and history of the balafon intensely. He now owns two balafons, one from Ghana and one from the Ivory Coast. Even though he has played the balafon for a few years now, only recently has he become comfortable to use the instrument in performance. “They are two different monsters,” Jamal says. “I find it helps to be able to play them both. Things you learn on the vibraphone you can initiate on the balafon and vice versa.”

On his new CD, Balafon Dance (CIMP), Jamal splits his time between vibes and balafon, his passionate style emphasizing the African rhythm connection between the two instruments. “I’ve always been rhythmical, and I’ve always been influenced by African rhythms,” Jamal says of the increased importance of rhythm in his compositions. Although Jamal is usually mentioned as a fantastic improviser, he proves himself to be an outstanding composer as well on Balafon Dance and his two recent Jambrio albums, 2000’s percussion-heavy Cubano Chant and 2002’s trio date Cool.

The rhythm section of drummer Dwight James and bassist Dylan Taylor join Jamal for Balafon Dance, and he reunites with the horn section of Moondoc and Campbell, with whom he recorded on Moondoc’s classic 1983 album Konstanze’s Delight (Soul Note) and 2001’s Revolt of the Negro Lawn Jockeys (Eremite). The quintet performs six Jamal compositions on Balafon Dance as well as stirring renditions of Gershwin’s “Summertime” and the spiritual “Nobody Know de Trouble I See.”

Taylor (who used to live in Jamal’s neighborhood) and James (who went to high school with Jamal in Philadelphia) are also Jamal’s longtime collaborators. “A lot of time I play with musicians, and they are not into the interaction,” Jamal says. “But [Taylor and James] can go any direction I want to go. They are open that way.”

A lot of other musicians are open to and appreciative of Jamal. When his recent revival was somewhat curtailed by a stroke he suffered in October, a long list of Philadelphia musicians, including Lancaster, members of the Sun Ra Arkestra, Sudler and Bobby Zankel, performed a benefit concert in December to help offset his medical bills and loss of income from his time off. Jamal, however, remains in high spirits and plans to return to performing in early 2003.