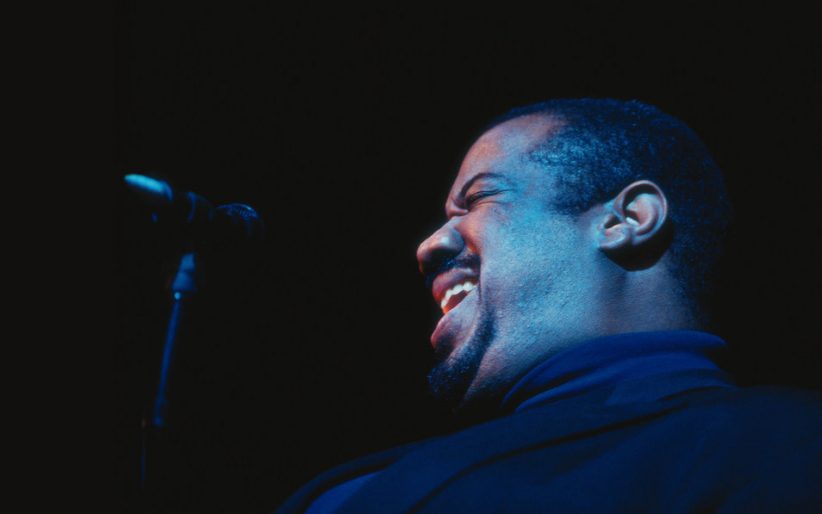 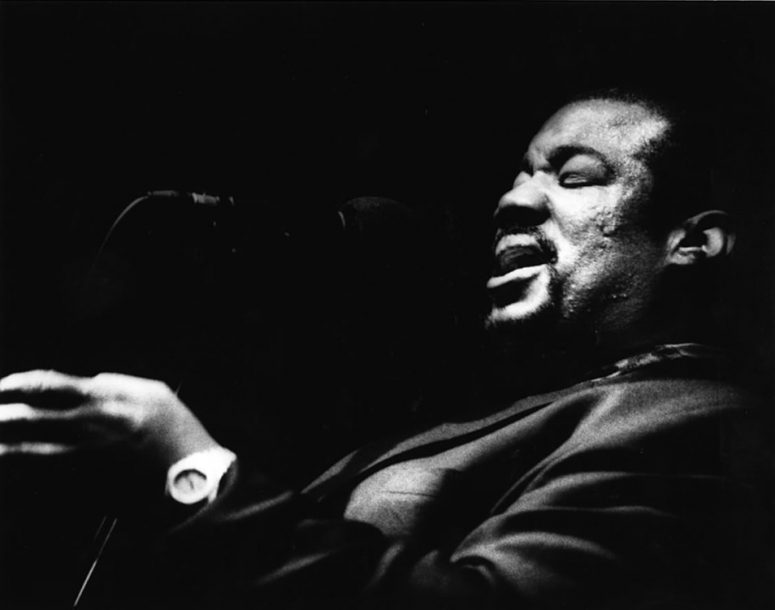 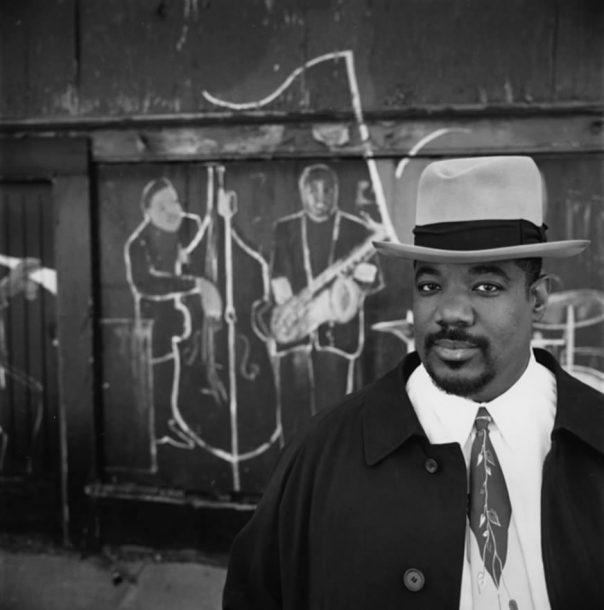 From the moment he grabs the mic and begins scatting like mad on the opening track of his latest Warner Bros. recording, Another Time Another Place, the joy of swinging and singing that comes from the big baritone voice of Kevin Mahogany speaks the truth. It speaks of a palpable exultation in the gift of music making he’s been amply blessed with; it speaks of the Kansas City blues tradition he has so capably inherited; it also speaks of dues paid and rewards being collected; and it speaks in a tongue that rejoices in the very maleness of his instrument and his capacity for song-males being a fairly rare breed in the vocal ranks of jazz, particularly paling by comparison to the rich cadre of female vocalists in the music.

Moving incrementally from piano to clarinet to saxophone and finally to his true calling, exercising those fine vocal cords he’s been blessed with, the Kansas City native took more than a minute to embark upon this particular journey of song. He sang in concert choirs and even formed a jazz choir during his undergrad days at diminutive Baker University, but not until he realized the limitations of big band saxophone jobs did he determine that his pipes just might be his fortune.

After a grad school stint he hit the want ads hard, pursuing bands seeking singers. “Initially I got picked up pretty quickly by a nine-piece horn band, doing all old Motown and ’70s soul,” the 39-year-old big man with the roomy voice recently explained.

Fortunately there were often jazz interludes in those sweet soul sets, bringing him back to his first love. That and the dearth of male jazz singers brought him back to the fold. “I realized that if I wanted to sing for a living it had to be either R&B or jazz, that was where you were generally accepted.”

His decision made, it wasn’t very long before he was attracting all the right attention. A gig in Chicago led to a chance encounter with vibist Gust William Tsillis, then the U.S. rep for Enja Records. “We talked about how there weren’t many male jazz vocalists, especially black male jazz vocalists, and [Tsillis] asked me to send him some stuff.” This led to a New York meeting with Enja major domo Matthias Winckelmann, whereby Mahogany successfully sold himself, scoring particularly with his contention that as a black male jazz singer from Kansas City steeped in that city’s storied blues tradition, the marketing hook was obvious. After three increasingly potent Enja records, Kevin hit the free agent market and Warner Bros. came up with the proper contract for the next step in his recorded legacy.

Another Time Another Place, his second for Warners, is a cogent progression from his label debut. Obviously there was a calculatedly different approach from his soulful and eponymously titled first. “I wanted to start making a Kevin Mahogany imprint,” he explained, “start being recognized for my material. You always identify certain songs with certain people, and we wanted to start doing that, as well as start creating our own voice musically. But we also couldn’t just go right to an album of all original material. I think people like to hear tunes that they know also. We’ve always been talking about creating new material that will always be associated with Kevin Mahogany, as opposed to ‘oh, he’s singing that Johnny Hartman tune,’ which I don’t mind; at the same time you want to be recognized for what you’re doing.”

Crediting guitarist Dave Stryker for invaluable assistance, Mahogany penned two new pieces for the album and shared a third with the plectrist. “I’m still not very theory-strong, so Dave definitely gave me some other ideas and helped me.”

Asked how his songwriting is proceeding, Kevin admits it’s a long-distance running approach. “Basically I’ve started with a form which I know, which is the blues, and I kind of write around that form right now. Hopefully I’ve developed a little bit better, but I’m still kind of writing around the blues form; meaning it might be blues changes but it’s not always a standard blues form. Like ‘Still Swinging,’ which is based on F-minor blues changes, but it’s not quite what you would consider a traditional blues because it’s got the swing feeling and kind of a hip hop feel to it. Same thing with ‘Fix It In The Mix,'” his humorous recounting of a recording session, “which was kind of written around a blues framework.”

Working on his writing is a constant off-the-bandstand pursuit; “just trying to write a little bit everyday, regardless of what it is,” he suggested. “It might not be a song, but just writing something to try and keep that creative side going; to the point that this summer I was in Europe and I didn’t have a keyboard that I could write material on, so I ended up writing a play!” So what comes first, the melody or the lyric? “There have been times when they’ve literally come together in a dream, as surreal as that may sound. I’m on an Elvin Jones album on Enja and I had been racking my brain to try and write some bop-type tune to put on that album. Literally it came to me in a dream and I woke up about two in the morning and sat down at the piano and started plunking away at it. Sometimes it’s just a matter of somebody saying something to me that will bring an idea to mind. When I was on a jazz cruise with Charles Earland, we were getting ready to leave and everybody was giving farewells and Pete Falco’s wife said, ‘We’ll save our goodbyes for tomorrow’—and that just hit me right there as a perfect title for a tune. Consequently, I wrote a little bit on it,” he revealed.

Quizzed on the tune selection process for Another Time Another Place, Mahogany pointed to a number of old favorites. “I wanted to do songs that I had been wanting to do for a long time, like ‘Wee Small Hours.’ ‘Cloudburst’ was another tune I had always wanted to do, if I could come up with another way of doing it that wouldn’t rip off Jon Hendricks,” one of the singer’s mentors, “not just redoing it exactly as he did it. ‘Goodbye Porkpie Hat’ is another tune that I’ve always dug.” Asked whether he stores tunes for future reference, he affirms that “a lot of people come up and make suggestions and most of the time I will at least put them down, and sometimes I’ll even check them out. You’ve gotta be open to all of it and at least give it a shot.”

Working with a core quartet of pianist Cyrus Chestnut, bassist Ben Wolfe, drummer Clarence Penn, and Stryker, Joe Lovano guests on three tracks and Kevin crossed genres to find a singing partner for “I Believe She Was Talkin’ to Me” in C&W star Randy Travis. On stage, one gets the impression that Mahogany is one of the cats, so what about the often edgy relationship between singers and instrumentalists? “I see it but it doesn’t bother me; that doesn’t mean I’m being callous. I’ve been on both sides of that, as an instrumentalist and a vocalist. What I see the instrumentalists saying is ‘if you’re going to be a vocalist you need to know what’s going on here [musically].’ When I do clinics they’re always asking me about scat singing, about jazz, about how to get respect on the bandstand…I always tell them if you want to get respect on the bandstand, you have to know what the instrumentalist knows, you need to study the same things he does. If you want to improve your scat singing, you want to study the harmonies and things he’s studying because that’s how he got his improv up.”

His philosophies on singing and the role of the singer in the band and other issues related to the singer’s art will be amply illustrated when Mahogany releases the first of his planned publications dedicated to the craft of jazz singing. Considering his very thoughtful and selfless manner, the publication is likely to be chock full of useful information for singers. “Instrumentalists already have clinics and magazines, not vocalists, so hopefully we can change that,” he concluded.