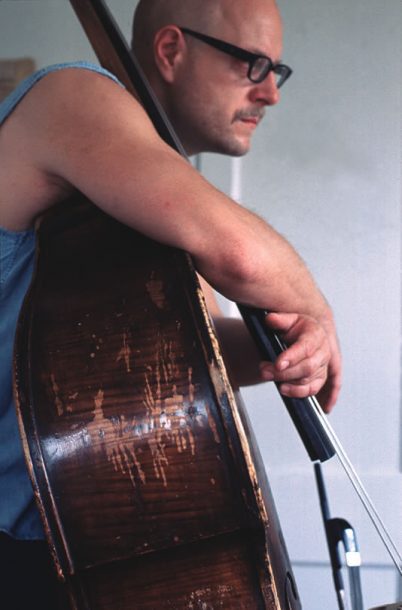 “Bull fiddle is what my grandpa called the bass,” Kent Kessler says, explaining the title of his mostly solo OkkaDisk CD, which, given his pivotal role in Chicago’s widely acclaimed creative music scene, has the jump on Overdue Debut Album of the Year honors. “He was a Kentucky Hoosier who moved to Indiana and called square dances and stuff. I have a real connection with roots music, so I wanted to convey that at some level this music is no different than hillbilly music.”

The bassist’s rural heritage is one reason he was influenced early on by Charlie Haden, a connection Kessler commemorates on “Out Of Iowa,” one of several contemplative, theme-driven pieces on the CD. Yet the bulk of Bull Fiddle is comprised of envelope-pushing music, particularly several tracks built upon riveting arco textures. These facets of Kessler’s playing complement his well-documented, high-voltage approach with groups like Hal Russell’s NRG Ensemble, DKV Trio and Vandermark 5 (whose Airports for Light is out now on Atavistic).

“There’s a whole side of the bass that you can only bring out when you play quietly,” Kessler says. “My interest in a more chamber music-oriented tone is not new. My first approaches to more outside and free music was much more from a contemporary classical position than jazz.” Referring to his early experimental music studies, Kessler confesses that in the late ’70s he was “a razor blade maniac, spending 12 hours a day splicing tape.”

It was then that Kessler met percussionist Michael Zerang, who plays dumbek on three tracks on Bull Fiddle to celebrate their 25 years of playing everything from free music to punk to R&B (the two team up with the fire-breathing front line of Peter Brötzmann and Joe McPhee on the forthcoming Hatology release Tales Out of Time). In addition to reinforcing his hard-core esprit de corps during his years of being ignored by Chicago media, Kessler credits Zerang for presenting ear-opening early Chicago gigs by European improvisers.

“A lot of the arco stuff I do was influenced by the continuous sound Evan Parker gets in his soprano solos,” Kessler says. “Then I heard the amazing streams of sound Peter Kowald created in his solos, and that kicked my butt. We all had our butts kicked then, when we were first getting it together. Chicago was a tough scene then, but you learned a lot in the process.”