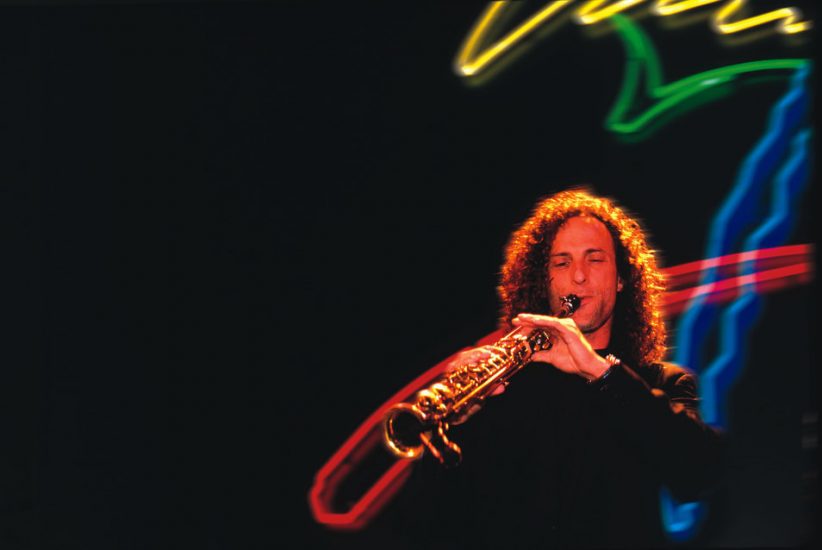 It may not be the end of the musical world as we know it, but it could come close.

After a 13-year run as pop’s top-selling instrumentalist, Smooth Jazz king Kenny G admits that even he has grown tired and frustrated with the increasingly rigid idiom that helped make him a superstar.

More startling still, the curly-haired saxophonist plans to turn away from Smooth Jazz for his next album, in favor of a style that should be his most controversial yet. Namely, real jazz, or at least his version of it.

“It’s nice when it happens on its own, but I think every artist has to reinvent themselves at some point. And I’m at that point now,” said G (real name: Kenneth Gorelick).

“So I’m going to do something different: an album of old songs, classic instrumental songs, like maybe a Louis Armstrong song, maybe a Stan Getz song-the legends. I might also do a Frank Sinatra song, maybe, but I haven’t done enough research. I was on the first Sinatra Duets album, and it was an honor. And George Benson and I are definitely going to do something together: we might do ‘Summertime.’ I have a feeling it will be an instrumental.

“I don’t know how it will turn out yet. But I want to do something that won’t sound like my other albums, yet have enough of my stuff that the people who like me won’t be met by something that sounds foreign. That’s the challenge: to change enough, but not too much.”

Will the Getz material G covers be taken from the late tenor saxophonist’s svelte bossa-nova period of the early 1960s?

“That’s the period,” he replied. “‘Girl from Ipanema’ has been done so many times. So if I do it, it has to be so innovative it will stand on its own. I have the right person in mind to do it with, a female [singer]. If they say yes, the whole album is finished.

“I’m trying to find the right songs and do them in a way that won’t compromise their integrity, while letting me be true to myself. That’s difficult. It’s almost like doing a Christmas album. You have to do certain songs. Then the question is: What kind of arrangements do you do? I’m not focusing on instrumentals; I’m focusing on anything that will work. And I don’t want it to be too ballad-oriented; it will also have a nice mix of up-tempo things.”

Part of the inspiration for G’s pending artistic transformation is his desire to expand. He wants to stretch out beyond the increasingly formulaic pop- and funk-tinged instrumental music that has earned him great fame and wealth, along with constant attacks from scores of jazz devotees.

His unexpected desire for artistic growth is matched by his growing dismay with the generic sound and pervasive timidity that characterize many of the performers, record companies, and radio stations that champion smooth jazz.

A pillar of both smooth jazz and new adult contemporary radio station formats for more than a decade, G is quick to emphasize how grateful he is for their continued support. But he is distressed by the number of sound-alike performers, including more than a few Kenny G clones, whose music gains airplay and record-company marketing support at the expense of original artists with distinctive sounds and styles.

“When I listen to the radio, which is only in the car, and hear smooth jazz, I can tell when someone is trying to do something to be commercial,” said G, who last year moved to Los Angeles from his native Seattle with his wife and young son.

“I can hear the players that are trying to do what I’m doing, [and] it doesn’t make me feel that great. I’m not that flattered when somebody tries to play like me, because they’re doing it to get on the radio. And I get depressed about radio stations that play this stuff. It’s like when you see a movie, and then another just like it; it can’t be as good [as the first].

“It’s like, to me, Sonny Stitt was a better sax player than Charlie Parker. Sonny could play faster and cleaner. But it sounded exactly like Charlie Parker, and it wasn’t as good. Stitt was fantastic. But when you compare him to Parker, Parker was the one who created it.

“Stitt could do all the same stuff without making those chirping sounds that Bird made. If I hear somebody on the radio [who sounds] like me, I think: ‘Why are they even playing that? Why don’t the record companies sign somebody new and different?’ It’s depressing. It used to be there was a finite number of artists who made records. Nowadays, it seems like anybody can make records. Maybe I’m a little snobbish, but I’m proud of being in this fraternity or sorority-let’s call it a club. I’m part of a club, and it seems like anyone can get in now.”

G, 42, is not yet ready to acknowledge any complicity for fostering the aesthetic limitations of a genre he was instrumental in popularizing.

But he appears genuinely concerned that millions of listeners have been led to believe that an art form as rich and vibrant as jazz is as slick and bereft of innovation as the music often heard on smooth jazz radio. And he now believes he has a duty to make his fans aware of the vital contributions of Armstrong, Getz, and other jazz immortals.

“As I reflect on the success I’ve had, I realize there are a lot of people who listen to my music who have no idea about Armstrong and Getz,” G said.

“I think it’s almost an obligation for me to acknowledge them, and to introduce that whole time period and those artists to the people who have supported me. And we’re going to give a portion of the profits from my next album to [support] music in the schools, which is where I learned to play saxophone. So the theme is me giving back to the system that propelled me into being a musician.

“Usually when you make an album, it’s self-serving: you make it for yourself. This is about introducing people to other artists and songs, and giving money to schools.”

Might this also be a crafty way to try to stem the tide of verbal abuse he has endured ever since his fourth album, 1986’s multimillion-selling Duotones, made G the bane of so many jazz critics?

“No, not really,” he replied. “I’m not out to get critical acclaim for it, but I think the critics will have a hard time being negative. Because part of the reason for doing this is to acknowledge and introduce people to these great players, instead of being [a target for comments like]: ‘What he does isn’t jazz.’

If they’re going to get critical, they might say: ‘His interpretation isn’t what we like, but it’s great to have these songs out there.’ I’m not doing it for that reason. But if I was a critic, it would be tough for me to criticize this album.”

Critics, perhaps. But not other musicians.

Apprised recently of G’s plans to record an album of music by Armstrong, Getz, and other greats, pianist Fred Hersch almost sputtered.

“My gut reaction is that it’s like Paul Whiteman trying to ‘make a lady’ out of jazz, “Hersch said. ‘I don’t think we need Kenny G to be a spokesperson for Louis Armstrong. I think Louis speaks fine for himself.

“I wouldn’t care if Kenny G played something by Roland Kirk. It doesn’t make any difference, because he’s not a jazz musician. He’s the only person I’ve ever seen who is able to smirk while playing the saxophone. I don’t know how much more I need to say.”

“None of those people need Kenny G or anybody else to validate them, McPherson said. But it’s true that his audience probably does not know Armstrong or Getz or Charlie Parker. So if he feels like his audience should be more familiar with those people, I can’t see anything aesthetically wrong with that.

“I guess we’re judging his credentials to even do that. Since no one’s heard it yet, it depends on how it comes off. I’m not offended that he wants to do it; I would be offended if it sounded bad, in my subjective opinion. If he does it in a good or interesting way, I would give him an ‘E’ for effort.

“And unless he was totally an idiot, he would have to know that smooth jazz is a limited format, in terms of emotional dimension. A guy like Kenny G has to know he’s an artist painting with only a few colors, not the full palette. A person with any musicality would get tired of that.” McPherson sighed.

I only wish I could push a button so that the public would not need Kenny G to tell them that Armstrong, Parker and Getz are great,” he said. “And don’t discount the fact this man is probably a multimillionaire, so he doesn’t have to do it for money. He doesn’t have to have another hit to re-do his living room.”

G affirmed that raking in more money was not his motivation for turning away from smooth jazz.

“I’m not doing this to sell more records,” he said. “I’m doing it because, creatively, it’s time for me to do something different. And, at the same time, I’m not bending too far.

“At the end of the day, there won’t be any risk. Because if I like it, it’ll be a success.”

Kenny plays a 1957 Selmer Mark VI soprano saxophone and uses Frederick L. Hemke reeds with a numbered strength of 2. His soprano is equipped with an AKG 747 mini-shotgun microphone, which is attached to a custom-build mount made by Robert Nelson of Baltimore. He also uses a Lexicon 200 processing unit.