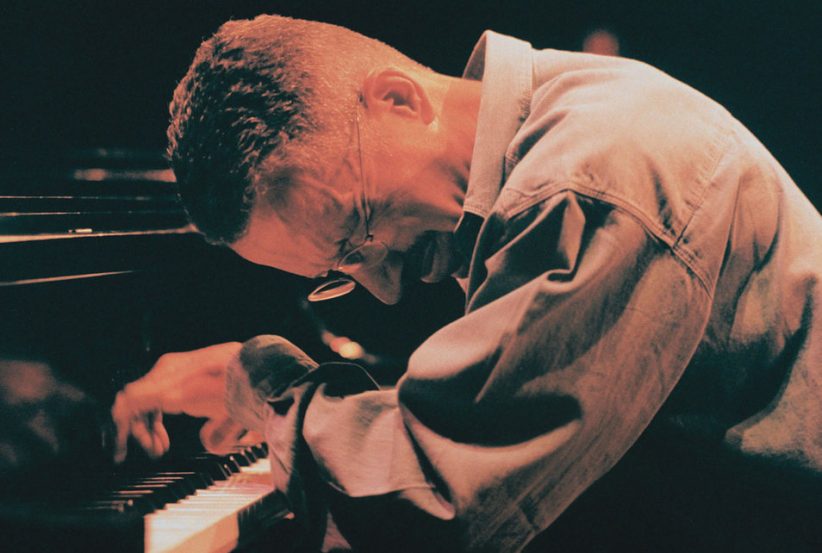 Introducing the Keith Jarrett Trio, Paul Nelson of KPLU-FM repeated to the capacity audience something that Jarrett told him: “What I do is turn energy into music.” That credo by proxy contained the pianist’s only words of the evening. Before the imposing backdrop of rich woods and towering organ pipes in the home of the Seattle Symphony, Jarrett, bassist Gary Peacock and drummer Jack DeJohnette delivered on the audience’s expectations at this key concert in the final week of Seattle’s 11-day Earshot Jazz Festival.

In the wake of the trio’s new ECM CD, Inside Out, the question hanging in the air of Benaroya Hall was whether they would follow up with more free jazz or play the standards that gave the band its nickname. The answer was both, but mostly standards. Ruminating through a long, unaccompanied introduction, Jarrett led the way into an “On Green Dolphin Street” that might have been a tribute to Bill Evans. He saturated his solo with Evans voicings and rhythmic figures. Some listeners complained later that the bass sound was mushy, but from where I sat, the size of Peacock’s tone, the precision of his attack, his perfection of note choices, were perfectly projected. DeJohnette’s drums were overamplified, so that the listener’s ear had to attempt to correct the balance the audio operator should have established in a sound check. DeJohnette’s four-bar exchanges with Jarrett and Peacock initiated among the three smiles and nods of affirmation that continued for two hours. There was no evidence of Jarrett’s reputation for prickliness. They were having a good night of empathy and interaction, and it showed on their faces.

Jarrett reworked the melody and harmonies of “My Foolish Heart” with so much ingenuity that the piece’s identity was a closely held secret. After his solo and an equally mesmerizing one by Peacock, he played the final 16 bars of the ballad’s familiar melody. A woman near me, following a sharp intake of breath, said, “Oh,” giving voice to most of the audience’s moment of recognition. A long solo vamp by Jarrett introduced “Out Of Nowhere,” the intensity of his rhythm building toward the melody. By this point in the concert, Jarrett was spending little time on the bench. On his feet, bobbing, weaving, swaying, dancing, he maintained his musical continuity even as his lower body was angled under the piano or he went into a kind of kick dance that was disarmingly reminiscent of Chuck Berry’s chicken hop. The only defense against these actorish distractions was closed eyes. Behind Jarrett and Peacock, DeJohnette popped and crackled. The performance received a shouted ovation. A ballad, “I’m Gonna Laugh You Right Out Of My Life,” ended the first half of the concert, with Jarrett’s finger vibrato adding tonal color. DeJohnette’s brushwork behind him was exquisite.

A few words from Jarrett would have been helpful in identifying the ballad, presumably his composition, that opened the second set. It had the feeling of a blues, although it was in AABA form, with a gospel-tinged bridge. It inspired by-play that had Peacock and Jarrett beaming at one another. Jarrett kicked off “Four Brothers” at a tempo half again faster than Woody Herman ever played it. He flowed through a solo dazzling for its articulation and flow, ended it abruptly and jumped to his feet to make a quick stage-right circuit and perform arm stretches. He settled back onto the bench to comp behind Peacock’s and Jarrett’s collaboration on what amounted to a simultaneous solo loaded with rising and falling dynamics. Jarrett’s celebrated, or notorious, vocal accompaniments were fewer than usual, but during “Little Man You’ve Had a Busy Day,” he leaned to the left and moaned loudly, apparently in appreciation of the beauty of one of Peacock’s note choices. Standing during a double-time passage, Jarrett somehow managed to keep his equilibrium even though his legs were under and nearly parallel with the keyboard. Captivated by the ethereal ending of the piece, people on the main floor and in the three tiers of balconies around the hall, stood to applaud.

Choruses of “Straight, No Chaser” at a furious tempo were bookends to an extravaganza of free playing perhaps inspired by the Thelonious Monk blues but independent of its harmonies or anything else but Jarrett’s, Peacock’s and DeJohnette’s spontaneity, quick reflexes and musicality. Now, nearly everyone in the hall rose for a standing, shouting, whistling, stomping ovation. After three curtain calls, the trio played Clifford Brown’s blues “Sandu” as an encore. It was packed with more of the fun they had been having all evening, and smiles back and forth among the three. Reacting like a European festival audience, the crowd launched another ovation until the band reappeared for a second encore, “I Guess I’ll Hang My Tears Out to Dry.” Peacock grinned at Jarrett after the pianist resolved a wrong note to make it sound as if he intended it to be the beginning of a descending phrase. The dynamics of the last half-chorus, soft to softer, were remarkable. The crowd coaxed the musicians back on stage for another round of bows, trying for a third encore but failing to get it. Despite scattered grumbling about the sound balance and Jarrett’s theatrics, most of the audience left fulfilled.