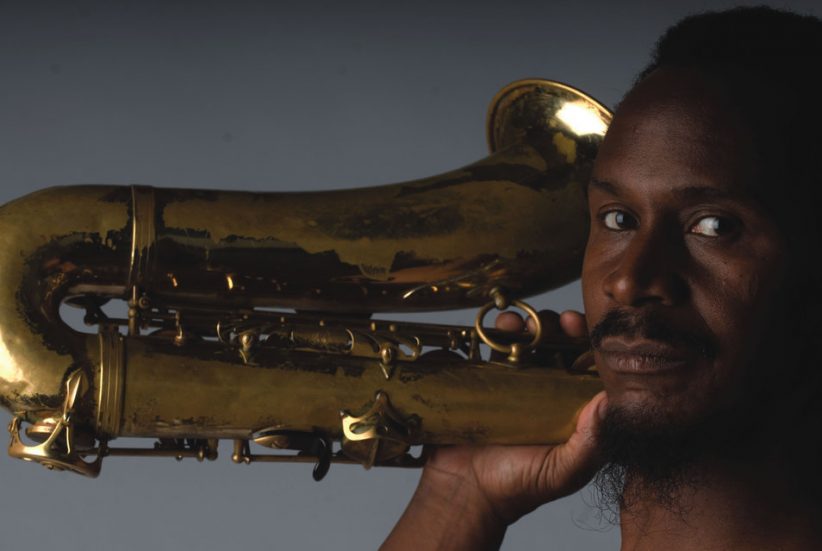 But sweep back the curtain and you see that the ultra-hip tenor saxophonist is a lot like you and me, shuttling his three kids-ages 12, 11 and 9-to various activities in and around their San Diego home. Like most pre-teens, their musical tastes have nothing to do with their dad’s. “I’ve listened to a lot of music I never would have heard if not for them,” Denson said on his cell phone, on his way to another hotel and another gig. “I actually really like *NSYNC,” he adds. “I like R&B and funk, and I found them to be well produced and well written.”

If there’s any justice, Denson’s kids will soon move to their pop’s brew of acid-jazz, funk and R&B, whose loose structure, muscular rhythms and free-form groove are far removed from the rigidity commercial music demands. Creating a new challenging format for himself is one reason Denson debuted the trio concept in the same year he and Andreas Stevens (aka Greyboy) resurrected the Greyboy All-Stars’ boogaloo for their first CD in nine years, What Happened to Television?. “The last few years I’ve seen bands like Soulive and Medeski, Martin and Wood really change the idea of jam bands,” says Denson, who spent six months shaping the grooves of Lunar Orbit. “Of course, the idea that we started with ended up completely different. We wanted it to sound big and funky with a trio, but we also worked on melodies and changes in the jazz tradition.”

It’s likely Greyboy and KDTU followers will embrace the concept of KD3 and its get-up-and-move aesthetic. “It’s just smaller than Tiny Universe and Greyboy, with their big horns on top of everything,” Denson says. “The trio allows me to present an array of music in a more exposed and demanding way.” Lunar Orbit is a trio CD, but it has a revolving cast that joins Denson on alternating tunes. The players include Anthony Smith, Kenneth Crouch and Will Blades on keys, and Aaron Redfield and Jake Najor on drums. Steve Haney throws in congas on five tracks. (On tour, Denson is joined by Smith and Najor.)

Taken as a whole, there’s a bunch of space-age organ blasts, zippy flute excursions, and more than a few of Denson’s bop trips he’s displayed on the solo projects. There’s also one nugget, “Won’t Somebody,” that could slide seamlessly onto smooth-jazz playlists much as saxophonist Kenny Garrett’s “Simply Said” did in 1999. It’s as if Denson wanted to say, “Here you go, amuse yourself with this mellow pop groove.”

Of course, Denson has proven that he could play along with the pop-R&B-funk thing. Beginning in 1989, Denson spent four years recording and touring with Lenny Kravitz, saxing up Kravitz’s first two CDs, Let Love Rule and Mama Said. It was at the end of this period that Denson and DJ Greyboy’s “Unwind Your Mind” lit up the European dance floors. And while touring and recording with Greyboy, Denson also recorded four solo CDs for the German jazz label Minor Music.

Lunar Orbit is the first recording on Denson’s own Bobby Ace Records, and it doesn’t appear it will be the last. Like many musicians, he embraces the independence. “There’s freedom in not being told by the labels what to do,” says Denson. “It’s not economically feasible to make records for a small amount of money for labels who don’t promote you.” Nothing is final, but Denson hopes to offer two CDs on Bobby Ace in 2008: a new KDTU record and another by New Orleans guitarist Benny Dominach, who Denson has jammed with in his Benny D Band.

Denson says he’ll also continue to share his sax and flute vibe with others. He’s recorded with producer and keyboardist Jason Miles for Miles’ Soul Summit project, which will release a live album, Can You Feel It, in January on the Shanachie label. Another Miles project, Global Noize, will also have Denson’s sax in the mix. “He’s absolutely one of the baddest,” Miles says. “An incredibly soulful sax player who also plays great flute. That’s something rare: a player who is a virtuoso but also soulful.”

Whether solo, trio, band or another configuration, there’s no doubt Denson will continue with his particular amalgam of music. “There’s some great stuff coming out of the acid-jazz/jam-band scene. It’s an alternative place for jazz musicians who realize they don’t want to play traditional jazz. It’s a haven for the real free spirit [of] what the music is, pushing the jazz tradition forward.”