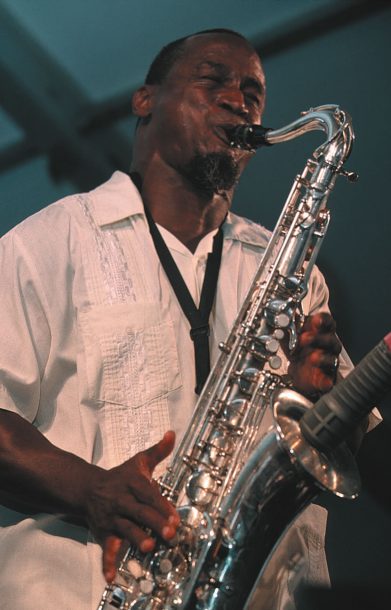 In the past few years, the frontman for the now-defunct acid-jazz pioneers Greyboy Allstars has become one of the most popular groove-jazz saxophonists, because of what he calls the “two-way embrace” between himself and the younger jazz fans who “want it more lively and danceable.”

Growing up as a fan of John Coltrane, Freddie Hubbard and Herbie Hancock, Denson is one of the leaders of a new fusion, mixing hip-hop, soul and rock into an uptempo jazz. The 44-year-old Californian’s continuous touring with his band, Tiny Universe, exposes Denson to a wider audience on the jam-band circuit, touring with groups like Phish and Medeski, Martin and Wood.

Denson, who played in rock singer Lenny Kravitz’s band, gives credit to the burgeoning youth audience for giving him the opportunity to do what he wants. “When I saw the pendulum swing back to what I was interested in,” he says, “I really took advantage.”

For Dance Lesson #2, Denson recruited some of his friends to form an all-star band including guitarist Charlie Hunter, bassist Chris Wood (of MMW) and DJ Logic for a side project. Denson shopped the record to labels and Blue Note offered him a multirecord deal. Not part of the Blue Note deal are two albums Denson has in the can: a Tiny Universe live album and a duo CD with bassist Chris Wood.

Even though Denson has found success in the evolving jam-band scene, he has been making uptempo jazz records since the early ’90s (when he stopped working with Kravitz), once recording Jack DeJohnette and Dave Holland in his trio. Denson, though, became more confident in his playing as a member of longtime James Brown trombonist Fred Wesley’s band on different occasions throughout the 1990s. “Lenny was great for my career,” Denson says, “but Wesley was best for my playing.”

Believing that the best way to hear his band is in person, Denson has become an advocate for fans to record and share his music. “People get to hear our music without having to buy the albums-it’s really to our advantage.”