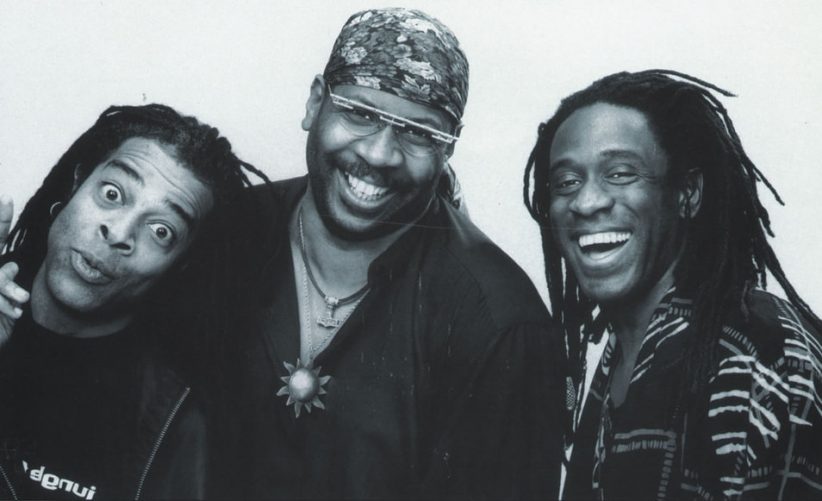 Deejay driven dance culture has, in a lot of ways, issued a challenge to traditional musicians. Progressive groove trio Jungle Funk flips the equation, challenging deejays, mixologists, and sound sculptors to sound as cool as them.

“We are messing with frequencies,” says bassist Doug Wimbish, who teams with former “Living Colour” cohort Will Calhoun and vocalist Vinx.

“A lot of the deejays are recycling and re-sampling the same things, while other people get themselves boxed into one mode, while everything passes them by.” Judging from the sounds on the group’s stunning self titled Zebra Records debut – looped sounds combining effortlessly with improvised grooves-this outfit has left more than a few folks in their rearview mirrors.

Vinx has been melding jazz and Afro-pop with artists like Sting, Herbie Hancock, and Me’Shell Ndegeocello for years, while Calhoun has worked with Wayne Shorter and Marcus Miller. Wimbish, on the other hand, was on hand for the formation of rap, as a member of the house band at the legendary Sugarhill Records. So there’s a lot of collective history there. Not to mention a deep and abiding devotion to the live music aesthetic. The instruments on Jungle Funk are not only live, but performed in real time, through an ingenious manipulation of live-improvised samples and digital textures. The entire album was recorded live in Austria. Their process is simple: loop a motif, improvise off of it, and let the rest of the ensemble build and feed. On tunes like “Ugly Face” and “Torn,” Vinx’s wistful vocals float over Wimbish’s multihued low-end work, while Calhoun generates Goldie-ish beatology on “Headfake.”

“When you see us live, you will wonder how three guys can do so much, and sound so big,” says Vinx. “The idea that we are doing it all live is what makes it so special.”