Skip to content
Become a member and get exclusive access to articles, live sessions and more!
Start Your Free Trial
Home > JT Archives > Julian Pavone: Rimshot from the Booster Seat? 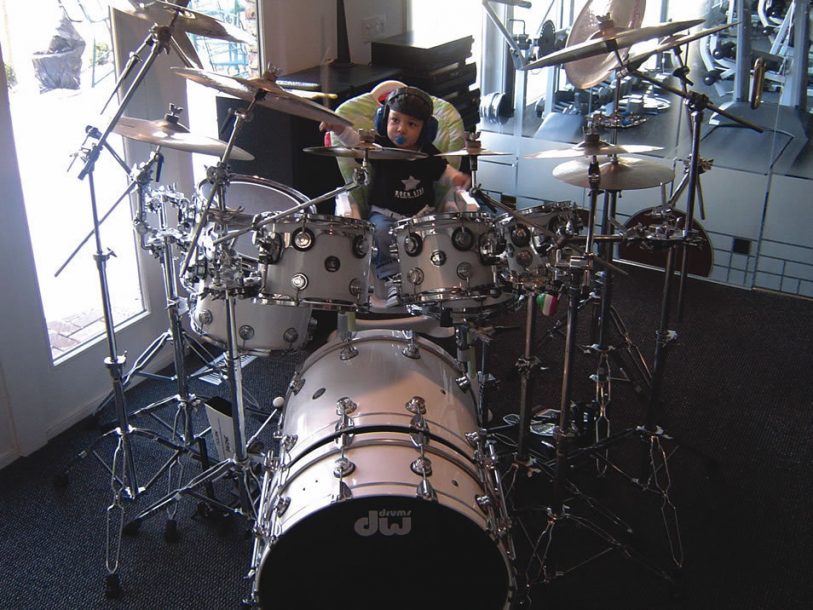 Most drummers would kill for this kind of exposure-a new CD, national tour dates, continuous media coverage, Hollywood movie deals and even a clothing line. Yet Julian Pavone seems particularly at ease with his newfound fame. This is remarkable considering Pavone has only played drums for two years. It’s even more remarkable considering Pavone hasn’t done much of anything for more than two years. After all, he just celebrated his second birthday in May with toys, cake and, of course, drums.

Now that’s something that would make even Art Blakey jealous.

“He’s just always loved the sound of drums,” says Julian’s father Bernadino Pavone, who began his own drumming obsession in the second grade. “I had Julian in my lap while I practiced drums,” Bernadino recalls, describing an incident that occurred shortly after Julian turned three months old. “He just grabbed the sticks from my hand and starting beating on the snare.”

From there, Julian began imitating his father’s drum rolls and playing along with classic-rock recordings. He became enamored with the drums; he began practicing two hours a day. “He usually plays in the morning for an hour,” Bernadino explains. “Then, he’ll play another hour in the evening after his nap.”

Surprisingly, Julian’s dedication paid off rather quickly. In late 2005, at only 21 months of age, he released his first recording, Go Baby!-a four-song jam session with legendary bassist and family friend Ralphe Armstrong. Like most musicians who have played with Julian, Armstrong was skeptical at first. But Julian’s abilities quickly won him over.

“He said his son was 16, but I didn’t think he meant 16 months old,” jokes Armstrong, who has played with the Mahavishnu Orchestra, Jean-Luc Ponty and Geri Allen. “When I heard him play, though, I was flabbergasted.”

Detroit producer Brian Pastoria first saw Julian in an online video. “I thought it was surely doctored footage,” admits Pastoria, who is producing Julian’s next album. “But after seeing him play in person, I was amazed.”

After Go Baby! hit the shelves, news of Julian’s talent spread quickly. He has already performed on Good Morning America, the Martha Stewart Show and Inside Edition. Earlier this year, Julian was the main attraction at a two-hour drumming clinic at a music store near his family’s home in Bloomfield Hills, Mich. And he and Armstrong headlined a concert at the House of Blues in Cleveland. Julian is also a member of United Drum Line, a troupe that performs during halftime at professional basketball games.

A typical set for Julian is 15 minutes long and includes mostly extended jams. “He’ll play along with just about any music he hears,” explains Bernadino, who has been trying to expose Julian to more and more jazz. Musicians who have played with Julian claim he appears to have an easier time with more difficult songs with intricate time signatures. “When I met him, he was hitting in 7/4 time and doing triplets,” Armstrong explains. “He’s just learning to do a straight beat now.”

Though he can play nearly any genre of music, Julian requires some special accommodations. Less than 40 inches tall, Julian uses a modified stool to reach the bass drum of his full-size Drum Workshop kit, which contains 10 cymbals, two snares and an assortment of tom-toms.

Bernadino works full-time running Julian’s career. He launched a Web site (littledrummerbaby.com) touting Julian as “the world’s youngest drummer.” And, recently, he unveiled a line of T-shirts adorned with that slogan. A documentary movie deal is also in the works.

“We’re not pushing his career like stage parents,” Bernadino says. “We’ll help him out as long as he wants to do this.” In the meantime, Julian spends most of his days like a typical two-year-old: playing with friends, napping in the afternoons, and practicing 9/4 beats on a 20-piece drum set.

Now that’s a life Art Blakey would approve of.