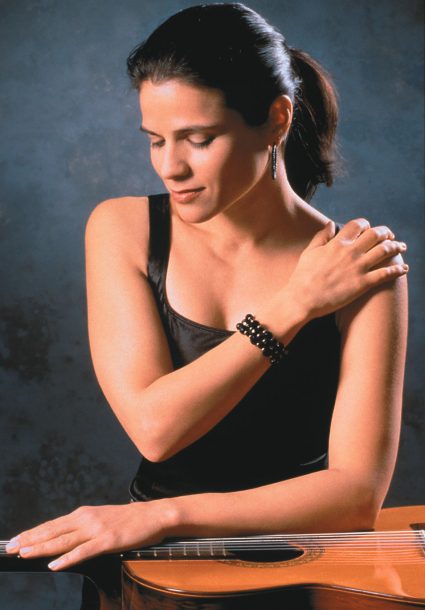 When guitarist Joyce Cooling’s debut recording came out in 1997, it headed for the top of the smooth jazz charts and she was rocketed into prominence as an “overnight sensation.” But “overnight” was really a period that lasted ten years, a time she spent developing craft (from straightahead jazz to Brazilian music), making connections and playing small clubs in the Bay Area.

That first release, Playing It Cool, on the Heads Up label, simply caught fire, and Cooling modestly states that it enabled her to “poke through with widespread national radio play” and enabled her to travel more.

Now she’s released her second recording, Keeping Cool, also on Heads Up, which is equally as eclectic as her first: smooth jazz gems are interlaced with other musical ventures, including her passion for Brazilian styles and vocals.

Cooling’s ultimate musical pleasure is composing and, as on Playing It Cool, all tunes on Keeping Cool are by her and her associate, Jay Wagner, who also produced the recording and plays keyboards. Joining them is Gary Calvin on bass, Billy Johnson on drums and Peter Michael Escovedo III on percussion.

“I have to have harmony in my music,” she says. “And I also need percussion which suits the guitar. What the guitar also brings me is its voice-like quality; it lets you bend notes like the human voice. It just lends itself to expressive ways of playing.”

Cooling says her musical outlook, as well as her band, are continually evolving. “We want to incorporate some different styles and keep moving. I also want to do more vocal things; I’m no diva, but I love to sing tunes that are suited for me,” she admits. “And our material will always be original. Writing, for both Jay and me, is our greatest love; we always have more tunes written than we have room to record. That’s what makes me the happiest.”