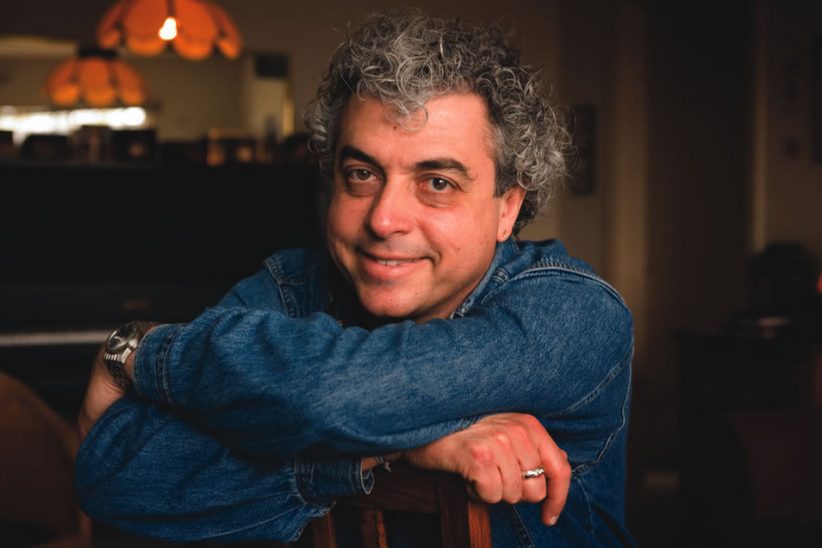 To spend time with Jovino Santos Neto at his home in the Madison Park district of Seattle is to realize that an artist’s personal space is not defined by his living quarters. The apartment that Neto and his wife, Luiza, have shared for 10 years is small and unpretentious. But by any other measure-life experiences, intellectual commitments, linguistic skills, travels, passions-Neto’s universe is vast.

He was born 51 years ago in Rio de Janeiro and studied piano for six months with a private tutor when he was 12. He majored in biology in college: first in Brazil, then at McGill University in Montreal. “Music was my hobby. Science was always going to be my job,” he says. His native language is Portuguese, but he was already fluent in English when he went to Canada. “I also speak Spanish, and I’ve picked up French and Italian from traveling. If I go to China, give me a couple weeks and I’ll be talking Chinese.”

Montreal gave him new opportunities to meet jazz musicians and play. But when he graduated in 1977, he returned to Brazil fully intending to enter a master’s program and become a researcher living in the Amazon, working with primates or water mammals or river dolphins. “Then I met Hermeto Pascoal at his house. We shared a little music and suddenly he said, ‘I’ve got a gig this Friday. Can you read?’ I said ‘Yeah.’ It was bullshit. I mostly just played by ear. So he put a chart in front of me and I made a complete fool of myself. He laughed and said, ‘You come back tomorrow. We’re gonna work a little bit.’ ‘A little bit’ turned out to be 15 years.”

On one of his many international tours with Pascoal, in 1990, Neto discovered the Pacific Northwest and Seattle. “I was fascinated by the water and the greenery and the mountains. I remember telling Hermeto, ‘I could live in this place.'” When he left Pascoal in 1992, he moved to Seattle with his wife and two children. He began attending Cornish College of the Arts and after two semesters joined the faculty, teaching rhythm and ear training.

His two-bedroom apartment is in a large brick complex just south of where the Evergreen Point floating bridge over Lake Washington connects to the Seattle shoreline. The rooms lack the creative clutter that is typical of artists’ homes. The book and CD collections in the living room are small. There is a framed Earshot Jazz 2004 Golden Ear Award for Best Northwest Jazz Instrumentalist and a small photo of Pascoal. A Milton upright piano takes up one wall. “I write at home, but I practice on a really nice piano at Cornish. Seattle has been a good base.”

From that base Neto has recorded three albums and toured the Northwest and beyond with his Seattle quartet (saxophonist Hans Teuber, bassist Chuck Deardorf, drummer Mark Ivester). His ongoing projects include compositions for chamber music and big bands, jazz camps and collaborations with Native American musicians. But his single most important achievement to date may be his new album on Adventure Music, Roda Carioca. “It was the first time that I went back to Brazil to record my own music. It was a way of proving to myself that I had never cut the line, I had just stretched it.”

The album is built up from a core trio (with bassist Rogério Botter Maio and drummer Marcio Bahia) to which guests are added from a circle (“roda”) of exceptional Brazilian musicians. The outcome is a mosaic of the eclecticism unique to Jovino Santos Neto, configuring European classicism and layers of Brazilian rhythms and American on-the-edge jazz into an organic whole.

“Playing improvised music is about developing reflexes. You’ve got to sharpen your perception so that you catch the first idea. Most of the tracks on the new album are first takes.”

“I’m a good cook. It’s like music. I like to walk up to a piano with no notes in my head. I like to go into the kitchen and say, ‘OK, I’m going to make a meal now and I have no idea what’s in the cupboard.'”

“Challenged,” Neto admits with a rueful smile. He has a small Aiwa shelf system, a Philips 27-inch TV, a basic DVD player and a VCR he found in the dumpster of his apartment complex.

“I read books on airplanes about the cognitive and evolutionary aspects of music. The Singing Neanderthals by Steven Mithen is amazing. So is Hearing in Time by Justin London. It talks about how the brain is organized to understand cyclic events, like rhythm.”

“Two older Toyotas. I have to be able to fold down the back seat to put a keyboard inside.”

“We belong to Netflix. I love movies. I especially love Indian and Japanese films. I’m a big Kurosawa fan. Medieval Japan feels like home to me.”

“I could never learn to kick a soccer ball straight.”