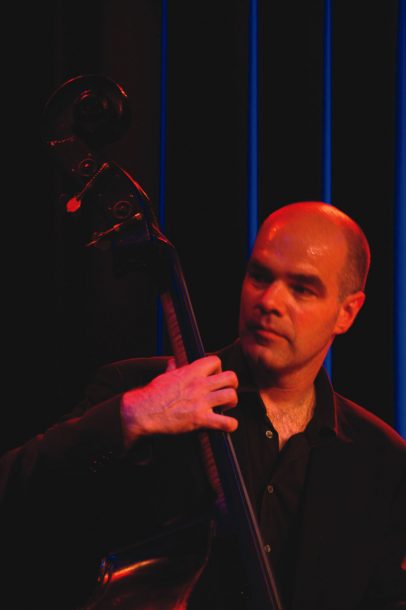 Joris Teepe was a man on a mission when he arrived in New York 14 years ago from Holland. Without a scholarship to any of the prestigious jazz schools in the area and with no promise of any gigs, he came to town all the same in search of Ron Carter. “I never met him, and I knew it was kind of tough to get him to accept you as a student,” Teepe says. “But right before I came here I was lucky to do a short tour in Europe with Slide Hampton. And Slide told me, ‘When you get to New York and you need some help, just call me.’ Slide was the only person I knew when I set foot at JFK airport. So I called him, and he called Ron and recommended me.”

Teepe’s studies with Carter would last only a few months, but he subsequently continued his jazz education by soaking up New York’s intense and highly competitive scene. “I checked everybody out that I could: Rufus Reid, Buster Williams, Peter Washington and all the great bass players I could find around town. I’d hang out every night in all the clubs, and I really learned a lot from that whole experience.”

Through hanging, jamming and gigging, Teepe elevated his game considerably in his first eye-opening year in the Big Apple. “There’s a special kind of determination and some incredible experience that musicians here bring to the bandstand,” he says. “It’s so powerful, and you have to be very strong to be able to play with that. You have to make them feel like you are an equal to them. Otherwise, they just walk over you, and it doesn’t hold. But if you really want to play together and communicate on the bandstand, you have to bring that same power. And there’s no choice. It’s like, do that or just go back home.”

Now a seasoned New York City veteran himself, having racked up a wealth of sideman credits with the likes of Benny Golson, Tom Harrell, Cyrus Chestnut, Carl Allen and John Abercrombie, Teepe is imparting wisdom to aspiring players back in his native Holland. As head of the jazz program at Prins Claus Conservatoire of the Hanze University in Groningen, he has assembled a faculty consisting of such fellow NYC players as pianist David Berkman, tenor saxophonist Don Braden, pianist-vocalist Dena DeRose, trombonist Conrad Herwig, trumpeter Brian Lynch, guitarist Ron Jackson and drummer Ralph Peterson. Each spends a week with students in Groningen on an eight-week rotating schedule.

Last year, Teepe rounded up his illustrious faculty for a session at Knoop Studios in New Jersey. Collectively known as the Groningen Art Ensemble, the group’s first recording, Jazz in Jazz Out (Planet Arts), has each member showcasing an original tune or favorite standard. “Technically I’m leading it, but I asked everybody to contribute and put something together for this project,” he says. “So we did the recording and then we started to do gigs and it sort of became a group.”

The left-handed Teepe plays huge-toned lines on a 100-year-old German bass made in Mitterwald. “My philosophy is ‘Your sound is in your head, next it’s in your fingers and third it’s in your bass,'” he says. That resounding tone provides the backbone throughout Jazz in Jazz Out and also on a more personal project, 2004’s Going Dutch on Twinz, which showcases Teepe’s considerable composing and arranging skills in ambitious small group settings (featuring pianist George Colligan, drummer Gene Jackson, trumpeter Randy Brecker and saxophonist Braden).

The in-demand bassist can also be heard on the Rashied Ali Quintet’s recent two-volume Judgment Day, on the drummer’s own Survival label, and with the Brooklyn Big Band, whose self-titled debut on Candid was recently released.