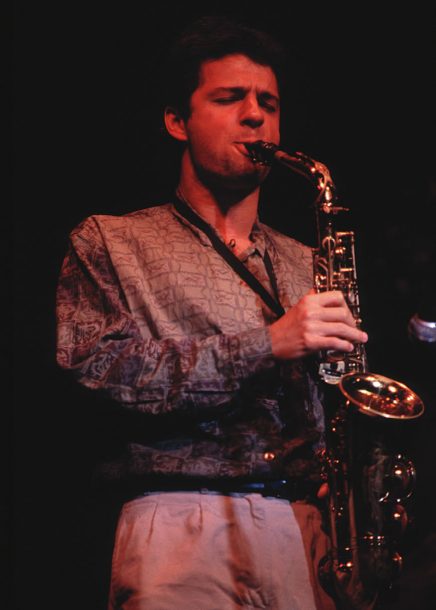 In the classical world, the growing circuit of competitions is an accepted part of the machinery for young musicians trying to start a career. Jazz has different systems and proving grounds, but there are exceptions-chiefly, the annual Thelonious Monk Institute competition. The striking alto saxist Jon Gordon won in 1996, the 10th anniversary of the organization and a televised event.

Gordon, remembers both the pleasant shock and the ambivalent feelings upon accepting the award at the Kennedy Center. “When I accepted the award, I got a chance to speak and I said `You know, we all know music is not about competition, but if this gives the music some more exposure to the general public, then great.'”

Born and raised in Staten Island and a habitue of New York all his life, Gordon has hardly come from out of the blue, having worked with Maria Schneider, T.S. Monk, Phil Woods, Harry Connick, and numerous other sideman situations. He has also built up a sturdy reputation as a leader, having made several albums under his name, including the warmly received 1997 album Along the Way, on Criss Cross.

On his newest album, Currents-for Jamey Aebersold’s DoubleTime label-Gordon found himself influenced by Latin American concepts, both directly and through the prism of pianist Ed Simon, who joins an all-star group, including drummer Bill Stewart, guitarist Ben Monder-whom Gordon has known for a decade-bassist Larry Grenadier, and percussionist Adam Cruz.

“I’m not an expert. I’m just a novice student and appreciator of South American music. I think the music can have a lot of influences running through it. I like being open. I listen to a lot of classical music and lately, I’ve been listening to music I grew up with, by the Police and Stevie Wonder.”

For Gordon, the Monk award helped fuel his career, but didn’t guarantee instant industry clout. As fellow altoist Bobby Watson points out in the liner notes to Currents, the lack of major label interest in Gordon may be indicative of warped artistic perspectives. Gordon, not lacking for candor or humility, sees his discography thus far as an evolutionary process, and not a matter of chasing gilded deals.

“Honestly, my feeling is `Why isn’t Charles McPherson on a major label? He’s a giant.’ There are a lot of great players who deserve that.

“My priority is just growing. I know it sounds pretentious, but it’s really my priority. To be able to do that, you’ve got to work. I spent a lot of time in my early 20s when it was really a struggle and there was very little work. As long as I’m working, I’m thankful. There’s only so much you can accomplish in the practice room.”