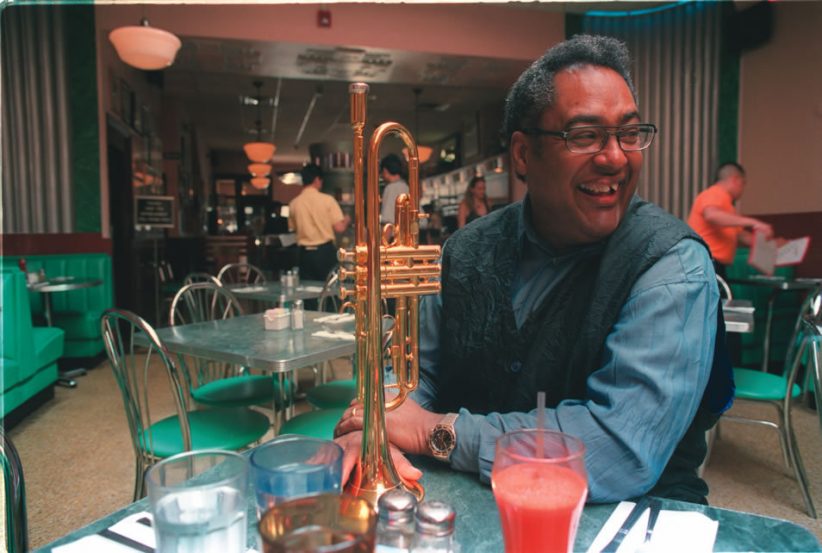 With its old-fashioned soda-fountain counter, vintage metal stools and antique decorations, Baumgart’s Cafe in Englewood, N.J., is a special place. Its eclectic menu includes ice-cream sundaes, fresh-squeezed carrot juice, grilled-cheese sandwiches, fried dumplings, sushi, Asian noodles and omelets. But it’s not just the food that draws trumpeter Jon Faddis from his nearby Teaneck home. It’s also the memories, a clue to which one can find near the front of the store, where you can see the requisite handful of autographed celebrity photos. Among them is one from Dizzy Gillespie.

“That’s one of the places I used to go with Dizzy,” Faddis says of the quaint restaurant a few blocks from a sign the town erected in Gillespie’s honor. The family-owned restaurant changed hands since Dizzy’s day, adding some Asian specialties to a menu that still carries diner and ice-cream-parlor staples.

“Dizzy used to love to go into this restaurant and eat. And he loved to eat, period. He would pile up food on his plate, dig in. ‘I’m still hungry,’ he would say after finishing two main courses,” Faddis laughs.

“One time at a restaurant in Atlanta, Georgia-it was a soul-food place-Dizzy said, ‘Well, I want the grouper.’ They brought out a platter with this gigantic fish on it, and he ordered one of every side dish they had. He ordered candied yams, collared greens, macaroni and cheese, potato salad-he had like six or seven side dishes around this fish. And then when he finished that he looked at the lady and said, ‘Yeah, that was good. How much is that cake?’ It was a coconut cake.

Faddis admits to watching his diet a lot more carefully than his mentor did, but that practice goes back to 1971, his senior year in high school, when he became a vegetarian. “What that meant to me at the time was I was just going to stop eating meat and I continued with my diet the way it was-French fries and Coca-Colas and milkshakes and things like that.

“One time, I was doing that stuff and this guy looked at me and said, ‘You’re a vegetarian? Come on with me.’ And he grabbed me and we went around to the health-food store and he bought me a book called Survival Into the 21st Century. It was a very extreme book about sprouts and raw foods and wheat-grass juice. I went from one extreme to the other. That was my main influence. Now I’m sort of straddling the fence.”

Faddis moved to Teaneck in 1989 in part because of high real-estate prices in New York City. Faddis and his wife, Laurelyn, describe their home as a “simple cottage-style built probably about 70 years ago” and it includes “birdfeeders and stones excavated from beneath Carnegie Hall, when construction of Zankel Hall was underway.”

Faddis said that visitors to his home often stop to look at photographs on the wall featuring him with presidents Bill Clinton and George H.W. Bush from White House performances. “People get impressed about that stuff. But I think one of my favorites is a picture of Dizzy that he signed, autographed to me: ‘To Jon, two hearts as one, John.’ That’s one of my favorites.”

Besides being close to Gillespie, Faddis has also had other notable neighbors. “It’s actually closer to Milt Jackson’s place. It’s like a five-minute walk from his house,” he says. Jackson’s widow, Sandy, still lives there. “She gives great Thanksgiving dinners,” Faddis says. Other couples in the area are Ray and Susan Drummond, Robin Eubanks and Ana Sala, Earl and Cecilia Gardner, Rufus and Doris Reid and Clark and Gwen Terry. It’s also just a short drive from Bennett Studios in Englewood, where he recorded his latest album on Koch, Teranga. In his liner notes for the album, Neil Tesser writes that its title “is a Sengalese word that loosely translates as ‘hospitality.'”

“One of the best aspects about making Teranga is that I could record it close to ‘home,’ yet teranga itself embraces and embodies the philosophy of welcoming and being welcomed wherever in the world you are-being able to feel at home in the world,” Faddis says. He values that feeling, whether it means going down the block for Thanksgiving dinner or being invited to a local musician’s apartment while on the road.

Part of Faddis’ year is also spent at Columbia College in Chicago, where one of the school’s loft apartments makes it “easy to throw pizza parties and impromptu jazz jams for students.” If those spaces didn’t occupy enough of his time, there’s also his compact office at Purchase College in New York, which manages to house a Steinway baby grand, an Apple computer and posters from his many trips abroad.

To Faddis, home “is someplace you really look forward to returning to when you’ve been on the road a long time. Two weeks or more, and you’re looking forward to getting home.”

“I used to have a very, very tough regimen. That was when I was studying karate during the early ’80s. I used to work out a couple of hours, and one time I went out on tour and playing basketball I sprained my ankle really badly. I was still doing concerts but I was really laid up for a while. It still hasn’t healed properly. I don’t have any regimen anymore. I sometimes just meditate.”

“Browsing bookstores. Watching 24, House, Law and Order, Pimp My Ride and cooking shows on television. Breitling watches and Alain Mikli eyewear and Issey Miyake shirts and coats-he’s an amazing designer. Gelato, gelato and more gelato! My good friend Lew Soloff was once in a town in Italy and went and tested out every gelato place. He was having gelato for breakfast. I’m not that extreme.”

“One of the things I read is mystery novels. Anything by Lee Child, Barry Eisler, Arturo Perez-Reverte, Richard Stark and others too numerous to mention.”

“There’s nothing like being on the bandstand and listening to other musicians. But to me, one of my main hobbies is listening to music. The better it sounds, the better I feel. You can put on CDs and sometimes it can be more enjoyable than hearing something live. It’s all balanced, no distraction and you don’t hear someone at the next table drunk.”

Faddis always travels with his iPod, which currently includes “Art Tatum, Monk. A lot of Dizzy. A lot of Charlie Parker. A lot of Coltrane. A lot of Sonny Rollins. A lot of Thad Jones and Mel Lewis. A lot of Count Basie. A lot of Duke Ellington. A lot of Ella Fitzgerald, Sarah Vaughan. Some flamenco. I just found a list that Claudio Roditi made for me about 15 years ago and he had some recommendations for different Brazilian music to check out, so that’s going to be next. Brazilian music and the blues-cats like Memphis Slim, Tampa Red, Cousin Joe and B.B. King.”

For home listening, Faddis has “B&W 801 Matrix 3 speakers, a Cello preamp with six-band EQ, an old Meridian CD player, which needs to be upgraded to one that will read CD-Rs that you make on a computer, two Hafler transnova amps and a Roksan turntable.”

“I drive a Saab Viggen, which they stopped making. We have an Acura MDX, which was highly recommended by drummer Jeff Hamilton and my mother-in-law. And I have a 1973 Mercedes. It has a rebuilt engine in it. I spend so much money trying to keep it running that it’s like a bottomless pit.”

A Punt, Pass and Kick champion as a boy in Oakland, Calif., Faddis admits to occasionally playing golf (“I wouldn’t call it that”) and watching the pros. “I like football. Basketball is not as much fun anymore because it’s so-you know, everybody’s so busy showing off. Sometimes I’ll turn on ESPN Classic and watch Magic Johnson’s Lakers against Larry Bird’s Celtics. I like watching good basketball. Sometimes the WNBA is more interesting to me than the NBA as far as a team sport. It’s more a team game in the women’s league.”