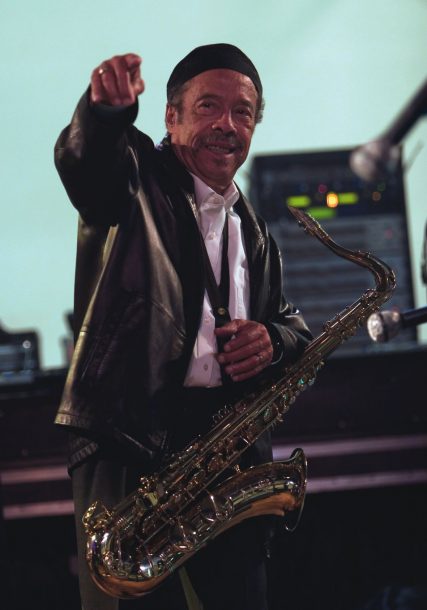 Although we were poles apart in age, Johnny Griffin and I bridged this difference by many shared sensibilities, namely music, spirituality and politics.

Similarly, we moved in disparate geo-political spheres: Griff, as we knew him, was born in wintry Chicago, while I was born in the sunny Caribbean. Later, Griff would emigrate to Europe before settling, eventually, in France; I, by contrast, migrated from St. Thomas to Michigan to Chicago, then Florida, before settling in New York City. Yet we were conjoined by the music. Our friendship-at times like a father and son, at times like brothers-has left an impression in my spirit.

Griff was a master storyteller. One felt his passion for music when he talked about his early years and about the many friendships he acquired during his career. For example, Prez’s name came up as having been influential, as well as Ben Webster. And it seemed that every tenor player I mentioned as influential to me, Griff either knew the musician or had performed with him. In our conversations, he also provided me with an education of America’s social climate and how it affected musicians in that epoch.

Without a doubt, those early conversations and opportunities to perform beside Johnny were akin to master classes for me. They also paved the way for Johnny to be the special guest on my first release, Up Front & Personal (2001).

I remember spending time with Johnny in December 1993, at the Umbria Jazz Winter Festival in Orvieto, Italy. I was as a member of Roy Hargrove’s Quintet and this was my first opportunity to record with Johnny Griffin. The sessions became part of Roy’s CD, With the Tenors of Our Time. I cherish memories of that week. Accompanying us in that beautiful town were our families. Between recording sessions and the festival performance schedule, we wandered through the narrow streets and discovered the charm of Umbria, and ate in good restaurants.

In subsequent years, my family and the Griffins remained in contact. On one occasion, my wife, Grace-Ann, and I visited Johnny and his wife, Miriam, at their home in Southern France, accompanied by Maya, our daughter, then five months old.

On another occasion, during a summer tour in Europe, I made a return visit to the Griffins’ home. I found Griff’s mood reflective and he was speaking in superlatives: his favorite musicians, his favorite arrangers and his favorite composers. He reminisced about his musical relationships, such as his association with Eddie “Lockjaw” Davis, plus his days in New York City around pianists such as Thelonious Monk, Bud Powell and Elmo Hope. And he talked freely about his life at strategic points. This carried over to the piano, where Griff sat to play some of his own compositions, as well as Monk’s.

Needless to say, interwoven in this tapestry of conversation were running commentaries about composition, practicing, mouthpieces (Johnny had said that he ruined many trying to improve them!), spirituality and, of course, reeds. Many of these conversations occurred in his den-the high-ceilinged study where Griff maintained his grand piano, his stereo, the desktop computer for notating compositions, and where he displayed artifacts collected from his days touring. It was also the place where his tenor sax resided, and upon entering the den, beside the doors, there were coat hooks where neck straps for Griff’s saxophone rested.

In the late afternoons, we swam to escape the heat, and in the evenings, we ate outside while listening to music. And always, laughter flowed. With Johnny, this was a given; he had a special knack for appreciating life.

On account of the transatlantic divide, we spoke frequently by telephone. Music may have been the least of our topics. We exchanged book titles as often as views on politics and current issues. No doubt, if he were here, we’d have had a spirited discussion on the 2008 presidential election! In recent years, I saw him when he performed in NYC, including his final appearance in the fall of 2007. It was his first time to meet my youngest daughter, Evan, and it was to be our last visit. I was glad to able to play with him once again.

In the days following his death, I was traveling in Japan. I heard Johnny’s music everywhere: in a Tokyo convenience store, there was his sound filling the store; in Osaka, walking into my hotel room, there he was again, on the radio playing his blues, “Main Spring,” from The Congregation. In memoriam, I played his compositions, “When We Were One” and “Hot Sake,” in my performances.

Johnny Griffin’s sense of style attracted attention. The tone of his distinctive speaking voice, a voice that seemed to emanate from a man twice his size, matched his tenor sound, as did his wit-a sensibility of humor mollified by precise facial expressions-that guaranteed a response and, of course, his style of dress: the clothes, hats, glasses, and even his luggage. Griff embodied the quiet elegance of the American and European cultures in which he moved. At once, he was upbeat, current and classic!

Fortunately, for all of us, Johnny Griffin’s recordings will stand as a testament to his dedication, artistry, and singular voice on the tenor saxophone. I will be listening.