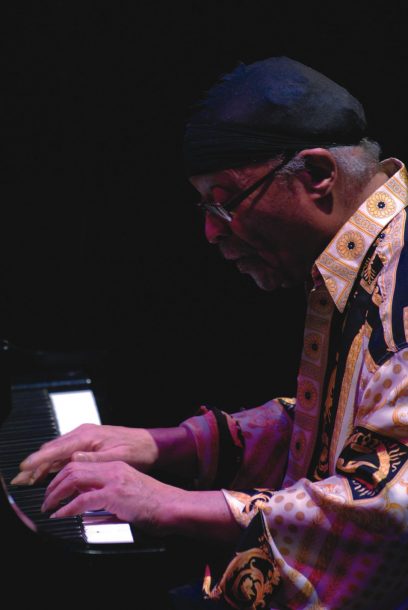 Who woulda thunk it? A downtown renegade and a godfather of the avant-garde together on the same bill…in Wynton’s fabled House of Swing? As John Zorn told the packed house in the magnificent Rose Theater, “Let’s hope this is the beginning of a new trend in programming here. There’s more young faces in this audience than they’ve seen since the inception of this place.”

Indeed, from his fiercely independent, uncompromising musical stance to his camouflage pants, Zorn has come to embody a kind of punk aesthetic in jazz that appeals to a youthful demographic of 20-something males. And like Moses leading the Jews to the Promised Land, Zorn, who has rarely, if ever, performed above 14th Street over the past 30 years, brought his hordes of fresh-faced admirers with him to the prestigious uptown venue for a split bill with a living jazz master. Between these two avant-garde icons, they filled the House of Swing with a joyful atonal noise, eliciting wild ovations from both initiates and converts alike.

While the edgier, more visceral aspects of Zorn’s musicality have been played out in audacious hardcore bands like Spy vs. Spy (with Tim Berne), Naked City (with Bill Frisell) and Painkiller (with Bill Laswell), his Masada quartet (with trumpeter Dave Douglas, bassist Greg Cohen and drummer Joey Baron) is perhaps his most accessible vehicle. Formed in 1993, this remarkably tight, incredibly agile unit seamlessly blends klezmer motifs into the fabric of the avant-garde, the most obvious role model being the classic Ornette Coleman Quartet. And while many of Zorn’s other bands might be defined by densely packed atonal skronking (and there were plenty of those moments in this Masada performance, to be sure), the watchword of this phenomenal quartet is “melody.” As Zorn himself states in the liner notes to Sanhedrin, his most recent Masada release on is own Tzadik label: “From 1973 to 1993 my compositional world was predominantly complex and structural…The traditional concept of melody was not a large part of my creative language. So as a challenge to my compositional skills, in early 1993 I began to write a book of tunes, loosely inspired by the catalogs of great songwriters like Burt Bacharach, Thelonious Monk, Kurt Weill and Ornette Coleman. Simple tunes that could both provide inspiration and act as a formal model for improvisers familiar with negotiating chord changes…and beyond.” To date, Zorn has written 613 tunes for Masada. The pieces performed on this Friday night gala were drawn from the first book of Masada tunes. On Saturday they played tunes from the second book.

Masada’s dynamic set was marked by razor-sharp unison lines and free-flowing counter melodies between Douglas’ trumpet and Zorn’s alto sax (at times reminiscent of the organic, mercurial interplay between Don Cherry and Ornette). Bassist Cohen, a regular member of Coleman’s group over the past few years, is the deep-toned anchor of Masada while Baron, one of the most empathetic and interactive drummers around, maintains a surging undercurrent while also playing melodically on his kit. Together they exhibit a kindred vibe on the bandstand–four remarkable musicians and improvisers who are also, more importantly, extraordinarily keen listeners.

On Masada’s opener, “Karaim,” Baron played with his hands on the cymbals and snare drum, generating a low flame behind Douglas’ brilliant trumpet work, which was marked by a bright, bold tone and a precise attack in the high register. Zorn wove provocatively around Douglas’ crisp trumpet lines, occasionally bursting through with dissonant blasts in the altissimo register before returning to the Middle Eastern-flavored theme to spin seductive lines in unison with Douglas. At his most melodic and swinging, Zorn’s pungent tone recalls hard bopper Sonny Criss. But it’s his sudden and unpredictable bursts of squalling multiphonics and edgy skronking that brand him as a punk and endear him to the younger crowd that regularly hangs out at alternative music havens on the Lower East Side like Tonic or Zorn’s own intimate club, The Stone.

Douglas, a prolific composer and bandleader in his own right, is a remarkably gifted trumpeter. Flaunting unparalleled technical command, he can soar effortlessly into the stratosphere with pristine intonation, nonchalantly dropping in a quote from Eddie Harris’ “Listen Here” before returning to the haunting klezmer theme without dropping a beat. As an alto saxophonist, Zorn straddles an inside-outside aesthetic in Masada, alternating between a whole lexicon of signature extended techniques and more conventional hard boppish blowing. On the frantic “Katzatz,” he unleashed some harsh Marshall Allen-esque overblowing and lots of weird tonguing while summoning up some Spy vs. Spy intensity.

But it’s more of a controlled cacophony with this highly disciplined and vastly entertaining band. Never going for the purely visceral shards of splintered glass approach of a Painkiller, they may flirt with sonic mayhem, only to snap back to form by covering the klezmer-ish themes with skilled aplomb. Zorn may flout convention with his humorous skroniking and wacky eruptions, but inevitably he will show a real connectedness to Dolphy (and therefore Bird) in his facility for blowing over changes, as he did on the Ornette-ish “Katzatz.” Make no mistake, this downtown upstart can play.

The mournful “Kedushah,” with its melancholy harmony lines between trumpet and sax, was an extended bass feature for Cohen while “Beeroth” was a drum feature for Baron, an inventive rhythmatist who has spawned hordes of imitators and emulators intent on pushing the creative envelope on the kit. Alternating between sticks and hands, Joey traveled from toe-tapping grooves to rolling thunder to tricky metric modulation during his extended drum showcase.

On the evocative rubato piece “Ashnah,” Baron alternately played brushes, got ringing overtones on a cymbal and summoned up cuica-like sounds on a tom with his thumb while Zorn played his alto sax with uncommon tenderness. And on the engaging “Sippur,” a loping klezmer boogaloo, Zorn’s solo was imbued with an earthy, bluesy quality as he engaged in some facile exchanges with Douglas.

Masada closed its compact, one-hour set with “Piram,” an uptempo burner fueled by Baron’s combination of explosiveness, uncanny precision and fertile imagination on the kit. Douglas and Zorn united for some Bird-Diz tightness on this intricate stop-time chopsbuster before taking it out with raucous visceral drum rolls and banshee wails.

After a 15-minute intermission to digest all those notes, Cecil Taylor took the stage with his New AHA 3 trio consisting of drummer Pheeroan akLaff and bassist Henry Grimes, who was reunited with the great pianist after a 40-year hiatus (Grimes played on Taylor’s groundbreaking 1966 Blue Note album, Conquistador!).

The 78-year-old avant-garde icon entered to a standing ovation, then stood at his piano reciting cryptic poetry while accompanying himself on shaker. akLaff engaged Cecil with a djembe drum and with fingers on the snare while Grimes picked up a violin, which he bowed with legit technique, if poor intonation. akLaff switched to brushes against the tide of Taylor’s piano playing and as the music built to a more turbulent peak, Grimes discarded the violin, picked up Olive Oyl (his green upright bass, given to him by William Parker) and away they went.

akLaff matched Cecil’s explosively percussive attack on the keyboard with some whirlwind intensity of his own on the kit, heavy on the toms with an overt African influence in his playing. While most drummers over time–including Max Roach and Elvin Jones–have deferred to Cecil’s power, Pheeroan rose to the occasion with thunderous drumming, going toe-to-toe with the master. And while at times his muscular playing on the kit threatened to drown out the piano, Taylor seemed to enjoy the fire that akLaff lit under him throughout this powerhouse high-octane set of music. For sheer bombast, decibel level and visceral appeal, The Bad Plus can’t touch this.

Though akLaff does bring the energy and slamming authority of an explosive fusion drummer to bear on Cecil’s music (think Billy Cobham, Alphonse Mouzon or Tony Williams with Lifetime), he also is a great listener with a remarkable capacity to suit the surroundings. Throughout this volatile set he shaped and enhanced the proceedings with his skillful use of dynamics and an intuitive sense of orchestrating from behind the kit. At one point, he switched to playing strictly cymbals to allow Grimes’ brilliant pizzicato playing to cut through in the mix. At other times, in the midst of particularly rhapsodic passages by Cecil, Pheeroan would underscore the music with sparse mallet work or by playing the drum shells and rims or using sticks on his djembe drum. A sensitive colorist, he leaves holes in the music for gems to shine through.

And more so than other drummers who have worked with Cecil Taylor over the past 40 years, akLaff brings the funk. Rather than being busy on top, his flurries come from the bass drum and work their way up. And he deals more forcefully and effectively with the tom toms than most other Cecil drummers, putting some real meat in the music. A player of almost super-human intensity, he’s an athlete on the drums who also dances behind his kit. And Cecil’s signature two-fisted clusters and ferocious forearm smashes to the keys don’t sound quite so jarring with this kind of bombast underneath it. akLaff makes Cecil’s turbulent music groove. I mean, when was the last time you saw heads bobbing in unison at a Cecil concert?

“Aha” is an exclamation one makes. It’s the sound of discovery. It’s also an apt name for this triumvirate of creative spirits and courageous explorers.