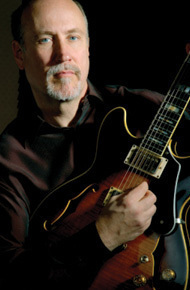 Prediction: At some point in the not-too-distant future, a JazzTimes scribe will bring this CD to a session for a Before & After column and spin a track from it. Whichever unsuspecting musician is charged with identifying the chosen tune, even if he or she has long been familiar with John Scofield’s guitar, won’t come close. Simply put, Scofield has never made a record quite like Piety Street, a gloriously reverent paean to classic black gospel as practiced by such masters as Mahalia Jackson, Thomas A. Dorsey, Dorothy Love Coates and that old favorite, Traditional-with a Hank Williams tune (“Angel of Death”) and one Scofield original tossed in for good measure.

Although Scofield has before demonstrated his affection for those roots sounds-just four years ago he released a tribute album to Ray Charles-those who’ve championed Scofield’s more cerebral innovations over the years may come to Piety Street with a certain amount of wariness, perhaps thinking it a novelty. It’s not, and its honest righteousness and sweet spirit should easily win over all but the most hardheaded. And, of course, the guitar playing-even if it’s often a ringer for B.B. King or Pops Staples-is never less than godly.