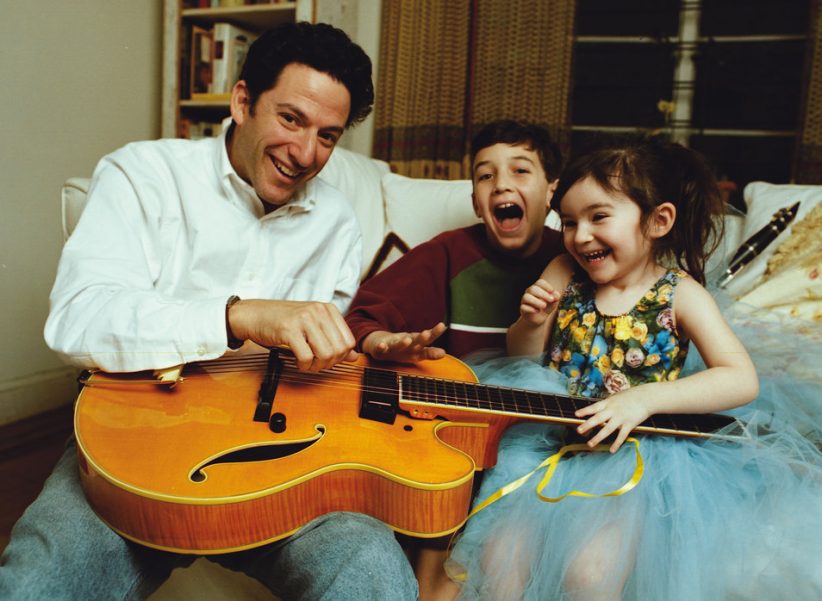 John Pizzarelli at home with his kids

John Pizzarelli has been plying his mellow voice and sweet 7-string guitar in the biz for 20-plus years now, but the still-youthful 42-year-old is becoming best known for a popular TV commercial he cut for Foxwoods Resort and Casino that features him singing “The Wonder of It All.” “It’s very interesting when you walk around New York and people are staring at you weird and you think, ‘Oh, yeah, they’ve seen the commercial but they don’t know it’s me,'” Pizzarelli says.

The New York walks Pizzarelli likes best are taken around his Upper East Side neighborhood. For the past four years Pizzarelli, his vocalist-actress wife Jessica Molaskey and their 4-year-old daughter Madeleine have lived in a combined one bedroom and studio apartment in a six-floor, late-’30s edifice. “Some of the people are still in there from when the building was built,” Pizzarelli says. “Everybody knows everybody so it’s a nice building.”

Pizzarelli’s son, John the fourth, lives around the corner with the guitarist’s first wife. “The thing I like about our neighborhood is that my son can scooter over to my house. We’re right near parks. And there’s a diner on the corner that we always go to for breakfast and they know who we are. It’s really got that idyllic-when you walk down the street you’re always waving at somebody you know.”

It’s a close-knit community, too. “Two weeks after September 11 we had a big benefit for our local firehouse, which lost 8 guys and everybody from the neighborhood did something. We brought the trio and my dad came and my wife, and we all played and sang, and my son was there selling T-shirts.”

Pizzarelli’s musical family also includes bassist brother Martin (who currently plays in John’s trio with pianist Ray Kennedy) and his dad is 7-string maestro “Bucky” Pizzarelli-aka John the second. John the third, however, did not get a spiffy nickname like his pops: “No, and I think it was better that way,” he laughs.

Keeping it all in the family, Molaskey just released her debut CD, Pentimento (PS Classics), a collection of ’20s and ’30s tunes that features Pizzarelli’s trio and father-in-law Bucky. “I met her when we did [the Broadway show] Dream,” John says of Jessica. “I loved the way she sang, and we had a lot in common. She was saying how Wrigley Field was like a church, and I was going “‘Yeeeah, you’re right. Wrigley Field is a chapel of baseball. Wanna go out to dinner?” Pizzarelli says, demonstrating the thicker side of his New Jersey accent with a laugh.

Despite being a New Yorker now, Pizzarelli is a Joisey kid at heart. “My parents live in New Jersey and they live across the street from the house we grew up in. I still maintain that one of these days I’m going to go and buy the house back that I grew up in.”

For now, Pizzarelli is content to live in the City and its sometimes-cramped conditions. This budding Italian chef has a tiny kitchen, but he spends much of his free time there, especially after a long time on the road. “On the second day home I say, ‘Well, today I’m just going to spend time in the kitchen and there’ll be flour and tomatoes all over the place.'”

Pizzarelli’s kids sometimes help him make pasta, but the one who assists him most is the Food Network’s “Molto Mario” Batali. “For Christmas my wife got me on the show. We taped early in the morning; that night we went to his restaurant, Babbo, and he came out to the table and said, ‘How ya doin’?’ It was like meeting Zoot Sims; he was really cool.”

Pizzarelli’s latest CDs are The Rare Delight of You (Telarc) with George Shearing and Twogether (Victoria) with Bucky. A live CD, cut at Foxwoods as a promo item for casino patrons, should see wide release by the end of the year on Telarc.

“I follow anything were there’s movement,” he says, before admitting he’s a Knicks, Rangers, Giants and, err, Red Sox fan. “Over the years I’ve switched to the Red Sox [from the Yankees] but that’s a long story. Last year I took my son up to Fenway on Patriot’s Day; we flew up in the morning-it was a big credit-card day-and we had a lot of fun.”

Brioni suits. “I wear their suits in concert. That came about through Dreams. They did the formal wear for one of the scenes-everyone wore Brioni tuxedos. I think they’re great suits, plus they go good with the music.”

“I’m not even a phile. We probably do most of our listening in the car. As a matter of fact, my last car ride I listened to side one of Frampton Comes Alive so it shows you where I’m at.”

“I have a pretty good Gateway computer. The best thing I did when I bought it was I got a flat screen. Then I got a Gateway laptop, which I got last year for a tour I did.”

“The last nonanimated movie I saw was Ordinary People,” the busy father jokes.