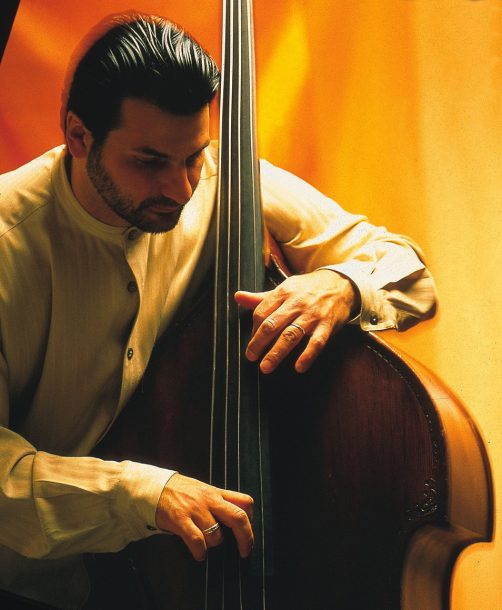 John Patitucci has gone through a number of personal transformations since moving back to his native New York in 1996 following a longtime residency in Los Angeles. The first transformation was his weight. Shortly after returning to the East Coast, the Brooklyn-born bass player put on about 25 pounds from indulging in all his favorite fatty foods that weren’t readily available on the West Coast (i.e., New York style pizza and calzones, New York style cheesecake and cannolis, New York style bagels and knishes, ad infinitum). The second major transformation was becoming a Daddy 18 months ago, a situation that has left him spending roughly as much time listening to the music of Barney and Teletubbies as John Coltrane and Samuel Barber. Thirdly, he has experienced a continued loosening up of his musical aesthetic, embracing a sparser, more fundamental approach to the bass as he engages in more freewheeling conversations with musicians on the Big Apple scene. The result of having played over the past couple of years with veteran East Coast drummers like Jack DeJohnette, Paul Motian, Bill Stewart, Jeff ‘Tain’ Watts, and Terri Lyne Carrington is that these days Patitucci sounds closer in spirit to Paul Chambers or Charlie Haden than the fleet-fingered phenom who burst onto the scene in 1985 with Chick Corea’s Elektric Band.

That less-is-more, slyly syncopated aesthetic can be heard on Now, his second project for Concord Records and by far the most dynamic of his nine albums as a leader. With Stewart on drums and with John Scofield, Chris Potter, and Michael Brecker cast in featured roles, Patitucci lays into the music with a deepened sense of maturity, adopting an almost subliminal bottom end presence on original compositions like “Grace,” “Out of the Mouths of Babes,” the haunting ballads “Hope” and “Forgotten but Not Gone” and the lazy N’awlins crawl “Labor Day.” Even when he picks up his 6-string electric bass, as on his gentle and lyrical rendition of McCoy Tyner’s ballad “Search for Peace” or his highly interactive duet with Stewart on Coltrane’s “Giant Steps,” there’s a newfound sense of restraint and relaxation in his playing. You can hear him breathing now, phrasing in more soulful and organic ways than ever before. It’s a far cry from the relentlessly fluid, horn-like chops grandstanding of his self-titled debut on GRP a decade ago. It may well have something to do with returning to New York. Or it might have everything to do with approaching 40.