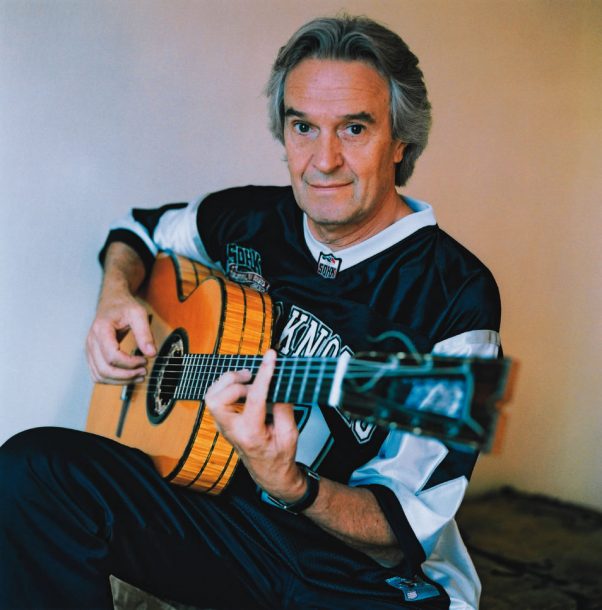 It had been 10 years since McLaughlin played a bona fide fusion gig in New York, going back to a 1997 engagement with his The Heart Of Things band (Dennis Chambers on drums, Matthew Garrison on electric bass, Jim Beard on keyboards and Gary Thomas on tenor and soprano saxophones). More recently, he had made appearances in the Big Apple with his South Indian influenced acoustic ensemble Remember Shakti. But this gig was being billed as a return to the electric burn. And indeed it was.

The once and future guitar hero-now 65, sporting a shock of white hair and the “look of eagles” in his eyes, like a well-coiffed, Monaco version of Gandalf the White from Lord of the Rings-came out wailing with his solidbody Godin guitar set on stun. And his 4th Dimension band (Gary Husband on keyboards, Mark Mondesir on drums and the 23-year-old French phenom Hadrien Feraud on bass) provided just as many soloistic thrills as the fabled guitar slinger himself.

Through a sizzling set that included brand new material along with rearranged pieces from past albums-“Hijacked” from 1992’s Que Alegria, “Mother Tongues” from 1990’s Live at the Royal Festival Hall, “Nostalgia” from 1984’s Mahavishnu, “The Unknown Dissident” from 1978’s Electric Dreams along with a radical reinterpretation of Miles Davis’ 1980s anthem, “Jean Pierre”-McLaughlin unleashed his staggering six-string facility with reckless abandon. And rather than softening his sound with an unfortunate tendency toward excessive reverb, as he had done with the Free Spirits band in the ’90s, McLaughlin came out with a stinging attack that recalled his more aggressive, overtly cathartic electric playing from the ’70s, eliciting wild cheers from the packed house at Town Hall.

On the powerful opener, “Raju,” McLaughlin immediately revealed his newfound fondness for whammy bar articulations, a kind of outgrowth of some of his non-tempered playing in the context of Remember Shakti. Husband, who is more well known as a drummer from his various tours and recordings over the past 20 years with the likes of Allan Holdsworth, Andy Summers, Jack Bruce and the popular U.K. group Level 42, distinguished himself as a first-rate keyboardist on this opening number, shifting deftly from Fender Rhodes comping to adventurous synth soloing. And Mondesir, who had played on McLaughlin’s 1996 recording The Promise as well as on last year’s Industrial Zen, fueled the proceedings with his power-precision drumming.

But it was the dazzling young discovery Feraud, whom McLaughlin himself had dubbed “the new Jaco,” who really stunned this crowd with his blazing chops on this volatile opener. Throughout his extended Mu-Tron-inflected solo here-a Bootsy Collins sound with Jaco Pastorius technique-the bassist combined uncanny speed and horn-like facility while seeming to gain energy and ideas as he forged ahead. And the fusion-friendly crowd roared its approval of his virtuosic approach.

Husband’s arrangement of “Jean Pierre” was far darker than Miles’ buoyant reading of the tune, incorporating adventurous tones and odd-timbre dissonance from the synths along with noisey skronking and squealing harmonics from McLaughlin’s guitar. The keyboardist’s harmonically out solo with a convincing grand piano sound on his synth was a highlight of this reconfigured piece from latter-day Miles. Husband’s timbral choices on the synth throughout the set were always thoughtfully creative and refreshing while his virtuosic right hand single-note facility allowed him to stand toe-to-toe with McLaughlin on intricate unison lines and heated exchanges. And on a couple of occasions he hopped from his arsenal of keyboards to an adjacent standup drum setup to engage in some intensely slamming call-and-response statements with drummer Mondesir (though hobbled by two painful herniated lumber disks in his back).

Even on gentle numbers like “Maharina” and “Nostalgia,” the latter which he had formerly played with a fluffy flute patch on his Synclavier guitar synth, McLaughlin machine gun-picked his way through his solos with a vengeance, his fiery axe dipped in grungy tones reminiscent of Carlos Santana’s distortion-laced signature. Elsewhere, the boy wonder Feraud turned in a monstrous solo on the rhythmically charged, pyrotechnic fusion number “Hijacked,” then carried the soulful melody on McLaughlin’s relaxed, gospel-tinged ballad “Unknown Dissident,” another vehicle for the guitarist’s unparalleled ferocity on the instrument.

They ended the set with an extended workout on “Mother Tongues” which featured a tremendous drum solo by Mondesir and they encored with a peaceful rendition of the Pharoah Sanders hymn “Light at the End of the World,” which offered a much-needed breath after the deluge of so many intense notes.

Bottom line for fusion enthusiasts: McLaughlin is back, and this time he’s pulling no punches.