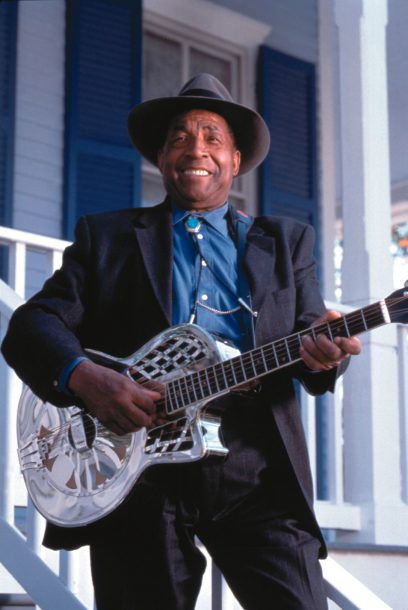 Being 75 years old has not slowed John Jackson down one bit. The ebullient troubadour and Piedmont style picker has been hitting the touring trail hard following the release of Front Porch Blues on Alligator Records. It’s a delightful collection of ballads and blues sung in the gentle, appealing manner that has been Jackson’s trademark since the ’60s. Talking on the phone to the first generation country bluesman from his home in Virginia Falls, Virginia, it quickly becomes apparent that his warm and engaging singing style is simply an extension of his genuinely friendly and mellifluous speaking voice.

“Yes sir, I’m real glad to be with this company,” he says of his recent signing to Alligator, though it’s obvious that Jackson would undoubtedly be singing and playing every day regardless of any record company affiliation. It’s been second nature to him since 1932 when, at age eight, he began playing weekend parties with his parents around Rappahanock County, Virginia.

“Yes sir,” he beams over the phone, running down his recent itinerary, “I just got back from the Pete Seeger Festival in New York, the Chicago Blues Festival, coffeehouses and clubs in New Jersey, Tucson, Seattle….Lord, just so many different places.” And the response has been enthusiastic everywhere he goes.

Jackson’s storybook entry into the business is the stuff that movies are made of. Although he had been playing just for fun through the ’40s and ’50s while also working as a cook, butler, chauffeur, caretaker and gravedigger to support his family, he was “discovered” one day while giving guitar lessons at a local gas station. Serendipity struck when Chuck Perdue, president of the Folklore Society of Greater Washington D.C., pulled up to the pump for some gas, overheard John playing and instantly knew that he had stumbled onto a true original. Within weeks, he was the toast of the D.C. coffeehouse circuit. In April of 1965 Jackson recorded his first record, Blues and Country Dance Songs From Virginia (newly issued on CD) for the Arhoolie label. And he’s still going strong in that same easy rolling Piedmont vein with Front Porch Blues.