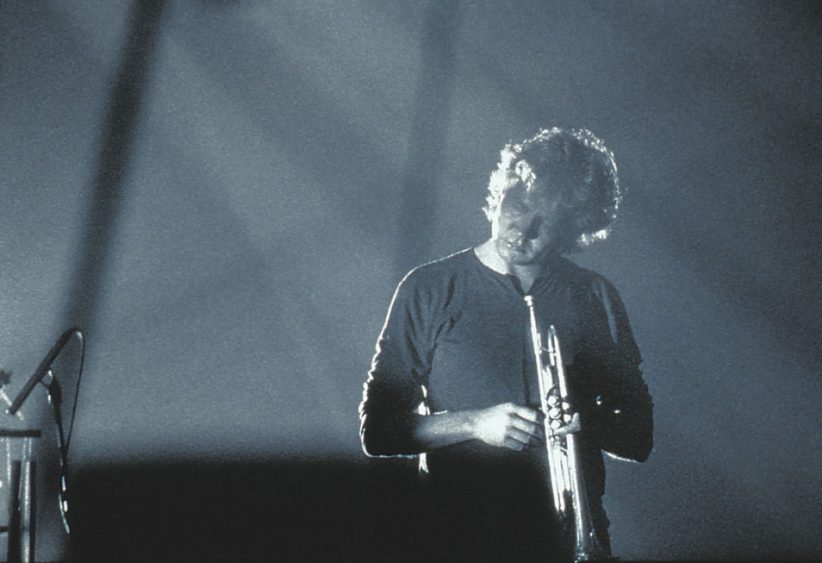 Jazz musicians playing over a dance beat is, of course, not new at all. Jazz musicians incorporating modern electronic music into their sound isn’t really new either. Every couple of years it seems, some poor jazz player (trumpet players being far more likely-thanks Miles) shuffles out of his/her comfort aesthetic and takes a stab at blending jazz and modern dance music. Far more often then not, it sparks and fades-that’s if it sparks at all-and surely it has something to do with players used to shifting or nuanced rhythms sidling up to the unbending, monolithic thud of the dance beat. Lots of players fight it, try to shout it out, cover it up with brazen, outsized playing. Doesn’t work. Can’t be done. The beats are just too big and too stupid.

In concert at the Kennedy Center, the impressively calm and centered Norweigan trumpeter Nils Petter Molvaer demonstrated his alternate method. Molvaer and his band give up on making this a jazz music and opt to let the beat have it’s way. If you are going to play dance music, his music suggested, you are going to have to find and exploit the space between the beats.

To that end, Molvaer constantly underexposed himself. He had two microphones set up at the front of the stage, one that amplified his trumpet with a touch of reverb and another that rendered the tone of his trumpet virtually unrecognizable. More often then not, he played into the second one, darting in and out of the beat and embedding his melodies in the near constant dance track thud. He saved his unfiltered trumpet sound-breathy and ancient sounding-for only a few occasions, and when he played, it left listeners aching for more.

Keyboardist Morten Qvenild and drummer Rune Arnesen followed Molvaer’s lead. In some of the most beautiful moments of the night, the beat dried up as Qvenild draped spare, almost hymnlike chords beneath Molvaer’s trumpet. A little more of that would have gone a long way. But in large part, Qvenild’s contributions blended with the band’s massive sound. Arnesen, in the unenviable position of playing alongside DJ Strangefruit and Jan Bang’s foregrounded rhythm, proved remarkably able. The drummer found all sorts of opportunity for smaller accents anticipating or tailing the beat.

There were practically no concessions to the concert hall environment. In other words, the band treated the gig like a club date, complete with filtered, spinning lights and trippy, abstract visuals projected behind the musicians. They also seemed oddly concerned about keeping the beat moving, despite the fact that there were no dancers. And they did keep a heavy, heavy beat on course-except, that is, for the few times when Molvaer got caught up in laptop fidgeting. A concert hall full of people staring at a man bent at the waist and staring into a computer screen does not make for good entertainment, but that seems to be a concert-going hazard these days.

A few technical difficulty lulls and the unfortunate and awkward addition of rapper Terence Nicholson at the end of the set were the only dead spots in an otherwise strong concert. If only Nicholson were a software designer, the concert would have been solid.