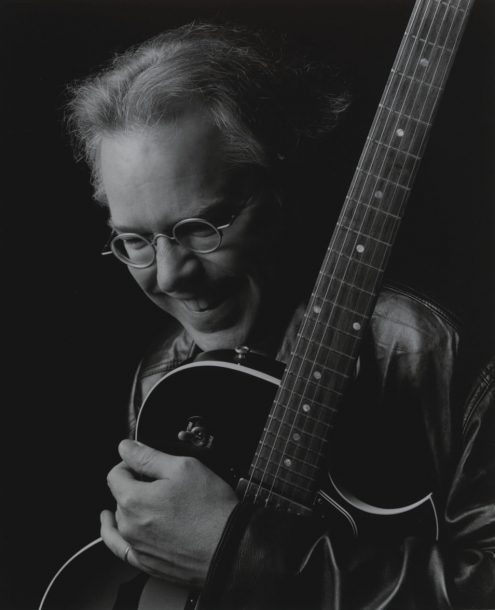 Things began tentatively, as Frisell wandered through a catalogue of quiet harmonic effects. Gradually, a ghostly ostinato emerged from the void, to which Blade added the dark hues of a ride cymbal. Not quite a song but not exactly free, the almost-groove ended abruptly, with the turn of a knob, and segued into Thelonious Monk’s “Misterioso,” a favorite standard of Frisell’s. Even this, though, was an ethereal offering. Despite a loping four-on-the-floor swing feel, the musicians only pecked at their instruments. Yahel in particular sounded unsure, as if he were distracted by another song in the distance.

What may have seemed an unpromising start was actually just a band finding its bearings. Sometime during the second number-a spooky, Moroccan-tinged four-note vamp-Yahel and Blade began to evoke Larry Young and Elvin Jones, but with the accents of a modern language. The harmonic stasis and melodic redundancy of the song actually inspired deeper inventiveness from Frisell. This was the case, too, with the following tune, a take on Lucinda Williams’ “Ventura.” As the evening’s first trace of Americana, the song provided a kind of natural habitat for Frisell. But rather than adhere to the source material, the guitarist worried Williams’ haunting chorus over and over again. Obsessive in its repetition, this version gradually transformed the quietly aching ballad into a radiating field of sound-producing a naked emotional resonance of the sort rarely found in jazz clubs.

Still, the catharsis wasn’t over. Frisell and crew closed their first set with a bluesy dirge of epic proportions. With a polyrhythmic swing feel in 9/4 time, the song was a showcase for Blade, who slashed at his cymbals and toms with mighty fury. This goaded Frisell into an improvisational space loaded with aggressive energy and jagged distortion; at one point he even dove into a declension of the signature phrase of “A Love Supreme.” He ended his solo with a head-spinning reverse effect-George Harrison meets Sonny Sharrock – and finally steered the song toward its destination. It was only at this moment that the theme revealed itself as Bob Dylan’s “Masters of War,” a tone poem whose strident message justified the intensity of the rendition. On this, the eve of the anniversary of George Bush’s victory speech aboard the U.S.S. Abraham Lincoln, it seemed likely that Frisell was making an unspoken but unmistakable statement. Only the house lights could stop the applause.

If the first set shifted gradually from rapture to rage, the second started with easy flair and moved toward mastery. Frisell’s abstract benediction was lengthier but also more coherent, and his bandmates didn’t hesitate before joining in the clangor. And the tune that finally emerged, Frisell’s “Boubacar,” was more elastic here than on disc: Imagine the Ennio Morricone soundtrack to a spaghetti western, as sampled by Quentin Tarantino for Kill Bill. At times Blade and Yahel even slipped into a reggae groove, bringing the worldliness to Frisell’s world-music confection.

With the second tune the band romped over well-trod territory: “I Got Rhythm.” Here, for maybe the first time in the night, Yahel and Blade sparked memories of bygone sessions at Smalls: Their groove was some forward-tumbling, hard-swinging stuff. Frisell, entering this fray, sounded more bop-oriented than usual, his lines snaking playfully through the tune. Together with Yahel, he occasionally dropped a reference to Sonny Rollins’ “No Moe,” a sly rhythm-changes head that Frisell had recorded with a previous trio over a decade ago.

That group, with bassist Kermit Driscoll and drummer Joey Baron, was a study in mercurial mutations. This one is no less elastic, but deals even more effectively in the currency of crescendo. The substitution in instrumentation – B-3 organ for bass, and Blade for the buoyant but less supple Baron – has something to do with this. But Frisell has also evolved as a musician over the past decade, his angular tendencies smoothing out into more subtle forms of experimentation. What’s most striking about this new group is that it actually bears less resemblance to Frisell’s other working trios: one comprised of drummer Kenny Wollesen and bassist Tony Scherr, and the other consisting of Wollesen and bassist Viktor Krauss. Both of those bands will soon be featured on a live two-volume CD. It’s anyone’s guess whether Nonesuch Records has similar designs for Frisell-Yahel-Blade, a grouping that, after all, may be more of a bold experiment than a new direction. But if the Jazz Standard gig serves as any barometer, there are great depths yet untapped by this ensemble – depths best illustrated by the lyrics of the Lucinda Williams song they played. “I want to watch the ocean bend / The edges of the sun, then / I want to get swallowed up / In an ocean of love.”