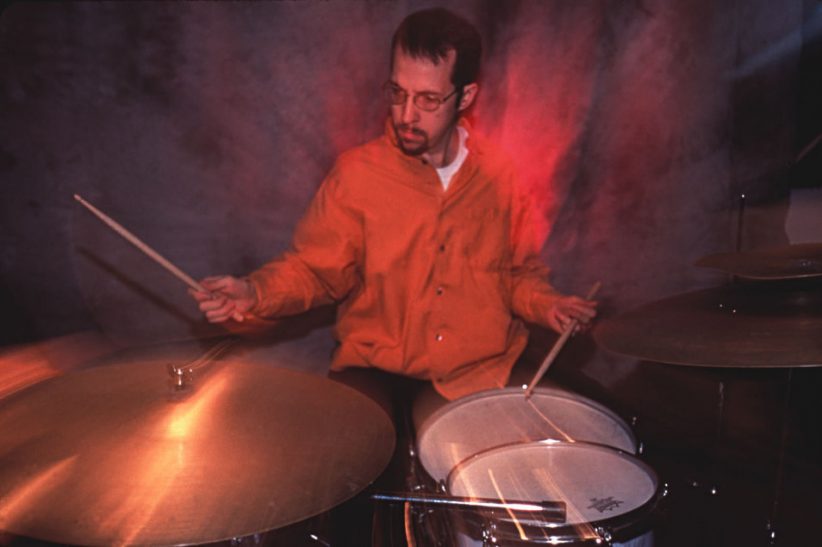 “At the time that I formed these groups, I was a lonely guy,” he smiles. “I guess I took ‘music is my mistress’ literally.”

The Mary-Noelle Trio-named after a Knitting Factory employee who helped book the club; Hollenbeck ain’t dumb-is dormant, but the Claudia Quintet and Quartet Lucy follow their very active leader. Along with the recent No Images CD, listed under his own name, Hollenbeck has two new releases under his other group names. All three CDs are on BlueShift, the new jazz imprint of Composers Recordings Inc. (CRI).

The female name game is to help listeners discern among Hollenbeck’s diverse groups, but there’s also an aesthetic reason for the handles.

“I wanted to project a feminine quality onto these groups,” he says, “to help remind myself that this is a quality that I want to always be present. I guess this was reaction to what I see as a male-dominated style. For me, it has not always been a positive tendency.”

And, he says, “I was trying to stay away from John Hollenbeck’s Dead Pig on the Run type of group name popular with the Knitting Factory crowd.”

The intelligent, sensitive sounds that Hollenbeck creates with his “girly” groups wouldn’t be able to survive under the weight of a name like Dead Pig on the Run-though the multitalented drummer with catholic tastes could probably create music that would.

Hollenbeck, 33, graduated from Eastman School of Music with a bachelor’s in percussion and a master’s in jazz composition in 1991, and he’s spent many of his postgrad studies with big bands led by Bob Brookmeyer as well as the BMI/New York Jazz Orchestra and Workshop and subbing for the Vanguard Jazz Orchestra and Maria Schneider’s big band. But he’s also played with new-music composer Meredith Monk, trumpeter Cuong Vu in his electrified trio, vibist Matt Moran’s Sideshow (whose debut on CRI, Sideshow: Songs of Charles Ives, was an elegant sleeper from last year) and more than a dozen other wide-ranging groups.

The apparent ease with which Hollenbeck moves among polymetrics and polytones as well as various genres, bands and disciplines is impressive, and his unique style of accessible but willful eclecticism is evident on his debut trio of CDs.

More appealing are the small-group CDs by the Claudia Quintet and Quartet Lucy. The latter is filled with gorgeous, ECM-inspired modern chamber jazz, and it features the percussionist with the dreamy, often wordless tenor singing of Theo Bleckmann, Dan Willis’ English horn, saxes and flute and, alternately holding down the low end, electric bassist Skuli Sverrisson or cellist Jonas Tauber. The Claudia Quintet-Hollenbeck, bassist Drew Gress, vibist Matt Moran, accordionist Ted Reichman and reedist Chris Speed-picks up the pace on its CD, with the dubby “Thursday 3:44 p.m. (Playground)” and the drum-‘n’-bass-inspired “Meinetwegen.”

“I grew up making my own compilation tapes,” Hollenbeck says to explain his diverse tastes. “I love variety. I have always loved almost all types of music-so these influences come out naturally, from years of absorption.”

Like a growing number of musicians in their 20s and 30s, Hollenbeck has been inspired by the rhythms and tonalities of electronica, though he translates them to acoustic instruments for a more lively and organic vibe. “Right now, I’m very excited by some drum ‘n’ bass and ambient music. It tickles my ears. I like it soft-playing it gives me the same feelings that I got when I first got into bebop. When I’m listening to this new stuff I often find it exciting and soothing at the same time-fast-moving rhythms and slow-moving harmonies-that’s my bread and butter.”

The Claudia Quintet and its ethereal, suspended, organic music grew out of a yearlong Monday night residency that Hollenbeck, Reichman, bassist Reuben Radding and, later, Moran, had in the East Village at the now-defunct Alt.Coffee (whose owners went on to open Tonic, the NYC alt-jazz hot spot). The band, then known as the Refusniks, created a buzz that got the Downtown scene to notice. “Having a place to allow the music to grow-this is definitely an element that is mostly missing now from the jazz scene, compared to the ’30s to the ’60s,” Hollenbeck says. “After getting a taste of it, I have realized its importance in the development of jazz.”