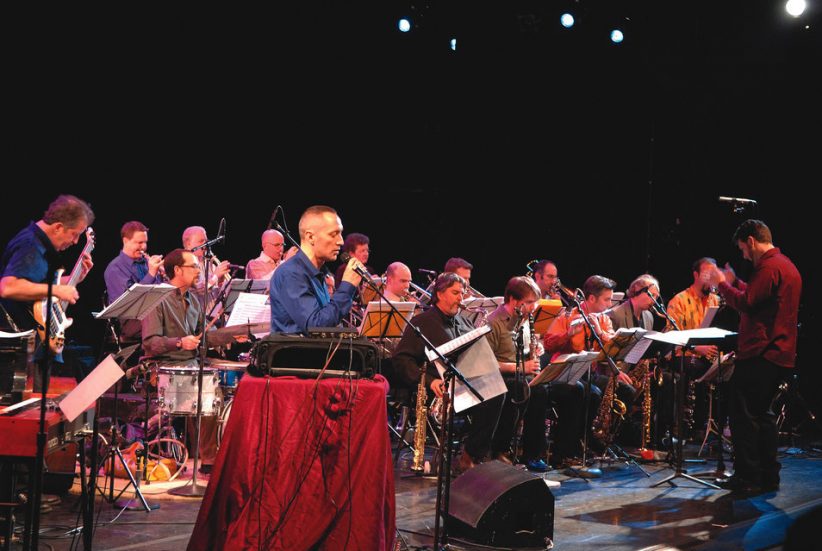 John Hollenbeck in Philadelphia during his "Big Ears" residency, 2009

Gongs ring out, loud and long, followed by the boom of timpani and the sparse rattle of percussion. Then, from the rear of Philadelphia’s Painted Bride Art Center, out of view, several horns begin an achingly dissonant rubato theme. Soon the players emerge from the darkness, continuing the music as they march slowly through the black-box theater, finally joining the half-dozen musicians already onstage. John Hollenbeck, switching from melodica to drum set, kicks off a driving beat as the players fall into tempo, adding to a powerful unison line that crests and then draws to a conclusive finish. The piece, “Paterna Terra” (“fatherland”), is a journey in itself. But it’s just the first of Hollenbeck’s offerings with a band he has dubbed the “Philly 12.”

The idea behind “Big Ears” was simple: throw Hollenbeck, one of New York’s leading lights, together with a group of Philly-based artists he doesn’t know and then see what happens. If the effort helped shed light on the vital yet underexposed creative music scene in Philadelphia, all the better. “I tried not to have any expectations, and I didn’t want anyone else to have expectations,” Hollenbeck says. Nonetheless, there were certain goals in mind.

First, the drummer spent a week in January with the Philly 12, workshopping ideas, doing rhythmic exercises and getting acquainted musically. Then the Bride hosted Hollenbeck’s Grammy-nominated Large Ensemble in a bravura performance on Feb. 28, followed by a second week of residency with the Philly 12. By this point, the workshops evolved into rehearsals. Hollenbeck brought in written music-older repurposed material as well as brand new-and started devising a concert program.

“This was probably the most differing group of improvisers I’ve ever been in one room with, including school,” said Hernandez, whose work involves in-depth study of microtonality. But according to Zankel, who has played with everyone from Hank Mobley and Jymie Merritt to Cecil Taylor, “The commonalities were hugely greater than the differences.” Indeed, some of the Philly 12 already had strong bonds as members of Zankel’s Warriors of the Wonderful Sound, Davis’ Aerial Photograph and other groups on the cutting edge of the Philly scene.

Hollenbeck was assertive in the leader’s role, keeping the music free and loose even as he focused carefully on dynamics, articulation and stagecraft. In several pieces, one heard a latticework of overlapping rhythms, set against richly harmonized melodic clauses often unrelated to the main tempo. The bit-by-bit rhythmic consensus-building of the residency had borne fruit.

“Forced Empathy,” a frenetic repeating theme with improvised breaks, contained within it a slow conducted interlude called “Getting Chilly.” Santí handled spoken-word parts with poise on “The Bird With the Coppery, Keen Claws” (based on verse by Wallace Stevens). Later, she cued the horns through the crosscutting melodic bursts of the finale, “Jazz Envy.” Four players gathered in front for “Domino,” a stark experimental piece involving open call-and-response segments and a choreographed round robin of solos. As the four exited in a line, the remaining players struck up “Saudade,” a flowing modern-jazz tune with eloquent solos from White, Rogers and Davis.

“You have to find a place where everyone can be included,” Hollenbeck said on a rehearsal break. “I wanted people to be comfortable, but I also wanted moments of, ‘God, I’ve never done this before, I have no idea what I’m doing.'” The trick was to render those moments all but undetectable, to merge comfort and discomfort in the arc of a compelling performance.

Rogers and Miltenberger stoked the fires again when “Drum Conversation,” Hollenbeck’s detailed orchestration of a 1953 Max Roach solo, exploded from mid-tempo to double-time swing. “Tarak,” a serene drone-based piece with a voiceover by 7-year-old Tarak McLain (from National Public Radio’s “This I Believe” series), changed the pace dramatically. But the voice sequencing from Mitchell’s laptop, and another dramatic procession around the room, didn’t sync up as smoothly as intended, one of a few ambitious technical details that made the show run long.

“John’s compositions have a modular element to them,” offered Hernandez at a post-gig reception. “They have these moveable pieces that allow this or that much space between sections. It’s like motivic tone painting, which was a really interesting thing to interact with and think about.”

Reflecting on the whole experience, Zankel said, “If I had to describe John in two words-and this is a point where I feel a real kinship with him-he’s a ‘melody man.’ For all he knows about rhythm and tonality and orchestration, I think the bottom line for him is melody, and that’s a profound approach to music.”