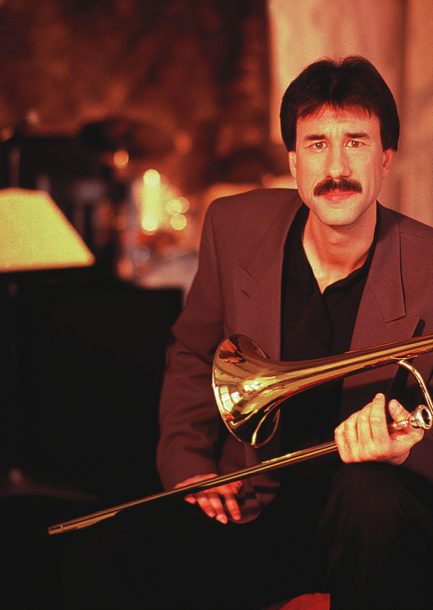 Trombonist, composer and big band leader John Fedchock has a mission. Half a century ago, he explains, “the two biggest stars in the music industry were trombone players with big bands [Tommy Dorsey and Glenn Miller].

After that, the trombone player was dropped from the front line. I’d like to keep the instrument out there because today, a lot of people don’t get a chance to hear it that often. By surrounding myself with 15 other instruments, I feel I can help bring the trombone back to the forefront.”

A key soloist and arranger for Woody Herman for seven years in the 1980s who has also worked with Gerry Mulligan, Louie Bellson and the Carnegie Hall Jazz Band, Fedchock’s reputation has been on the rise ever since he formed his own big band in 1989. Their second release, On The Edge, on Reservoir Music, features his evocative writing and smooth, agile trombone.

“My concept is a modernist’s view of the traditional big band sound,” he explains. “My voicings are thicker and denser than your traditional big band would be. And all my charts are centered around the soloists although there is plenty of ensemble writing. The greatest thing about a big band itself is hearing the sound of the ensemble. I really make a point in my writing to create space for the ensemble to develop in sections. That way, the ensemble can get a good chunk of playing time and add to the development of a piece.”

“At the same time,” he adds, “the charts are structured so that solo sections can be opened up for the soloists to really stretch out. Normally, in a big band chart, soloists have 16 or maybe 32 bars in arrangement but in my band, they get more time. What I’m trying to do is keep everybody happy!”