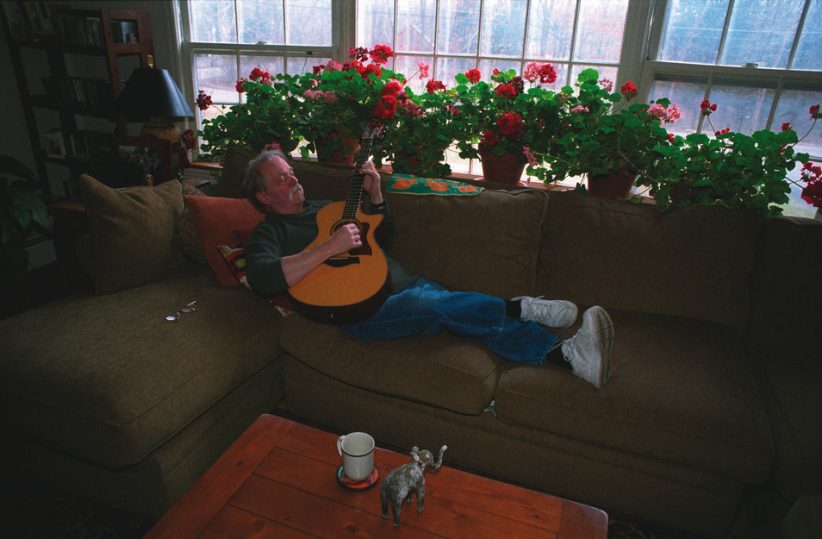 John Abercrombie had spent time Pearl Harbor Day in 2003 digging his car out after one of the heavier snows that hit the hilly area where he lives, about 35 miles north of New York City, when he decided to pause from his labors and go inside. That’s when he smelled smoke.

“From where I was, I didn’t see any smoke or anything. When I walked into the kitchen entrance to the house, I saw that the smoke was halfway from the ceiling to the floor. I said, ‘This wasn’t an egg I left on the burner, something’s going on here.’ I walked further into the house and I saw the smoke was everywhere.”

His wife, Lisa, who was in the bath, noticed the smoke at the same time and ran out of the house, in her own words, “buck naked.”

Abercrombie went back into the burning structure, he said, hoping to grab some instruments, but more importantly to find their cat.

“But I couldn’t find the cat, and all of a sudden I saw flames, besides the smoke,” he recalled. The flames started shooting over my head. So I said, ‘I think this might be a time to leave the establishment and get the hell out of here.'”

Fire crews arrived in time to make sure they were safe, but too late to save the structure. Their Putnam Valley, N.Y. home was totally destroyed.

“I went back to the house the next day with my friend Bob and we took flashlights to look around, to see if we could find any cat remains and just to see what happened. It was really awful,” he said. “The firemen had put all my guitars out in the front yard, what was left of them, under the tree. It looked like a Picasso; they were all melted.

“The guitars were the thing I thought about the least, in a way,” he said. “Actually, one of them made it through: an old Les Paul, which maybe goes to show you how strong Les Paul guitars are. These things are built like Buicks. That one they had gotten out of the house and it was in a hard case. A lot of them I leave out on stands, so those were all like firewood. They went up instantly. A couple of guitars weren’t in the house. One was in the shop being repaired, one was with a friend who was considering buying it. And I had a couple of little electric mandolins that were in the garage. They weren’t touched because the fire didn’t take the garage.”

Later, authorities determined that it was an electrical fire, Abercrombie said. “It started in my attic, which I didn’t even go into. I didn’t know what was in my attic.”

After losing their home of only six months, the couple settled into temporary digs at the nearby Peekskill Motor Inn while they waited for the insurance settlement. That period showed Abercrombie how many friends he had.

Before the insurance company kicked into action, bassist Todd Coolman took up a collection where Abercrombie taught, at the State University of New York-Purchase. Abercrombie said Coolman showed up in the hotel lobby one day with a bag filled with several thousand dollars in checks and cash, and with notes of encouragement.

“This guitar company that I endorse, Brian Moore Guitars, they called me up, and the guy actually showed up at my hotel and said, ‘I’m going to take you out to dinner and give you a guitar. He gave me one of the Korean models and then he said, ‘We’re making you another guitar, starting tomorrow,'” Abercrombie said.

As the days went on, Abercrombie said, “I started getting phone calls from people offering me instruments. Pat Metheny called and said I could have anything I wanted. I should have said, ‘How about giving me a couple of million dollars?’

“The interesting thing was the guitars didn’t upset me that much,” he said. “Because I knew that they’re pieces of wood with strings on them and I would eventually have guitars that I wanted to play. This wasn’t going to stop me from playing, not having a guitar.

“I was just getting over the trauma of the whole thing. I think I was more concerned about what had happened to the cat and that we were ensconced in this Peekskill Motor Inn. It had a beautiful view overlooking the [Hudson] river and they had a wonderful bar. I made really good use of the bar. They had single-malt whiskeys, fish and chips and English ale.”

Before the final settlement, the insurance company allowed them to rent a rural house on 65 acres whose owner kept horses on the property. “I really felt I was on the Ponderosa. It was this gorgeous setting,” Abercrombie said.

They eventually purchased their current home, a ranch house on a wooded lot also in Putnam Valley, near Bear Mountain, N.Y. The home features a fireplace on the main floor, a deck above the backyard and a modest above-ground pool off to one side. There’s a spacious music practice room downstairs for Abercrombie’s instruments. It’s the kind of place that can be a comfortable retreat in the summer as well as cozy on cold winter nights.

To the uninitiated it may seem like a schlep to get to New York City from where Abercrombie resides, but, “If you know how to go, you can get to Manhattan in about an hour and 10, 15,” he said. “In midday, I can actually get into upper Manhattan in 50 minutes. It’s closer than it seems.”

Abercrombie had given up his 18th Street loft in Manhattan to move “upstate” (a misnomer to all but those living in New York City, who consider anything north of Gotham “the country”) about 10 years ago. Their first upstate move was to a rented house near John Scofield’s home, just to see if they liked the idea of being away from the city, Abercrombie said.

Having lived in the city for a long time, Abercrombie had one minor problem: He hadn’t driven in years and his license had lapsed. Scofield’s wife also had had the same problem, so she was instrumental in helping Abercrombie find a driving instructor so he could brush up and get his license. Scofield helped too.

“Sco took me one day, he said, ‘Come out to the parking lot with me. Get behind the wheel.’ I said, ‘OK. You’ve got to be crazy. This is your car.’ He got me comfortable with the idea again. Then I took lessons and I learned to drive again in Manhattan, which, of all places, is pretty off-the-wall. But it came back pretty soon.”

When going through the wreckage, Abercrombie found some items that, although severely damaged by the fire, he had to keep. One was a photo album that included some of the couple’s earliest pictures together, as well as shots of friends. “That was pretty charred up, but I refused to let it go,” he said.

Also among the losses from the fire were some teddy bears from a collection John and Lisa had started years earlier, when she sent him a musical bear. But one charred and torn member of that collection was still recognizable, so, “We actually took it some place and had a woman stitch it for us. … This thing survived the fire. My little mandolins survived the fire. We were all survivors.”

“I’ve always been a big fan of mystery novels, so I’ve read everything from [Sir Arthur] Conan Doyle to new guys like Jonathan Kellerman and Jeffery Deaver,” Abercrombie said. Paul Auster and Michael Crichton are also among his favorites list. “I like to read good authors like that. I used to like to read Truman Capote.”

“I find the computer something that’s necessary. I have a real cheap eMac. I only use it for what I have to use it for: communicating about gigs. I’m not really into it. I don’t use it for music. I still do music the old-fashioned way: I sit down at the piano or at the guitar. If I get ideas, I write them down with pencil and paper. I don’t even use a tape recorder. I used to use a little cassette just to record ideas. But I don’t even do that now.”

“I like Italian food and French wine. I went through a phase where I thought French food was fantastic and every time I’d get extra money I’d go to an expensive French restaurant.”

“Hot dogs. Nathan’s hot dogs. With mustard and sauerkraut. That I can find up here. There’s a Nathan’s not too far away.”

Al, the white family cat. His name is short for Albino. “He brought another cat in today. I’m sitting here on the telephone and all of a sudden I saw a gray-and-white cat walk across my living room. I said, ‘That’s not Al.’ Then I saw Al right behind him,” Abercrombie said. “He’s a hunter, too. He brings little gifts in from time to time.”

As far as clubs go, “Birdland I find to be a very enjoyable club because they treat you nice. It usually gets a pretty good audience, and I like the sound in there. That and the Jazz Standard are the two clubs in New York that I feel most comfortable in.”

Abercrombie’s wife, Lisa, gave him a plush bear many years ago, which became the start of a collection. “So occasionally I would take a small travel bear, I guess it would be a pocket bear.”

At about the same time he learned how to drive and moved up to the country, Abercrombie bought a 1987 Mercedes 300E. “It just finally fell apart and became too dangerous to drive,” he says. The Abercrombies now own a brace of Subaru Imprezas: one blue, one red.