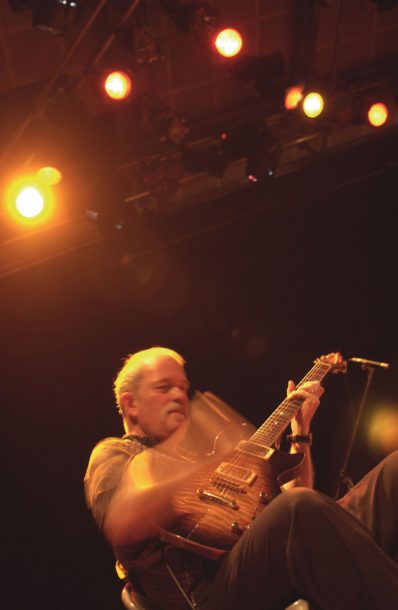 The group—Abercrombie, violinist Mark Feldman, bassist Marc Johnson and drummer Joey Baron—took the stage, all dressed in black, and began the first number so quietly and casually it almost seemed as if they were warming up. Abercrombie picked a few notes on the guitar, Feldman answered and then Baron began playing a spare pattern on the ride cymbal.

They had just finished a 10-day European tour to support their latest release, The Third Quartet on ECM. From the very start it was obvious that the band had found new ways to explore the material since it was recorded, and the entire night was a remarkable example of group interaction. The set was composed of endless moments that seemed to come together and then drift away, to divide and shift shape like organisms under a microscope.

The first number was “Banshee,” from the new album, and after the quiet start it evolved into a darkly majestic and dramatic number. Abercrombie stood to solo and as he began digging in the group swelled behind him, Baron providing rolling accents and Marc Johnson pushing with a propulsive bass. It was clear that the band was constantly in the moment with their playing, every player shifting as the music changed, with no set drum patterns or bass lines, but a loose drive, sly lyricism and open-ended trading of ideas and moods.

Abercrombie soloed with a slightly distorted edge and bent notes that suggested the trippy guitar explorations of the psychedelic rock era. When the song was over, he described their presence onstage as “a continuation of a trip that we’ve been on,” but then played with the word “trip” with a kind of stoner accent that got a laugh from the audience, but also suggested it’s appropriateness.

In fact—with its dark, mystical edges, organic forms, flights of expressive soloing and cathartic climaxes—Abercrombie’s music really is a more sophisticated and nuanced extension of the heady fusion era when albums were intended to take the listener on an inner journey. “Banshee” was a remarkable set opener, but it would be hard to sustain such intensity for a full set, and for the second number, they did “A Nice Idea,” from 2002’s Cat’n’Mouse album. The song, in waltz-time, had a much lighter feel, accented by Feldman playing the melody pizzicato in synch with Abercrombie playing the melody.

But it was not long before the music became restless again, changing and continually hinting at influences and traditions, from the classic violin-guitar lineup of Reinhardt and Grappelli, to Jim Hall-era playing, to fusion, European and American folk music, the simple scales and complex patterns of Asian and North African music, contemporary classical, small-group swing and more. It was like music in a dream: rich, beautiful, fragmentary and stirring, both strange and familiar.

Feldman and Abercrombie did most of the soloing and created melodic lines, full of feeling. Abercrombie has a way of repeating phrases two or three times, moving up the neck of his guitar, as if building momentum, and then launching himself into the meat of his solo. Feldman is the more varied player, throwing in snatches of repetitious patterns straight out of Philip Glass, or minor-scale phrases that evoke Eastern Europe, or joyful, slashing swing.

The band next played “Wishing Bell,” a slower, quieter number that began with pizzicato violin, and Baron doing playful dips in time that sound like tape being manipulated, a delightful, off-kilter effect typical of everything this band does. At times the song had almost a bossa nova feel to it, Baron using the hi-hat more consistently, Abercrombie almost comping, Marc Johnson playing a bouncy bass line. Abercrombie played a melody that was almost the verse of “My Heart Belongs to Daddy,” but then that too drifted away.

It was hard not to just sit back and watch Joey Baron’s every move. Everything he does defies expectations-even the tuning of his set and the sound he gets from his cymbals is unique. His bass drum sounds huge and rippling, like distant thunder, the hi-hat sounds more like something from Asia than 48th Street, and his ride cymbal sounds dark and exotic, not the usual light chime. He leaves the snare of his snare drum off and presses the head to change pitch. He is constantly varying what he is playing measure by measure, listening and reacting to everything, never just keeping time behind the group. At one point, grinning, he locked in with Mark Feldman, stopping and starting with the violinist’s phrases like an old-time comedian who only talks at the same instant he is being spoken to.

The group concept is clearly influenced by Ornette Coleman in the snatches of melody, the loose-but-driving rhythm section and the use of a strong bassist as an anchor that allows the drummer much more flexibility. The group closed with Coleman’s “Round Trip,” also from the new album. All the strings played the melody together, while Baron played a fast shuffle beat with exciting bass drum accents. The number was an opportunity for each member of the group to have an extended solo while some or all of the band stood aside, and at times became—of all things—real swing.