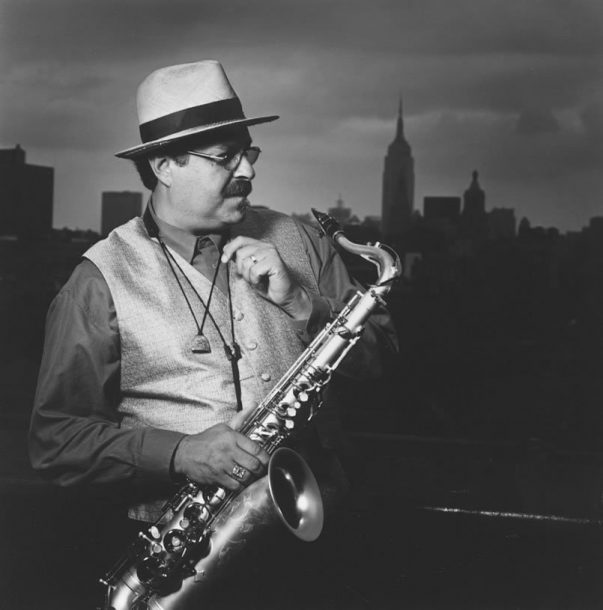 “It was in the mid-’80s up at Yale. We played a concert with the Mel Lewis Jazz Orchestra and Toshiko Akiyoshi and Lew Tabackin’s band; two big bands. They played first and had a fantastic set; then we went up to play. Our first chart was “The Interloper” by Thad Jones. It’s a fantastic arrangement, a great piece. I’m featured on it pretty much after the front melody. We play an intro, then the head and then it’s a tenor solo. So I get into my first chorus, my second chorus-then Dennis Irwin’s bridge on his bass flies off. I mean, all of a sudden there’s a doink! His bass explodes, leaving Mel and I playing a duet on the tune. So we end up playing four, five, six choruses. Meanwhile, Jay Anderson, who was playing bass with Toshiko’s band, went and got his bass for Dennis to play. They were switching basses while Mel and I were getting into it. Finally, Dennis comes back in, I play another couple choruses. I ended up playing a long time on this first tune and really got into some things with Mel, you know? It was beautiful. We went through the chart then the ensemble came back in, it went into the piano solo and we took it out. And after we ended the chart, I hear Ralph Lalama down in the saxophone section saying, “Lovano! Why does that always happen to you? Why couldn’t that happen to me?”

That whole scene that went down with Dennis’ bass and everything was just a springboard into a real explosive kind of exchange with all the soloists throughout the night. My solo kept going on and on. And Mel was playing incredibly during that period. It was around 1984, ’85. I mean, there’s all kinds of crazy stuff that happens like that when you’re playing. You have to be free and loose so you can flow with what’s happening. And that’s what happened that night. Dennis has been known to sing bass lines when he needs to but on this night he was lucky that Jay was there with his bass.”