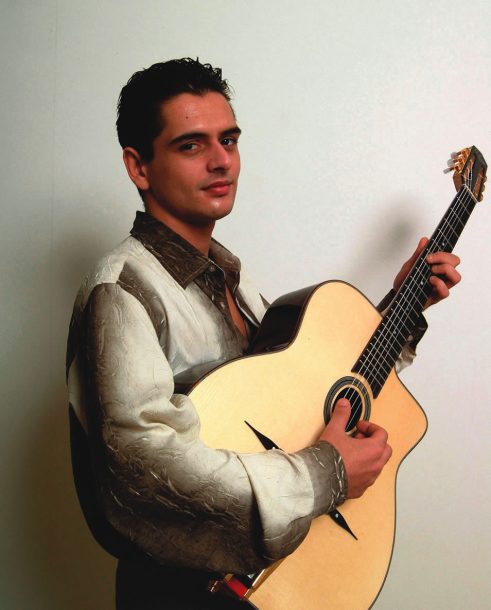 Although Jimmy Rosenberg released an album with the same name in 1994, this Swinging With Jimmy compiles 13 tracks from the guitarist’s back catalog, including the seven-part “Jimmy’s Suite” from its namesake album- along with six unreleased cuts from the same 1993-2004 period.

Born in the Netherlands, Rosenberg was barely in his teens at the time of the earliest recordings, which makes the facility of his playing especially impressive and excuses the frequent use of machine-gun-style licks as a youthful indiscretion. He was clearly working out of the Gypsy jazz tradition, and the collection features no less than three Django Reinhardt compositions. The aforementioned suite, penned by collaborator/guitarist Jon Larsen for multiple guitars, violin and bass, sounds a bit derivative of songs from that era. On the other hand, the later tracks, especially the unreleased ones, find Rosenberg looking beyond his roots and interpreting Stevie Wonder, Antonio Carlos Jobim, Nat Adderley and western-swing legend Bob Wills, adding a new twist to this divergent group of composers. The disc includes performances by Larsen, Bireli Lagrene and the late Babik Reinhardt.

With dark, mysterious good looks that complement his fretwork, don’t be surprised if the 25-year-old Rosenberg joins Michael Bublé and Chris Botti as the next marketable jazz stud.