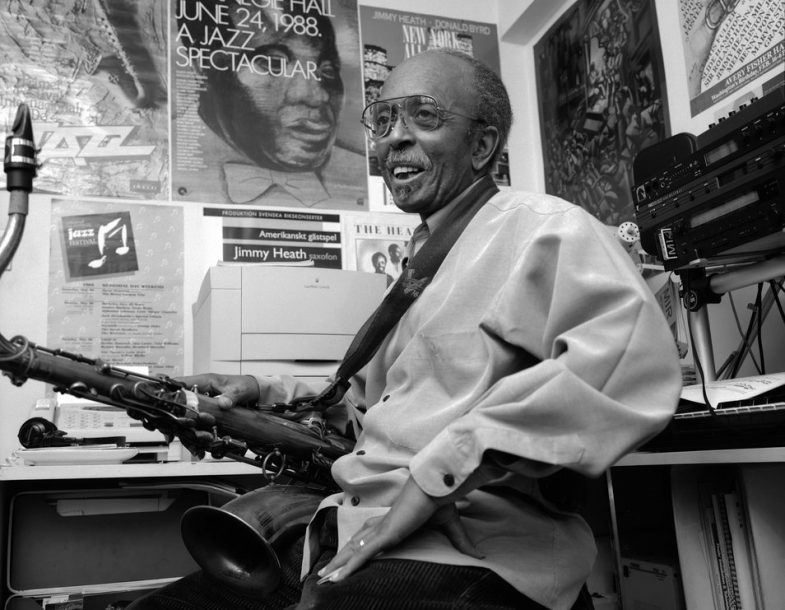 Louis Armstrong influenced many jazz players to follow in his footsteps-to Corona, Queens, that is. Clark Terry and Cannonball and Nat Adderley moved to Armstrong’s adopted hometown, and finding the place just as likeable as Pops did, they convinced Jimmy Heath to move to Corona too. In 1964, Terry got Heath an application to live in his apartment cooperative and, though Terry has since moved and the Adderley brothers have both passed away, Heath still lives in the co-op with his wife. He is the only jazz player left in the complex-or at least the only player with a reputation. When Heath is at home he upholds his reputation as a renowned saxophonist, composer and educator by working, tirelessly it seems, on making more music. “My day is comprised of either practicing the saxophone, playing the piano or being on the computer,” he explains from the crowded comfort of his music studio, a room stacked with synthesizers, saxophones and a Macintosh computer, Heath’s beloved composing tool. While many musicians Heath’s age (he turned 75 last October) continue to write charts out the old-fashioned way with pencil and eraser, Heath risks carpal tunnel syndrome like a modern man-with mouse and keyboard. During the 10 years Heath taught at Queens College (a 15-minute drive from his apartment), he learned how to make music from MIDI, but Heath is still a traditionalist when it comes to performance. “I use simulations of the sounds when I’m making big-band arrangements, but then when I get a real orchestra or band to play it, and they put the breath of life in it, then it’s real. All these souped-up synthesizers really sound like they are glorified accordions.”

We may not get to hear an update on Miles Davis’ Tutu from Heath’s synths, but we do get plenty of what he does best: hard bop. Heath’s concert schedule is always busy, playing regular gigs with his brothers, bassist Percy and drummer Tootie, or playing as a member of the Dizzy Gillespie Alumni Band. He keeps his chops in order: If he’s not out playing concerts or giving workshops and clinics at schools, Heath is hard at work perfecting his music every day he’s at home. “My life outside of music is very limited. Music-I think I was put on the earth to be a musician.”

But even the most dedicated musician has some other vice, right? “I’m a sports nut, a sports statistician,” Heath says of his secondary addiction. “When I’m not on music, in the evenings usually, I’m watching sports.” In fact, his apartment offers a view of Shea Stadium, but baseball actually ranks number three on Heath’s list of favorite sports: he prefers basketball, then football. “Baseball’s last. It’s too slow.”

Like he said, Heath’s life is very limited outside of music. If he isn’t writing music, he’s probably listening to it: Miles Davis when he’s in the car and classical music when he goes to sleep, listening through earphones. “I’m pretty eclectic as far as music goes, and having grandchildren and great grandchildren, they try and slip some rap on me once in a while.” When asked if he digs any rap, Heath doesn’t cough out a convoluted explanation about rap being another extension of the jazz tradition. No sir. Heath tells it like it is: “I like Redman, ’cause he sampled me and I made money.” Indeed, the New Jersey rapper copped a couple bars from Heath’s “Smilin’ Billy Suite” (from the Heath Brothers’ 1976 album Marchin’ On) for a recent record, and Heath doesn’t see a problem with that. “I don’t listen to it; I just collect.”

What kind of computer do you use?

Do you spend time on the Internet?

“My grandson gave me a turntable like the DJs have, a Technics. If you want you can do scratching; I don’t do no scratching.”

“Anybody to beat Shaq. I don’t like him. I like guys with more skill, not just dunk artists. I like Kobe [Bryant] better than Shaq; he’s got more skill.”

“Well, news and some documentaries, but shows? Like Oprah? Once when Quincy [Jones] was on there I watched it, but it’s not my thing to watch Oprah.”

“I’ve been listening to Dianne Reeves’ new record, The Calling: Celebrating Sarah Vaughan, which I find very, very good. The arrangements by Billy Childs are wonderful, and I wasn’t really hip to his arranging before this.”